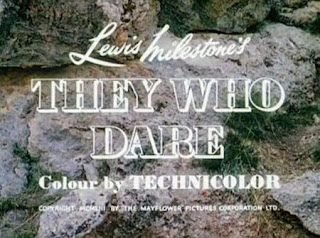 Set in 1942, They Who Dare tells the story of a British Commando Raid on Rhodes, the goal of which is to simultaneously attack and destroy two German airfields, thereby lessening the Luftwaffe presence/threat in the North African theatre, as Monty prepares for El Alamein. 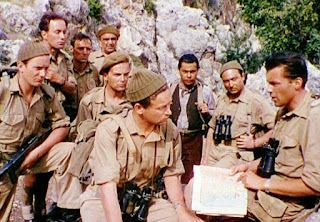 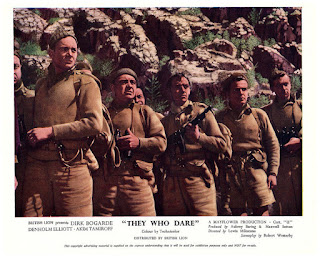 After a briefing on the Greek sub that will drop them off, at which blood red wine is spilt over the map - an ill augur, perhaps? - the mission gets off to a shaky start. First they find their eagerly anticipated water source has dried up, and then Patroklis, one of the local guides, jeopardises the mission by visiting his family, which in turn leads to one of the Greek officers with the expedition injuring himself, whilst trying  to stop him.

The first priority becomes getting water, which proves nigh on impossible. Bogarde gets into a funk, and is ready to return to the rendezvous and scrap the whole mission. But Patroklis' sister and two local shepherd boys come to the rescue, with a priest and a donkey loaded with provisions [2]. The mission is back on. The group splits into two teams, and separates, to do the job. 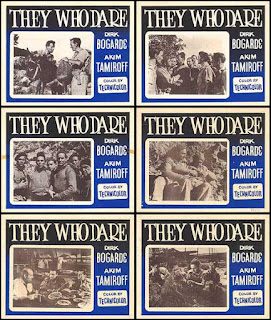 A selection of attractive period posters for the film. [3]

Bogarde - who I often find rather unsympathetic; he frequently plays abrasively self important characters - is, true to form, a bit of a toff cock. His derring-do at the airfield ends up raising the alarm. And then after that they freak out a nun at the church where they're supposed to rendezvous. She ends up ringing the church bells, thereby blowing their cover. However, that's not all that's blown.

Bogarde's six man team is down three men, and of those left one is the wounded Greek officer, whereas the other team, lead by caricature-sketching Lieut. Stevens, R.N, are all ok. But they all still have to get back to the rendezvous with the sub. This part of the film is every bit as tense and exciting as the mission itself. And mishap piles upon mishap, such that you anticipate all will be killed or captured. Anyway, I'll leave the plot synopsis there, not wanting to give it all away. 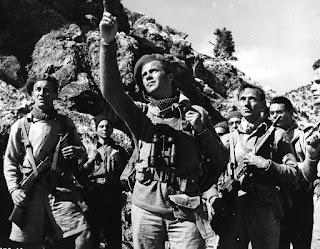 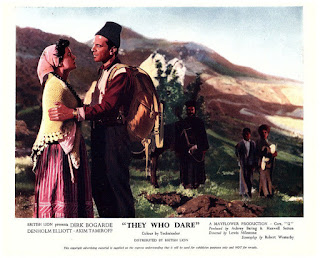 The delightfully named Alec Mango, as Patroklis, visits his relatives.

As much as I dislike a Bogarde's character, he does have onscreen charisma. A young Denholm Elliot also turns in a strong performance. Many of the other characters verge on caricature, from the portly, jovial Pappodopolous (Eric Pohlman [5]), Captain of the sub, to the rank and file Commandos, with their 'salt of the earth' banter. Having said this, all play their parts well, for all that, and they are a likeable bunch.

The Germans are, in fact, mostly Italians, including the planes. The vehicles look like a strange mish mash, but I didn't see anything beyond uniforms and guns that I recognised as definitely German, or even Italian (except the aforementioned planes). But whilst such issues of inauthentic matériel help ruin a film like Battle of the Bulge, they don't do such damage to this film. 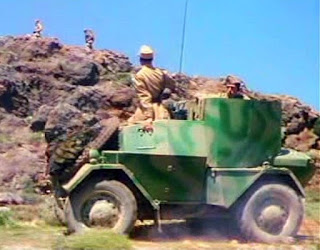 A Daimler Scout Car, badly disguised as an Axis AC.

In many ways this is run of the mill stuff, based around British pluck of a David vs. Goliath variety. But something about it - perhaps the realism of a mission dogged by so many unforeseen problems, perhaps in part the actors, or maybe even primarily the visual side? - makes it somewhat more singular. Not an out and out classic, by a long chalk, but a strong film in its own way.

[1] Milestone is most famous for the 1930 version of All Quiet On The Western Front. He also directed another film I recently watched and reviewed here, A Walk In The Sun.

[2] Let's be clear: the priest is part of the donkeys' load, he's not carrying anything! In fact, why did they bother? They should've left the priest and loaded more provisions in the donkey. I think the useless priest is included to add local Greek Orthodox colour! Speaking of which, the flute-tooting shepherd boys also serve that purpose. At one point a particularly striking looking young shepherd even contrives to save the Commandos from capture via his mellifluous noodling!

[3] I really wanted to find some pictures of the opening and closing scenes on board the sub. But, aside from the bottom left image to which this footnote is appended, I couldn't find anything usable.

[4] Self-assuredly confident they're born to lead, no matter how badly they do the job!

[5] Pohlman's submarine Capt, whilst a caricature, is endearing. I knew I recognised him. But I couldn't place him. Turns out he's 'The Fat Man' in The Return of the Pink Panther!
Posted by Seb Palmer at 23:00