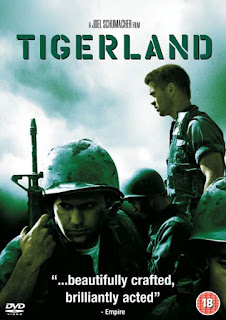 In some very loose way, Tigerland follows the format of Full Metal Jacket, being split between a big first chunk in training, at the eponymous Tigerland training centre (a U.S. Army training facility at Fort Polk, Lousiana), and a second lesser chunk, in combat in Vietnam. 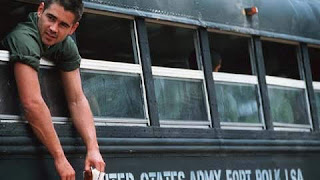 Colin Farrell, as Pvt. Roland Bozz. On a Bus... 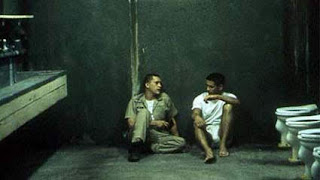 ... and with his buddy Paxton, hanging out in the latrines.

Full Metal Jacket just seems better on every level; better conceived, better executed, better acted and better directed. Just plain better. Given that Full Metal Jacket's already out there, I'm not quite sure why Joel Schumacher made this more insipid movie. 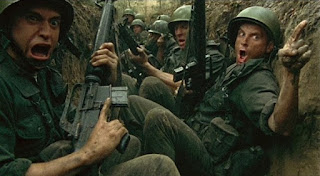 I don't remember any part of the film being as exciting as this image suggests.*

At the time of first writing this (ages ago now), I had only just watched it, very recently. And yet I could remember almost nothing about it. Other than it seemed to be a papiér-maché light edifice built of weakly acted thinly characterised clichés. I found it reasonably watchable - i.e. I got through it all - but totally unmoving and forgettable.

* Actually, I don't remember anything about this film, other than it seemed like a waste of my time.
Posted by Seb Palmer at 23:31