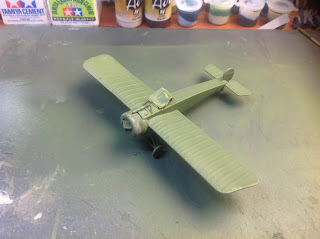 
I started this kit aeons ago, and I'm not even sure if I documented the first part of the build. Not that it really matters one way or another. At this point I've masked off the propeller and cockpit, and I'm airbrushing the base colour for the body. I looked at loads of Eindekker pictures online, and ultimately decided to freestyle in colours of my own choosing, similar to real examples, but according to my own whims. 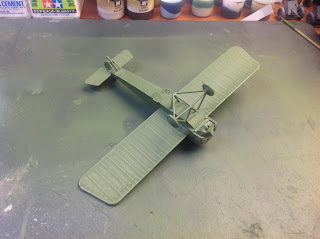 
I liked the designs that have coloured bands around the fuselage, including as illustrated on the box. So I retained that element of the design. I even copied the decals onto masking tape, to try and get approximately correctly sized stripes. But I goofed on this account, resulting in the central white band not being as wide as it should've been. Still, never mind! 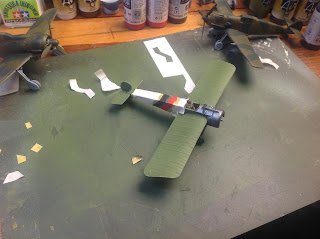 As alluded to above, there were in fact decals for the coloured bands (or the black and red ones, to be specific), but I decided I'd prefer to paint them by hand. And that meant brusha-painting them, not airbrushing them. As usual, airbrushing is both a wonderful and yet tricky and annoying process. In this instance the base green for the body of this plane was mixed from ordinary (not Model Air) Vallejo acrylics. It needed diluting a bit to get the right flow consistency. And I used a custom colour mix, as usual forgetting to make a note of the mix colours/ratios. It was easier than normal or expected on this occasion. But the airbrush did clog up, as it so often does, requiring a complete strip down and clean... again. Ah, the joys of the airbrush. 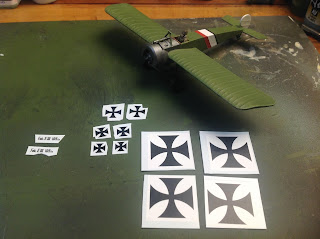 Getting decals ready to apply.


I'm still sufficiently inexperienced that every time it comes time to add decals, it's (usually) a bit of an ordeal. They stick to my fingers, they won't stay put where I want 'em, no matter what decal fix I use they don't want to lay flat or conform to the surface they're being applied to. But as they really do add a certain crisp level of finish, I want to use them. I hope as time goes by and I get more experienced, I'll get more adept at applying them. 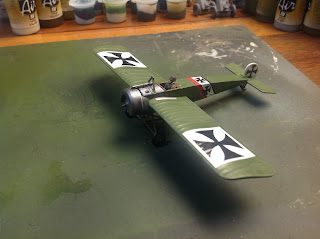 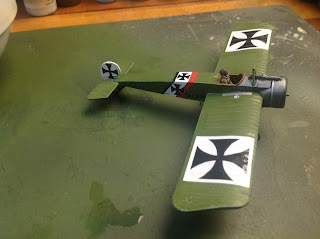 Far from perfect, but looking ok.


Yet another kit that's fairly well along, but not 100% finished. Still, I'm happy enough with how it's going. Next, another gloss coat - I did one prior to adding decals - then I need to find and add the propeller, and do the rigging. But all in all, I like this kit, it's a fun little thing.
Posted by Seb Palmer at 22:29