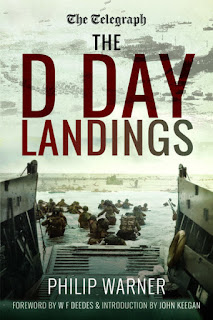 Philip Warner's superb book is in fact mostly a compendium of accounts by men who took part in the manifold aspects of D-Day. The quality of these correspondent's writings is variable. But the best stuff is absolute gold.

Warner opts to deploy his sources in a chronological-cum-thematic manner, which is good, as we can concentrate on one strand of action at a time, such as airborne drops, or the naval contribution, tanks, infantry, and so on, and thereby see how the bigger picture unfolds through multiple colourful facets, adding up to an exciting kaleidoscopic view of the whole.

Here's a list of the chapter headings:
I  Invasion from the Air: The RAF, the Gliders and the Parachutists
II  The Navies
III  On The Beach - The Sappers and others
IV  The Armoured Corps
V  The Infantry
VI  Marines and Commandos
VII  Intelligence and Signals
VIII  The Medical Services
IX  The Royal Army Service Corps
X  The Canadians
XI  The Royal Artillery
XII  The Chaplains
The French Viewpoint

The above list conveys both the arrangement of the books contents, and the scale and scope of Overlord itself. One thing that consistently emerges from the many vivid and moving testimonies that appear here is awe at the scale of it all. The book appears under a banner for The Telegraph newspaper, as it was in their pages that Warner published a letter asking for survivors of D-Day to contact him.

Philip Warner's own part in the content is quite minimal, consisting of brief introductory remarks for each chapter, and the selection and arrangement of the firsthand testimonies. These are, unsurprisingly having been collected in the U.K., very much weighted towards the British perspective. Americans and Canadians are mentioned in passing (the latter even having their own very brief chapter), but this is an avowedly and unashamedly Anglo-centric account.

What makes this particular book really enjoyable - thrilling, I would say - is the patchwork quilt of very personal stories. These range from the drily formal 'At 06:00 hours, we...' etc, to the very colourfully anecdotal ('we breakfasted on whisky and Mars bars'!). But, whilst none are Pulitzer Prize winning professional journos, the quality is, by and large, superb. Sometimes poignant, often funny, filled with both pride and humility, and replete with fascinating detail, they bring this gargantuan operation vividly to life in a way little else can.

I absolutely loved this book, and highly recommend it to anyone with an interest in this most momentous day. In one word: brilliant!
Posted by Seb Palmer at 23:36