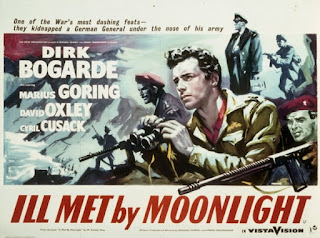 I decided to re-watch this classic WWII 'true-life' thriller having just read Nigel West's Secret War, a history of the SOE.

Ill Met by Moonlight, based on the memoirs of the same name by former SOE agent Stanley Moss is, fortunately, a Powell and Pressburger film, and that means excellence. 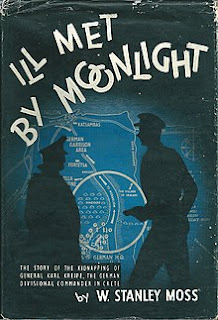 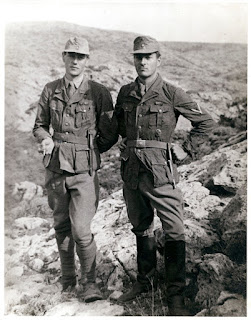 Stanley Moss and Leigh Fermor in their German disguises. [1]


Set on Crete, SOE agent Patrick Leigh-Fermor forms an ambitious plan to kidnap General Friedrich- Wilhelm Muller, the German commander on Crete, notorious for his brutality [2]. However, in typical SOE style (see West's book for more on this theme), by the time the mission goes ahead, Muller has been replaced by Kreipe. Rather than abort, the mission goes ahead, only now with a different target.

This small but significant detail is omitted from the film, which starts, after a brief visual and musical intro to the themes of Cretan freedom fighters and the beauty of the island, by introducing us to Leigh-Fermor, catching a local bus toting a sack of potatoes! Very soon, however, he's planning the op with a local Cretan resistance chap on the terrace of a saloon. 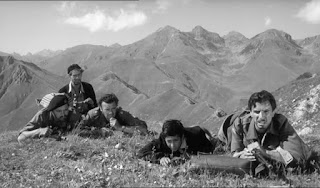 You'll want to visit Crete after watching this.

To the filmmakers' credit the island itself, its ruggedly arid mountainous topography having a rather savage beauty and grandeur, is as much a character in the film as any of the human (or animal*) players. In this respect this film reminds me of They Who Dare, which is also set under the scorching Mediterranean sun. Music is also used very well, mixing typically filmic atmospherics (I adore the mournful piano and clarinet theme played as the guerillas trek through the countryside) with Cretan folk styles - including a frantic 7/8 motif - to great effect.

The film celebrates the enthusiastic amateurs of SOE as plucky Brits, very much public schoolboys up to their japes, and looks rather quaintly dated in this respect. West's book on the SOE is at pains to point out that for numerous reasons, typically including both internal political wrangling and brutal German reprisals, locals weren't always as cooperative or fond of such Brit adventurers and interlopers as is suggested here. 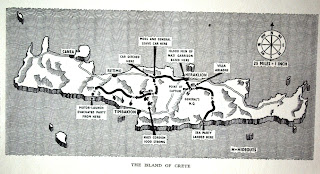 A useful map, from the book. The film uses maps to help as well.

The bulk of the film is given over to first the abduction itself, which is a terrific bit of real life James Bond type derring-do, and then the eighteen day trek through the mountain wilderness before a hoped for extraction. The drama throughout is superbly done. And we grow to love all the major protagonists, from our plummy heroes and their salt of the earth local sidekicks to Kreipe, who isn't such a bad egg.

I've yet to see a Powell and Pressburger film I don't like - Colonel Blimp is an out and out masterpiece, in my view - and Ill Met by Moonlight is one of several excellent WWII era films (another I re-watched recently being Battle of the River Plate, about the sinking of Graf Spee) they made. The only reason I dock half a 'kreuz is on account of the 'jolly hockey sticks' style sanitisation of these purveyors of state sanctioned murder and mayhem. [3] 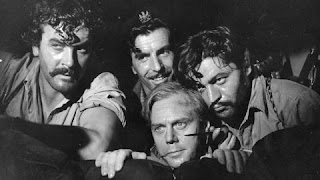 Kreipe in the tender care of his Cretan abductors, movie style. 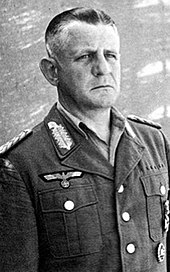 * Perhaps to emphasise the rustic nature of the island and it's people a few animals - dogs, goats, donkeys - feature in a prominent and endearing manner!

A short documentary on Kreipe's abduction can be viewed here, on YouTube. Rather amazingly, the Gerneral and his kidnappers were reunited on a Greek TV show, in 1972. A brief clip from this can also be found on YouTube.

[1] The taking of the photographs from which this example is drawn is a scene that features in the film. These and numerous others can be viewed online, here. 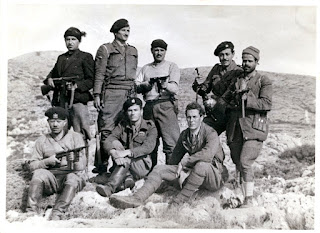 [2] Known as the 'Butcher of Crete', Muller committed atrocities against civilian and military targets throughout the war, in numerous locations, eventually being tried and executed for these actions by the Greeks.

[3] The expected German reprisals for Kriepe's abduction and other similar/related partisan style actions were in turn subject to partisan reprisal. SOE operatives, including Moss, being implicated in the murder of a number of German soldiers who had surrendered after being ambushed. 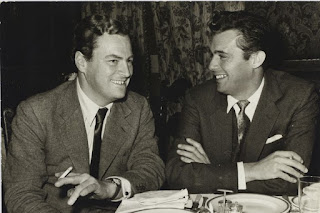 Leigh Fermor and Dirk Bogarde, who plays him in the movie. 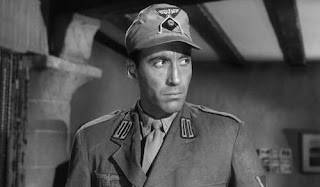 Christopher Lee has a brief cameo.