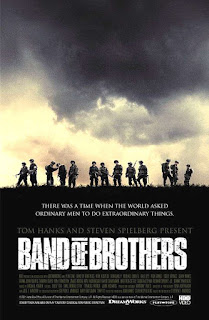 NB - Another unfinished post from the vaults is dusted off and put online.

As I type this I'm watching 'Points', the tenth and final instalment of the Band of Brothers TV series. I'm starting to lose count of how many times I've seen it now. This - perhaps my fifth or sixth viewing - was possible thanks to being laid up with a cold; every cloud has a silver lining, eh?

Based on the book by Stephen Ambrose, Band of Brothers is ten episodes long, and follows Easy Co., 2nd Battalion of the 506 Paratroops, 101st Airborne Div., from training in the U.S. to wars end in the territories of the 'Third Reich', via England, France, Belgium and Holland. 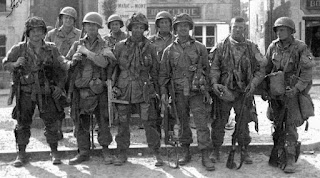 Soldiers of the real Easy Company. 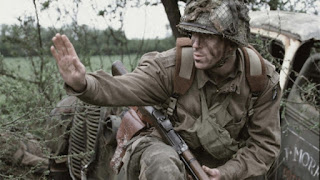 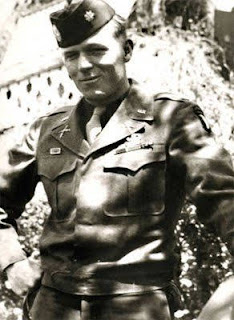 An ensemble piece, with different episodes following different characters, witn Damian Lewis' Richard Winters character at the centre of the story, it seeks - and very largely succeeds - to be both accurately historical, and compelling TV drama. There's some license with history, mostly compressing stuff to fit it into the narrative, with little that's plain wrong (although there are, as always in such human endeavours, errors and ommisions).

Costing $125 million, it was the most expensive TV-miniseries ever, until eclipsed by companion piece The Pacific. Largely filmed in England, with some 'Fatherland' segments filmed in Switzerland, it's a properly epic production, superbly staged. Fussy gear buffs will love the accurate materiel. My only gripe on this front is the fake snow in the winter scenes (Bastogne, Foy). How all this was done is shown in the DVD extras. It's incredibly impressive. 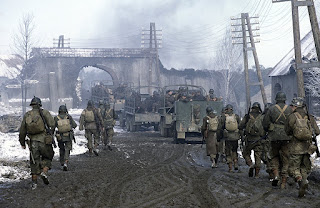 The production is spectacular. [1] 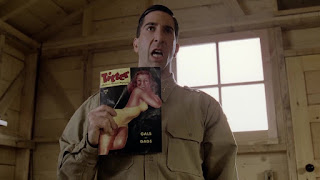 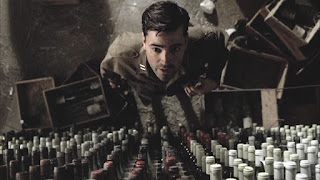 For Ron Livingston's Lewis Nixon, fond of a drop of Vat 69, Goering's private cellar is heaven.

The cast are, by and large, superb. And one really does become drawn into the stories of the protagonists. I'm certain I'm not alone in 'googling' various characters and events as I watched this each time, to correlate history with events as they're depicted here. It's obvious from info on the web that the series has spawned an immense amount of interest in this period of history, which has to be good.

Of course there's an important difference between drama and history. And sometimes it seems people who've seen this take it as unadorned fact. Of course it isn't. Tom Hanks and co. have obviously aimed for accuracy, authenticity, and so on. But he and his team have also been candid about the process of turning history into TV drama. 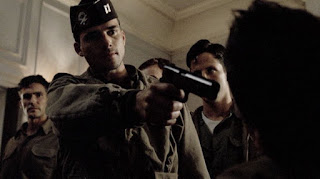 A tense moment... the series doesn't shy away from the darker aspects of war. [2]

Atrocities by both sides are shown, and the ambiguities and the fog of war have their part to play. Both sides are also depicted with a clear even-handedness, sometimes even surprisingly so. The Holocaust is covered in the 'Why We Fight' episode, but we are not spared scenes of summary executions of Germans, or even 'collateral damage' in the Allied ranks.

All facets of the war as these guys experienced are covered, from jump training at Taccoa, in the U.S, via England and D-Day, to France, with Bastogne, Foy and Hagenau, en-route to Bavaria and Austria, winding up at Berchtesgaden, and Hitler's 'Eagle's Nest'. From r'n'r, and training and supply behind the lines, to the mud and blood of conflict, there's stuff here for most tastes. 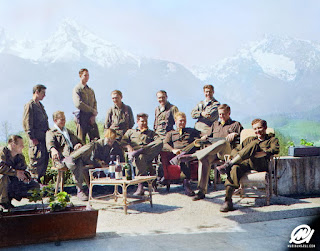 The real Easy Co. at The Eagle's Nest. 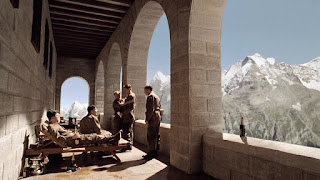 And a similar yet different view of the HBO scene.

One notable absence is any concession to a romantic subplot. I don't miss this, as such threads in this kind of drama are all too often incongruous distractions. It's interesting that in The Pacific there's a clear choice include this usual staple of even war dramas. The Pacific is a bloodier and more intense series, combat wise. Judging the two series against each other is tricky. For a whole I thought I preferred The Pacific, after first seeing it. Now I think both series are brilliant, and probably about equal in merit.

Some might think Hanks and co., and indeed America as a whole - the term 'The Greatest Generation' became a popular description of the generation that fought WWII - continue to be over-reverential in their attitudes to the war. Michael Kamen's magisterial and mournful signature theme (influencing war movie theme-music worldwide that came after!) captures this feeling. That may well be true. Whatever the case, Band of Brothers is a superb achievement, and a terrifically compelling and enjoyable TV-series. 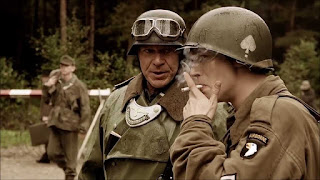 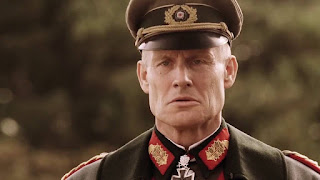 To their great credit, BOB gives due respect to the German army, perhaps best of all in a moving speech delivered by Wolf Kahler. 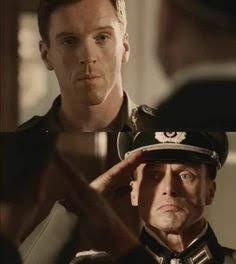 [1] I think I heard, or read somewhere, that quite a lot of the filming was done in Hertfordshire. Or if not Herts, then certainly somewhere in England.

[2] This particular scene, from the final epsode Points, is perhaps one of the most harrowing. Another is the summar execution of a former (presumed) German soldier, in an idyllic bucolic pastoral setting.
Posted by Seb Palmer at 16:38