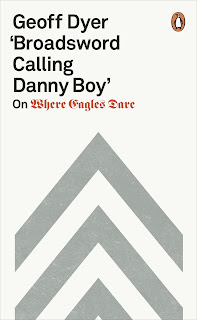 Geoff Dyer uses the same (admittedly very obvious) choice of title for his book as I used for my Amazon UK book review of the classic 1969 WWII epic, Where Eagles Dare. This fun little Penguin paperback, published ahead of the films 50th anniversary, essentially embeds a pretty thorough plot synopsis into a more wide-ranging socio-cultural ramble.

This little book is totally up my boulevard: a relaxed multifaceted review-cum-synopsis of a 'classic' WWII blockbuster. I suppose I'm almost bound to like this, as I write similar-ish if much shorter reviews here. I originally gave the film itself just four stars, because, whilst I do actually love it, there's a lot to be critical of as well. If you're interested, my review of the movie is here. 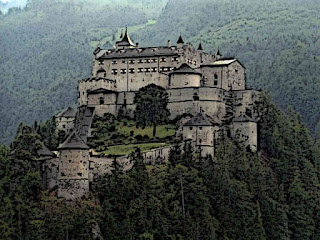 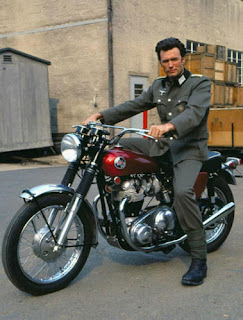 Eastwood on his Triumph, during filming.

If I was being harsh I'd give this semicentennial, or golden jubilee 'celebration' of the film just three balkenkreuz. It's very flippant, and slightly self-consciously pleased with itself, in terms of wittiness and cross-cultural cleverness. But, as Dyer makes clear when he quotes Clive James on the subject of film itself, it really is, like the film, damn good fun. Especially if you already know and love the subject. Which I suspect the target market for this will do.

References to childhood viewings, Action Man dolls and their outfits, Airfix kits, and other books and movies, often of similar vintage or subjects, but sometimes casting the net wider (as an art and art history bod, finding a book such as this referencing Anselm Kiefer's art, and mentioning auteur Tarkovsky with great reverence, was refreshingly unexpected) is very soothing and gratifying. So much contemporary cultural production alienates me. It's nice to find something that does the reverse, and resonates or chimes with my own interests. 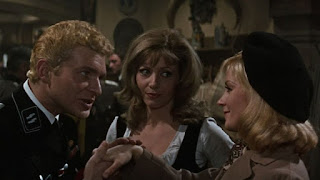 The only reason I'm giving my copy of this book four and a half balkenkreuz, and not five, is that my free Amazon Vine review copy is a proof edition. Perhaps the real thing will, as well correcting some editorial mistakes and having a nicer cover, also have some pictures? In a book about a film, that'd be a bonus! As already mentioned at the top of this review, the book basically tells the story of what occurs onscreen. And does so pretty comprehensively, and with plenty of wit, and many a cross cultural reference. If you like this sort of punditry - sometimes I do, sometimes I don't - you should like this.

One Amazon UK reviewer claims this book adds nothing to the enjoyment of the film (but they don't like the film to start with!). I disagree. The book explores, albeit briefly and lightheartedly, a much broader set of ideas that the film triggers, from the ahistorical anomalies - such as Eastwood's post-Elvis hairdo, or the postwar American helicopter [1] - to the sexual under/over-tones, and the mythology and romance that the massive post-WWII film industry (and other mythmakers, such as former SOE agents turned historians) have propagated. 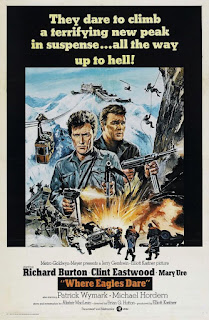 An old poster for the movie. 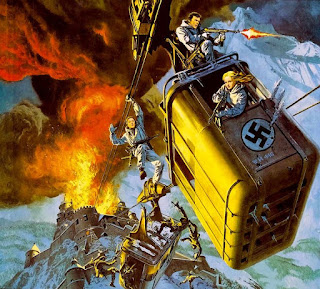 And this one's a stunner; vertiginous and explosive, like the film.

A short easy read. I read my copy in two relaxed Sunday sittings, the day it arrived. And, dammit, in the time it's taken to finish this review, I've decided that both book and film are going to get five stars, because, frankly - and for all that's wrong with either - I love 'em!

[1] The Germans did actually have a few helicopters by the end of the war. Just not any postwar American ones. 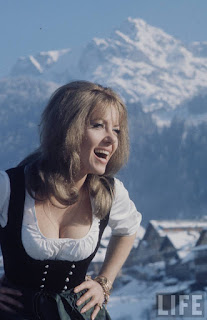 The twin peaks of Ingrid Pitt. [2] 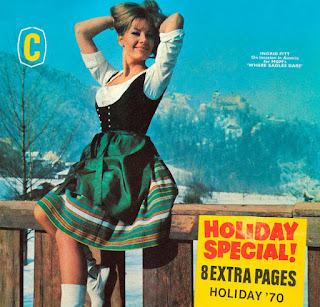 Book me a chalet, right away...

[2] Pitt survived three years in a Polish concentration camp, during WWII.
Posted by Seb Palmer at 18:08