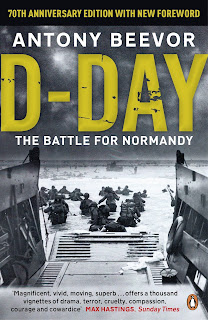 This is my third Beevor WWII book (the others were Stalingrad, and Ardennes, 1944), and I have to say that, for my money, he's arguably the best and most seductively exciting author currently writing, in a very crowded field. For once, we have here a book that really does live up to the dust-jacket hype. As Dominic Sandbrook puts it, Beevor undoubtedly is 'a master of narrative, expertly blending the grand sweep with the telling anecdote'. 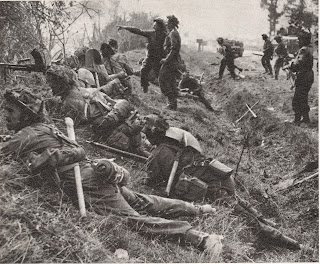 The title D-Day is a bit misleading, but is thankfully made good by the subtitle: yes, this book covers the D-Day landings - and does so very well - but it's given over more to the ensuing campaign, the Battle for Normandy, in north-western France. The relationship between the Allies is interesting, and Montgomery doesn't come off too well in Beevor's accounts. There's some tension and communication failures, leading to bogging down, particulalry, it would seem, in Monty's sector, where he often put an overly positive gloss in events, such that the gap between his reports and reality created tension with the American and Canadian allies, and even many of his own British colleagues and subordinates. 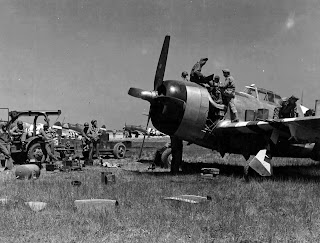 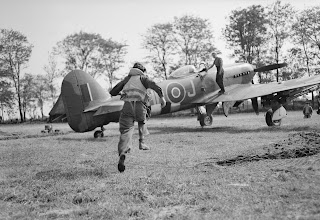 An RAF pilot scrambles to his Typhoon, during the Normandy campaign. 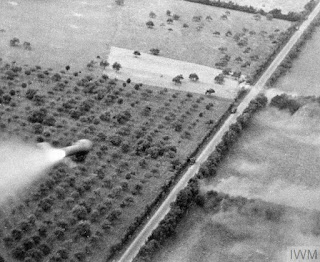 A pilots eye view, as a Typhoon fired its rocket(s) at what one hopes is a German column. 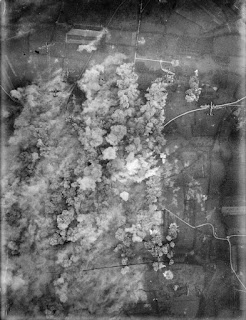 What an aerial bombardment looks like from above the bombers and their target, in this instance, the unhappy Villers Bocage. 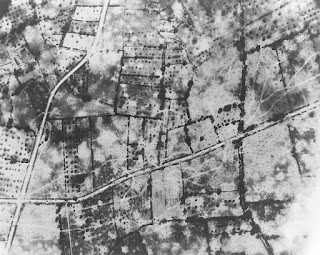 And the devastation wrought by aerial bombing. [2]

Allied aerial dominance is a very strong theme in their victory. But, as ever, bombing proved to be a very inefficient blunt instrument, often causing collateral damage, sometimes aiding the German defenders (although also damaging them materially and traumatising them psychologically) and hampering the Allied advance, and certainly never delivering what it's apologists claimed for it.


With military histories such as this, which cover an immense amount of activity, any one of which myriad elements might merit a sizeable book itself, condensing events into a brief, readable synthesis, it can be bewildering trying to follow the numerous parallel threads. I feel Beevor handles this aspect as well, perhaps better, than most. 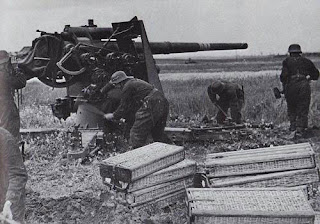 Whilst the Allies feared Tigers and Panthers, Beevor argues the 88mm was one of Germany's most effective weapons.

Yes, despite the numerous maps included, it can be rather confusing. But this is as clear an account in one reasonably sized book as you're likely to find. And the scope is huge, from the landings themselves, to the numerous follow up operations, with such extras as Stauffenberg's bomb plot and attempted coup, and the Paris Uprising, all succinctly and adroitly told in an exciting, compellingly spare prose.

After covering the landings, beach by beach, we follow the numerous operations, such as the British Epsom and Goodwood (both of which proved to be, as Beevor notes with irony, anything but 'a day at the races'), the Canadian Operation Totalise, and the most vigorous and successful breakthrough and breakout, that of Patton's forces in Operation Cobra.

It's the 'mass of unfamiliar sources, fresh voices and untold anecdotes', as fellow military historian Max Hastings pithily puts it, that really make this such an exciting read. Beevor does this sort of thing with such an easy fluency that it belies the great skill needed to write military (or indeed any) history with such verve. And his sources range from the top brass to the grunts. Beevor has always been notable for his ability to effortlessly shift gear from the higher echelons to the mud and blood of ground level conflict. And I have to say I love his books all the more for it. 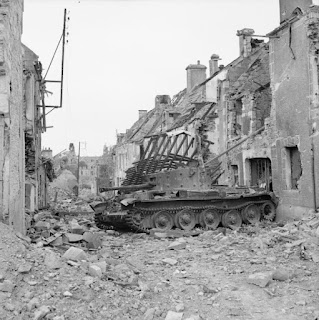 A knocked out Cromwell amidst the ruins of Villers Bocage. 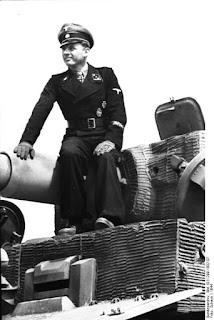 Whilst it's definitely good to have author's like Beevor not banging the nationalist drum - indeed, for some native readers he's overly critical of the British part, and Monty in particular - some might suspect him of sucking up to his prospective American readership. All things considered, the more I read Beevor on WWII, the more I admire his skill as an historian and storyteller. If you want military history writing that excites, informs and inspires, his books - and this one is a peach - are a good place to start. 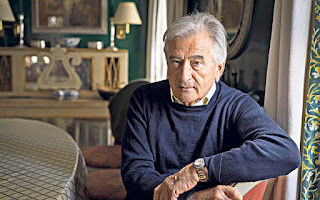 [1] Except for the cover image, this is the only photo on this review that also appears in this book. The rest are harvested from the interweb at large, with many sourced from Wikipedia.

[2] I forgot to note where this image depicts, but I don't think it's the same as the one above, which is Villers Bocage.

[3] Veteran 'Tiger Ace' and, for the Germans at least, hero of the Ostfront, Wittman was eventually  ambushed and killed during this campaign, by Shermas such as he had hitherto been so effective in destroying.
Posted by Seb Palmer at 13:11