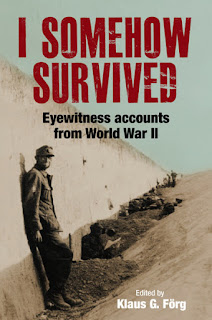 This is an English translation of a recent book originally published in Germany, which collects the testimonies of five Bavarian survivors of WWII. All were over 90 at the time their tales were collected, the oldest being 106! Four are military personnel, whilst the fifth is a Norwegian woman, who - depsite her socialist father being forced into hiding, and her mother winding up in a camp - married a young German in the Kriegsmarine.

In the foreward Roger Moorhouse notes that this is part of a trend of recent years of allowing the voices of Germans into the pool of English language recollections, and as such a useful balance to years of largely one-sided history. I would qualify that a bit by saying that, whereas whilst most postwar German testimonies came from the bigwigs, or their friends and families - from Albert Speer's famous 'struggle with the truth' to the memoirs of people like Doenitz or von Ribbentrop, the latter's son writing his father's memoir - there have indeed, more recently, been concerted efforts to hear the voices of the 'everyman' (and woman) participants.*

My favourite of these is the first and longest, in which Georg Weiss recounts his arduous and colourful Ostfront service. Other stories include the long peregrinations of Sepp  Heinrichsberger, who, serving in France, winds up a POW in America, before undergoing a postwar oddysey in his quest to get home. Franz Blattenberger, an artilleryman, has a similar tale about his lengthy flight to ultimate postwar freedom, in which a keynote is the randomness and luck of survival. And Siegfried Schugman was a frustrated Luftwaffe man, who never got his wings, but wound up glad of it.

All in all, an interesting and very easy read. I read the entire thing in just one day, and that whilst also doing numerous other things. There are no truly mind-blowing or even very shocking revelations, to be truthful. Especially not if you've read a lot on WWII, as I have. But it is always refreshing to hear the German side of the story. The recollections seem pretty open and candid, and the supporting photos help reassure one. But - and no disrespect to the researchers or contributors - this is verbal or anecdotal history, and must therefore be treated with a certain amount of caution and circumspection.

* In respect of the latter, Tim Heath's several books on women's experiences in the Third Reich spring to mind.