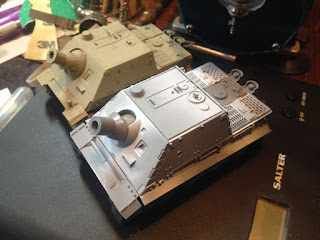 The image above conveys how much larger the 1/72 Build & Play Sturmtiger is than the 1/72 ICM model. Not a deal-breaker for me. But it's almost the same degree of difference as you get between 1/76 and 1/72. I've decided to detail the B&P kit a bit. And I've started with zimmerit, the transportation hooks on the casemate, and a little judicious filling here and there. 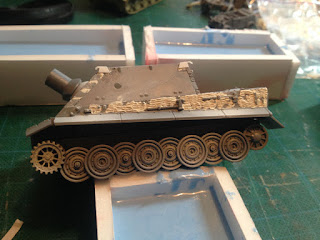 I need to find a better way of doing zimm than my current m.o. Which is fiddly and frustrating. I'm using superfine Milliput. In this instance I even sanded the super smpoth styrene surface a bit, to try and improve adhesion. But it's a real bugger getting the Milliput both thin enough and covering all the required areas. As you'll see here, I've left a good deal of 'oh, the zimm's been knocked off' areas. Especially on the sides; working round the imtergrated tool detailing was just too much of a headache! 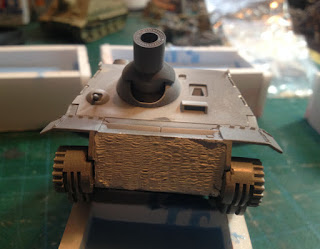 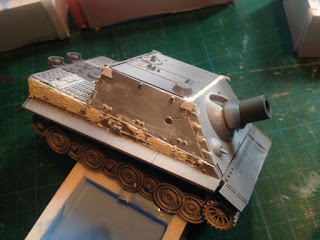 I used the Milliput to fill in the welding lines on the slopes of the casemate front, where the way it's been rendered by B&P is wrong. I'll be going back in to score crevices at the correct angles soon. I also scratched in some weld/plate irregularities, such as you see on these behemoths in museums. I'm hoping all this white Milliput stuff is going to look much better when the monster gets painted. 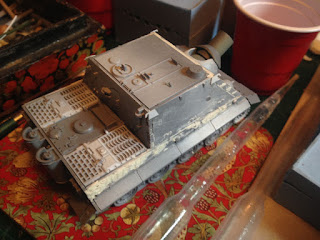