Misc: Current Armour, on the go... 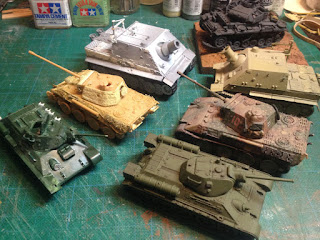 Oldies and newbies.
With a nice kind of symmetry, here's a bunch of older models, and my current crop. Amongst the older ones, the first WWII mini-military model I made on returning to these ol' hobbies, the 1/76 Airfix Panther, in late-war 'ambush' type camo'. This remains one of very few completed models, thus far. The vast bulk of my kits require varying degrees of painting/finishing.
The latest bits of building, today and yesterday, were the rear bins on the newer Airfix Panther, and a second go at the mortar crane/winch, on the B&P Sturmtiger. Whilst I was at it, I also changed the Sturmtiger's upper casemate access hatch handles to wire ones. Looks nicer, methinks. 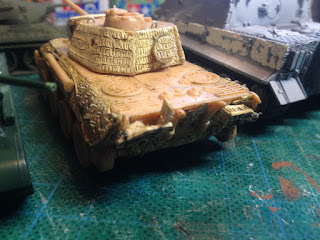 Rear stowage bins on ye olde Panther, one open.
I really took my time and had a look at a load of ref for the second attempt at the winch. And I think it's come out okay. Nicer, indeed, than the one on the ACM Sturmtiger. I also roughed up the 'fenders' a little, and added some dings and hits to give the ol' beast a more worn in look. I'm looking forward to painting the Sturmtigers. I think I'll go for one of those late war funky three colour disc camo' patterns. 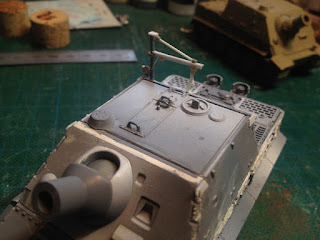 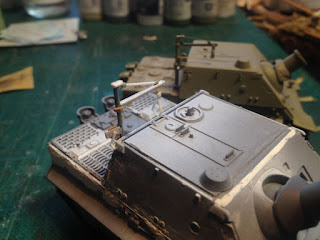 Suitably chunky for this rather oversize model. 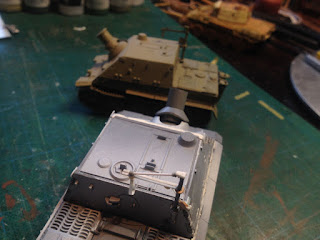