Since recently building a Hasegawa 1/72 Flak 36, and buying the Haynes 'manual' on this famed WWII workhorse (in its several types), I've kind of gone a bit nuts for the 88mm! I just bought another Hasegawa 1/72 kit, this time the Flak 18 variant, and a second 1/76 Airfix kit. The plan is to build these sans armoured shield. 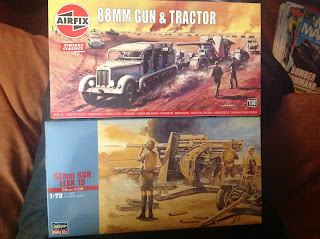 One detail that emerged from studying the Haynes manual on the 88, was the absence on most 1/72 or 1/76 kits of any 'erdpfahl', or stakes, on the articulated side legs/arms of the cruciform gun mounts. I need to check, but I think the Zvezda 1/72 models might have them. Certainly the Airfix and Hasegawa don't. A desire to scratch-build these little doodads - used to help cope with gun recoil - perhaps even to batch-produce some in resin, is thus born!

The erdpfahl, or stakes, are labelled in this German diagram. 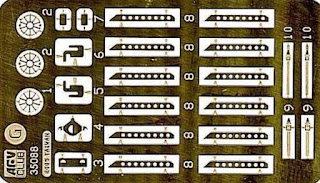 Interest in other details, such as the presence or absence of the crew shield, and how that's mounted (the Zvezda is the best of the kits I've made so far by a long way, in this latter respect), or the rolls of cable on the bogies, and how these facilitate the communications wiring of the guns electronics, starts to rumble into life. Details like the sextant, dials and fuse-calibrator all start to seem more important.

And then there's the issues of deployment and transport: on or off the bogeys? And how about guns with recoil, or mid-firing? What about prime-movers, or guns mounted on vehicles, or even buildings? And how about the 128mm or even 150mm cousins of the 88mm? And I still haven't addressed my latent desire to sculpt my own crews*... This hobby certainly taps right into an obsessional part of the nervous sytem, no doubt about it!

The short video above, with a primitive but effective soundtrack added, uses archival WWII footage (much of which is also colourised) to show the 88mm in action. Fascinating! It leaves me wanting to convert at least one model so as to give it recoil, or depict it in the firing/recoil state.

* I ordered a resin casting kit from a company called Sylmasta.com, with a view to making various parts, like the erdpfahl, some ammo, and perhaps even some crew figures.
Posted by Seb Palmer at 08:41