This post is the one-hundredth of 2019. That's the most posts in any one year so far, since I started in 2014. And there's still one-third of the year left. So I'm in pretty good shape for a bumper year of blogging. It also seems to me like a good moment to take stock. What have I achieved, both in blogging and more generally? Am I happy with what I'm doing? And all that sort of thing. 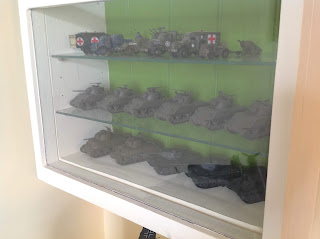 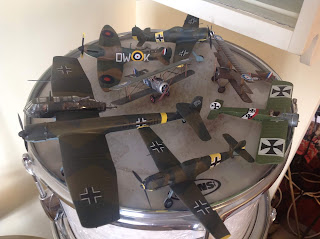 My motley selection of wings. Just two are actually completed.

First off, however, a word on my 54mm Napoleonics, as they've been my latest practical hands-on modelling project. I've more or less finished the three Frenchies, pictured in the next section of the post, below. But I have yet to even make a start on the two British figures. I have a feeling that I'll be taking a break from 54mm figures for a spell, and getting into my languishing 6mm and 10mm 1812 armies. That's an area I'm less happy about; the inactivity on that (Eastern) front!

One noteworthy development of 2019 was an invitation to review for Pen & Sword. I've been an Amazon Vine reviewer for a number of years. But, rather annoyingly, and despite getting lots of great stuff, almost none of it has been related to my mini-military interests. Andrew Roberts Napoleon The Great, for example, was given out to some Vine reviewers. But not, alas, to me. I love being part of the Vine program, But that really galls me! I wouldn't be surprised if I was amongst the most history and Napoleon obsessed of their reviewers! Hey ho...


But afore I go any further, yesterday's and today's activity, modelling wise, was further work on my 54mm Nap's: I did a tiny bit of touching up here and there, including some gloss varnish followed with washes (braid, horses mane, that sort of stuff), and a couple of coats of matt varnish. This time, with the latter I managed to be a bit more patient and methodical, thereby avoiding the dreaded clouding. 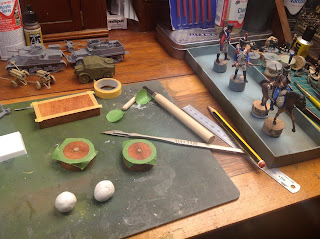 Rosewood bases, masked, ready for Milliput 'soil' to be added.

The pictures immediately above and below show the other thing I did yesterday, which is beginning the basing. I cut the bases from Indian Rosewood, on my bandsa and a hole cutting bit. They required quite a bit of sanding, and the circular ones needed the central drill-holes left by the hole-cutting bits  filling. I then masked a 5mm band around all the bases, built up Milliput 'earth', and tidied it with various tools so it follows the edge masking. 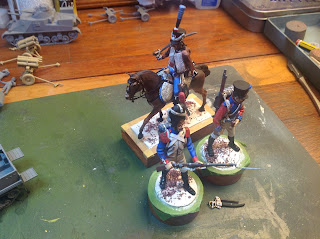 Figures on their bases, Milliput and gravel earth built up.

Scenic gravel and stones were then added, after which I marked mounting points from the base of each model, using the wire I'd glued into the feet/legs of each figure to mark the positions of the desired holes. I used a pin-vise drill through the still soft-ish Milliput and the wooden bases, which worked fine. Once the models were pinned in, and pressed into the Milliput, I used some liquid superglue to secure the models and the gravel in situ.

I'll let them dry and harden overnight, and start in on painting tomorrow. If poss', I'll add grass then as well... we shall see! 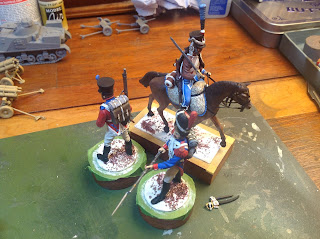 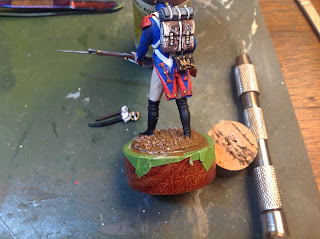 Well, it's now 'tomorrow' today, and I've painted the 'earth', and added some more gravel. I also attached the Guard Grenadier's scabbards with a tiny little metal pin, as they'd fallen off two or three times, and I was getting fed up with gluing them back on, especially as it entailed repainting that whole area, the gluing process having messed up the paintwork. 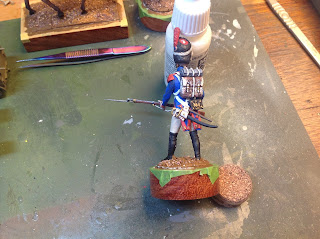 Scabbards superglued into position. Will this do the trick?

I'm now letting everything sit awhile, myself included, as I type this. And then it'll be time to add some grass. Think I might watch a YouTube vid or two on the subject first, to see how to go about it! I seem to recall folk using diluted wood glue... let's find out! 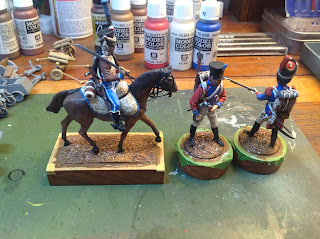 Bases ready for the addition of grass.

All of this recent stuff, WWII vehicles, planes, 54mm figures, book reviews, are digressions from my 6mm and 10mm Russia 1812 stuff. But there's no sign of any let up, and I'm tending to go with the flow. After all, this whole mallarkey is, for me, chiefly about allowing myself self-indulgent pleasure. And it's doing that aplenty.

A recent trip to Ely inevitably found me furtively sneaking into the City Cycle Centre model department. They've rearranged their stock (again!), and now have some models by a brand that's new to me, Forces of Valour. I decided I'd check out their King Tiger model, as I've been wanting to build a version of this mighty metal monster Sorcifically done out in the obscure but fascinating 'octopus' camo' scheme. 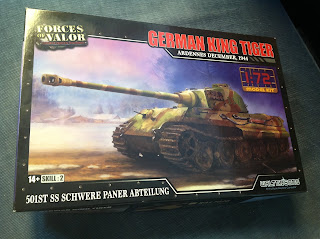 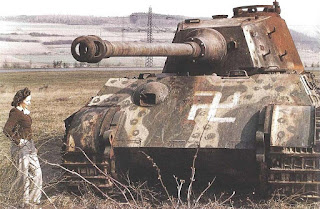 And this is the camo' scheme I intend for her.

In the meantime, however, I'm still working on basing my French Napoleonic dudes. Here are few pics showing how that's progressing. The plastic bottle with extra holes in the top is a home-made 'static grass' dispenser, based on an idea I've seen online; you simply shake the container vigorously, and both it and the grass being plastics, some static ought to be imparted to the latter. I did an A/B test on two bits of cork. The one at left had the static bottle treatment, the one at right didn't. I can see no discernible difference! 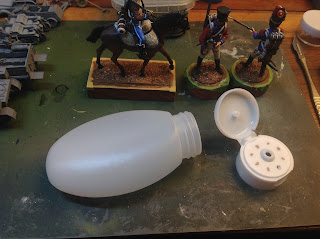 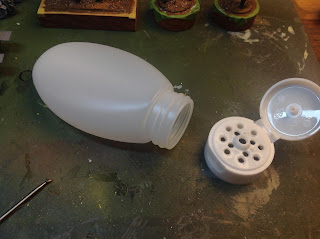 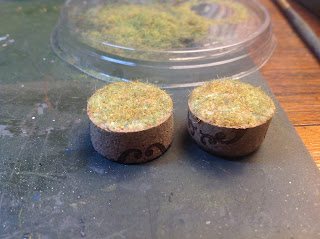 Left treated, right untreated... hmm!? They look identical to me. 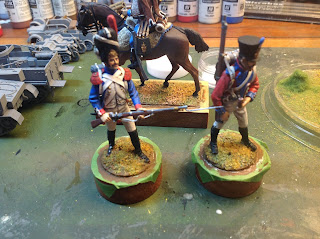 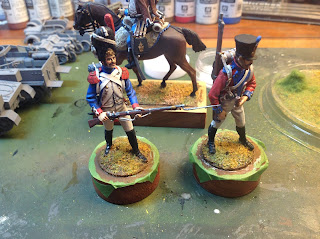 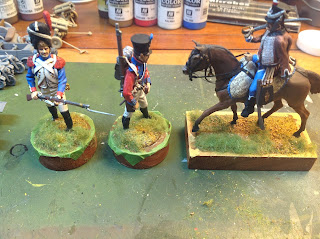 A liberal second covering, prior to 'shakedown'.

In researching basing I've learned a fair bit by simply watching a number of YouTube videos, some of which I already knew, such as flock and static grass being two different things, some of which I didn't; commercially available static grass dispensers are very expensive! One of the videos, by model railway scenery builder extraordinaire Luke Towan, shows how to make your own DIY dispenser. I think I'll be doing that at some point! In the meantime, I tried to emulate the Noch brand plastic bottle static grass dispenser, as chronicled above. Not sure if that was worth doing or not yet... 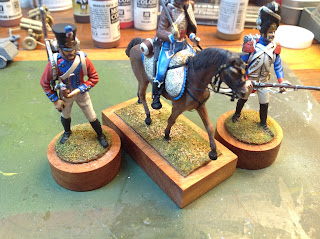 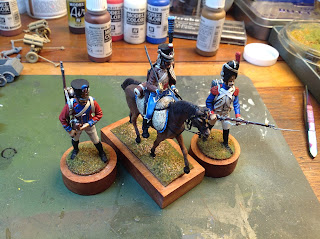 Anyway, as with much of this stuff, one can continue fussing and finagling without end. I got my 54mm (or 1/32) models to a point now that I consider more of less finished. As pictured above, I've removed the masking, and I'm pleased with the overall results. I made a conscious decision, partially motivated my laziness, perhaps? to keep the bases blocky and simple. I could've routed ornate profiles (probably would've gone with an ogee). But I thought the grain of the wood is beautiful, and by keeping them simple I could make more of that.


To conclude this 100th post, I return to more general thoughts.

What have I achieved with this blog? Well, sharing my work with the world at large is definitely a type of motivation, and it's great to get some feedback. I'd certainly like more followers and a lot more comments [2]. I hope that'll come as I continue. I reckon I need to get more into following other bloggers as well. I did more of that when I started blogging. Indeed, that's a large part of what got me started. As with YouTube, other people's blogs are a great resource/inspiration.

More generally, I've drifted away from my 6mm and 10mm Russia 1812 projects, and gotten more into 1/72 kit builds of late, and book reviews, which is all fine 'n' dandy in itself, but... I definitely do very much want to get back in the saddle in those areas. I'm also slowly getting better at finishing things off. It's certainly easier, I find, to finish hand painted stuff, as I still feel that I'm an airbrushing novice.

Military movies remain an interest, although finding decent ones is getting trickier, as I've now watched an awful lot of the better known more mainstream ones. Recent viewing has run the full gamut from the sublime to the ridiculous, 1864 being of the former, and The Battle for Warsaw the latter. It seems from viewer stats that my film reviews are of less interest to readers of the blog than other content. But as I'm really into it, I'll continue posting them.  I still need to work out how to code a dynamic hot-link 'picture wall' for the movies page.

Books remain a constant interest, with much reading and reviewing. Now that I'm getting stuff from Pen & Sword it's hard to keep up with these two activities and yet not get burned out. I try to hop around between types and titles, to prevent exhaustion. Sometimes things serendipitously connect, as when Philip Warner's excellent Anglo-centric D-Day book (my review here), from P&S, makes an excellent companion to Stephen Ambrose's much more American focussed D-Day, which I picked up in a charity shop for £1.50!

And the bookish and filmic stuff occasionally intersects, as when reading on the Bismarck (review here) and watching Sink The Bismarck. Or, whilst reading the above-mentioned D-Day books, watching the really rather excellent Ike, Countdown to D-Day, in which the rather unlikely casting of Tom Selleck as Ike actually comes off really well.

[1] This supplants my home-made pair of glass-less shelves. Models on those got very dusty. I found this shelving unit dumped on the roadside. It was a very lurid bright pink originally! So I stripped/sanded and painted it, and it'll serve me well. Though I do need more glass shelves and shelf support pegs.

[2] One thing I occasionally do with this in mind is post on TMP, The Miniatures Page, another source of inspiration and information. And I do find that does help drive a little more traffic to my blog. But nowhere near as much as I'd like!
Posted by Seb Palmer at 19:13