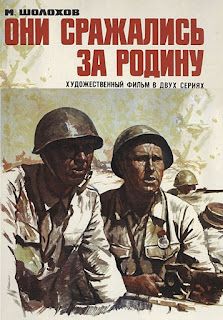 I became aware of this movie, starring and directed by Sergei Bondarchuk, of War And Peace and Waterloo fame, whilst researching a post on Road To Berlin. Folk at the Kinokultura website, a place specialising in modern Russian cinema, didn't like the latter, comparing it unfavourably with this. Hmm? Well, having watched both now, I still prefer Road To Berlin. Never take the experts at their word, I say. Always make your own mind up!

This said, it might simply be that the version I saw was fatally marred by certain things: firstly the subtitles were frequently very out of sync' with the film, and secondly, the soundtrack was appalling. It sounded as if it had been recorded entirely separately and in the studio, just as many dubbed films are. So, for example, the dubbed version of Stalingrad is, for me, unwatchable bad. Whilst the German OST transforms it into a masterpiece.

Is there a version of this with a good/better soundtrack? If so, I'd like to see it. As it is, the disembodied ultra-flat soundscape of this version completely kills the film. Or it does for me at least. There are numerous other issues however, such as a large proportion of the key cast being 40 or 50 year olds. There may have been some old folks in the Russian army. But this gives the impression they were the backbone of the Soviet forces! 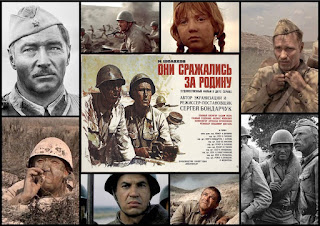 A rather nice montage, giving a flavour of the film.

And then there's the whole 'Russian Soul' thing [1]. On the one hand this is quite good, as it means much more dialogue and character based narrative than many a gung-ho action packed Hollywood style drama. And Hollywood this most definitely ain't. It's pure Russian/Kremlin. And in that latter remark I allude to a further problem, related to the leaden Russian Soul element, which is myth, or more properly in this context, propaganda.

The characterisations wobble between caricature and propaganda, only occasionally connecting with the intended humble reality of the ordinary fighting men this is clearly meant to be a homage/testimony to. This also leads to the Russians becoming like an army of philosopher saints, whilst the Germans are like Injuns in an old Western, automaton cannon fodder. From my reasonably wide reading on the Ostfront Russia was more profligate with their troops' lives than the Germans.


The action unfolds on the Don Front, which, if it's anything like it's depicted here, was a very dusty, sandy, rocky region, and takes place in 1942. The Russians are retreating, and the troops we follow are acting as a rearguard, whilst the main Russian armies retreat across the Don to regroup. The film is pretty epic in scale, something of a speciality with many Bondarchuk productions. Indeed, it's so big and long it's split into two films! 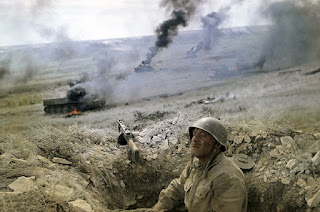 Towards the end of the first film Bondarchuk's character appears to die as the German's overwhelm the Russian line, in a very implausible scene. But no, he's rescued by a female child nurse, who drags him back to the lines. An interminable hospital scene comes over almost comically, as he raves endlessly on, in long indulgent hammy monologues. If I'd been the surgeon I've either sedated the windbag or cut an artery. Anything to shut him up!

It does have some good points, however. I do like films that take their time. And this certainly does. For a war film it's very slow paced, with more character based interaction than battle scenes. But there are battle scenes, and they're quite impressive in certain respects, such as sheer scale. Lots of planes are used, some apparently even bring crashed. And large numbers of T-34s or similar masquerade reasonably well as Pz IV type tanks.

Also the whole troops at march or in camp side of things is pretty well done, and you really get a sense of place. Indeed, the landscape is almost treated as a protagonist, as befits a film in which the country/nation/land is part of the title and subject. So, all in all? Something if a mixed bag, perhaps on account of the dubbed soundtrack. Not great, as is. But certainly worth watching. 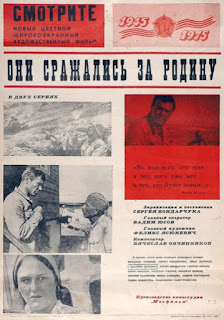 Looks like the film was part of a 30th Anniversary commemoration. 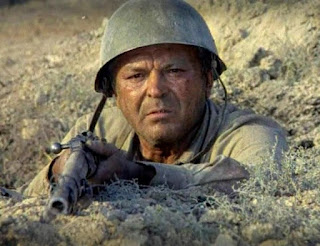 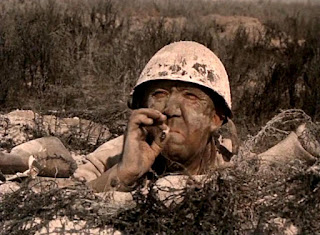 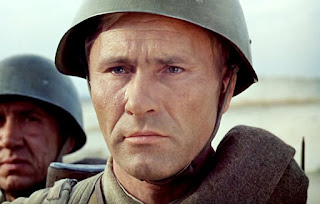 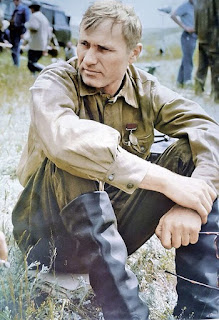