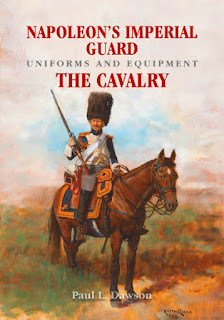 Initially I took the unusual step of scoring this twice, once for execution (two-and-a-half), and once for intent and all the rest; info/images, etc. (four-and-a-half). But in the end I've opted to combine the two into a single three and a-half bicornes score. And in some respects I think I'm being quite generous.

So, what's the good news? Well, as with the previous Infantry volume, this is a chunky, beautifully printed book, featuring lots of photos of garments and other accoutrements, contemporary or near contemporary artworks, and a small middle section of original paintings by Keith Rocco. The level of detail is quite something. I'm still not quite sure about the heavy use of tables of expenditures on cloth and the like. These occupy the main body of the text. I suspect they might've been less disruptive had they been collected in appendices. 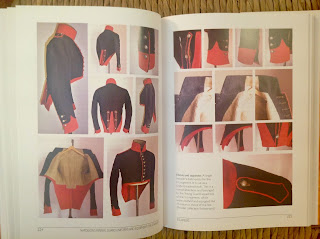 Fab' photos of a surviving kinski.

Already, even in the 'good news' segment I'm getting equivocal! But staying positive: Dawson aims to be, and is, as far as my limited knowledge goes, pretty comprehensive in the mounted bodies he covers, including units like the very short-lived Eclaireurs, the 'attached' Lancers of Berg, and even the mounted artillery and train. Once again, however, even this inclusiveness is tempered by the manner in which it's addressed, which is almost exclusively data-heavy.

For example, taking the Eclaireurs: the vast majority of what's presented here are either tables of expenditure on cloth, or brief 'histories' of individuals who served in the regiments. All this data is potentially fascinating, particularly to the hardcore Napoleonic junkie like me, but it doesn't make for an especially lively or engaging read. And the frequent 'it is clear from...' type statements are a bit opaque to a layman like me, for whom the bald data often isn't particularly enlightening, and is certainly not indicative of any obvious conclusions.

And finally, whilst some units are fairly copiously illustrated, both in terms of artefacts and illustrations, others, like the Eclaireurs, or even more so the Lithuanian Tartars, aren't. Re the Eclaireurs, reference to some contemporary prints is made, but said images aren't reproduced. And what few items are shown photographically aren't necessarily very representative (I'm referring here to the very fancy full dress dolman of Claude Testot-Ferry [1]). 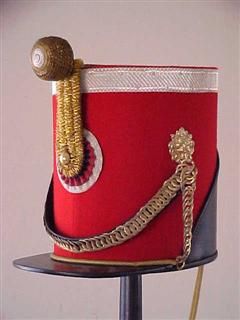 Mention is made of the Eclaireurs' Rouleau type shako, but it isn't illustrated. [2] 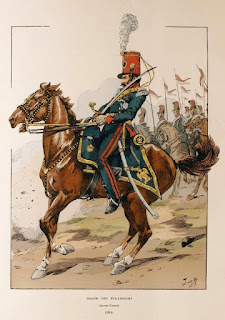 This Job print would've been a very useful inclusion. [3]

As you can see, even in examining this books good points, there are provisos. Now we move on to the problems. There are basically two: one is the data heavy nature of the content. As a book containing information, this really excels, drawing on some sources that are less often foregrounded in the literature. But therein lies the rub; here the bald data is front and centre. It doesn't support an exciting historical narrative, it's just a kind of 'data dump', splat, on the page.

The second issue is one I often find myself mentioning in this special-interest niche of ours, military history, and that's editing. The Infantry volume has some pretty shocking moments, as when the back jacket blurb announces that the book is about cavalry. But this Cavalry volume, whilst correct on the rear dust jacket, is littered with editorial gaffes that suggest it has never been proof-read. 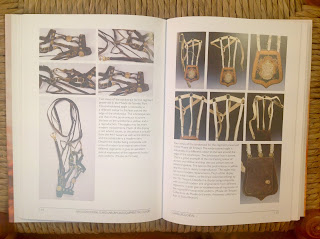 This jumble of misplaced captions is bad enough, but there's worse, as on pages 114-115 (shown above), where the left page shows photos of horse bridles/reins, and the right a sword belt and sabretache. But both bear identical captions describing a schabraque! This is, frankly, appalling and inexcusable in a book whose RRP is a hefty £40!

In conclusion, I would say that this potentially excellent book is currently very notably spoiled, partly by the dry data-heavy nature of the text itself, but much more so by the sloppy or seemingly non-existent editing [4]. Nevertheless, whilst pretty disappointed, particularly after the anticipation generated by the previous Infantry volume, I'm still very glad to have this. For all its faults, and they aren't insignificant, overall it's still both fascinating and informative.

[1] It's a thing of great beauty, but not as enlightening as to the ordinary uniforms of these units as is the kurtka style jacket that appears later.

[2] The photo I've used is a reproduction item. 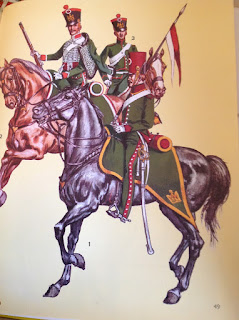 Guard Eclaireurs as illustrated by the Funckens.

[3] The Job picture doesn't appear in Dawson's book. Nor does the Martinet image he refers to in the text. Ever since I saw the image reproduced above, from one of the many L. & F. Funcken Arms & Uniforms titles,  I was fascinated by these cool looking cavalrymen. It's a great pity this book doesn't illustrate these guys better.

[4] Here's another and not altogether untypical instance of the need for better editing, p. 218: 'The eclaireurs of the Guard was a corps of cavalry eclaireurs of the French Imperial Guard...' Come on! Such redundant tautology shouldn't reach the printed page.

NB You may notice that I'm rather interested in the Eclaireurs! I was looking forward to learning more about them. And I did. But I was also deeply disappointed not to find better images of them.
Posted by Seb Palmer at 20:50