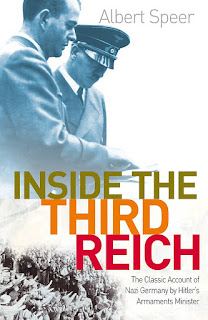 So, I'm just finishing reading this pretty hefty tome. Hitler is dead, and Speer has finally been arrested.

I'm enjoying this book a lot. Speer writes about his childhood and youth, and then his rapid rise under the wings of the Nazi Eagle, first as Hitler's chief architect, and later as his armaments minister. As a member of Hitler's entourage, and at times very much part of the Führer's inner circle, Speer has a very, er... 'privileged' view of the internal workings of this extraordinary court.

He's quite candid, both about himself and the panoply of courtiers seeking favour, advancement and reflected glory from their proximity to Adolf. Speer is articulate and eloquent, and his story is fascinating. Prior to reading this I'd mainly encountered him as a talking head in the magnificent ITV World At War documentary series. 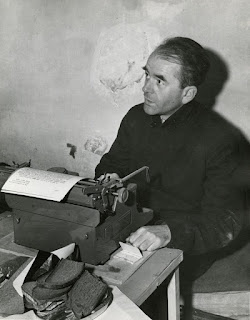 Speer at the typewriter in his Nuremberg prison cell.


Inevitably, written as this was during his incarceration in Spandau, after the Nuremberg trials, he reflects on his role and culpability in the whole Nazi program. And this has to include the holocaust. But he doesn't spend that much time on this subject, and tries to suggest he basically looked the other way.

Instead what he writes about chiefly are these four or five things: himself, Adolf Hitler, their work together and Speer's independently (-ish) as Hitler's architect, his struggles in the fragmented Nazi bureaucracy as chief overseer of the German armaments industry, and ultimately therefore their ability to wage war, and lastly but my no means least, the internecine strife within the febrile Nazi court. 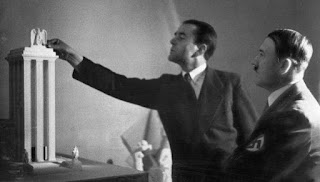 
At one point he notes with an obvious sense of regret that his architectural style, due to its huge grandiose bombastic style, in the service of a megalomaniac dictator who sought to overawe not only his enemies, but his own cronies, and even history for the following millennia, resulted in buildings that were inherently oppressive. So much for the Reich of 1,000 years, or even the 'theory of ruins'*, Hitler's architectural legacy - and Speer's even more so - was, for the most part, completely wiped away during and after the war.

Hitler could charm. Here Speer is clearly under the spell.


There are moments of pride in his accomplishments as a technocrat: Hitler and Speer were clearly 'size queens', so to speak, it was of great importance to them that Nazi buildings be bigger, preferably in every possible dimension, than anything comparable. Speer is always rattling off lists of cubic feet, or tonnes of this that or the other. He was also very proud of his columns of light effect (using air-raid lamp beams) as famously employed at Nazi Party rallies. And he isn't shy of his obvious pride in trying to make both German industry and the German war machine as efficient and effective as he could.


This last - and his constant struggle with fragmented, competing, overlapping hierarchies of power appear to be a chief component in Hitler's management style, and an integral and predictable element in both his own and his empire's downfall - is a major theme. One of the most amazing things is how spellbound he and Hitler's other acolytes were, and remained. To those of us far removed from the corridors of power certain things might seem crassly simple or obvious. But when mired in the matrix of very real and very intoxicating power, as these men were, it's clear that reality gives way to a hall of distorting mirrors, and Speer captures this element of his story very well. 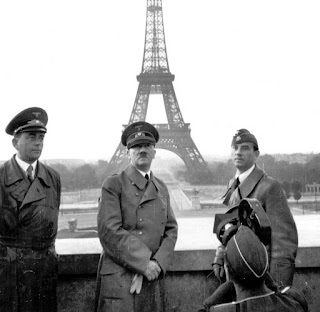 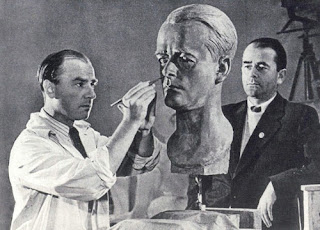 Breker sculpts Speer as the Mekon of WWII German artist-intellectuals.

Speer doesn't come across as a particularly bad person at all. Sometimes his own self-satisfaction is so blatant as to be embarrassing, and this makes the sculptural portrait of him by his friend Arno Breker, which is a good likeness, but gives him a Mekon-like bulbous cranium, suggestive, perhaps, of a high (self) regard centred around a sense of intellectual superiority. Like Hitler himself, Speer saw himself as an artist dragged into politics and administration, and to some extent martyring himself in a higher, nobler national cause


And it's  in relation to this that he finally, so he claims, began to separate himself from the mesmerising grip of his master, ultimately operatingly directly counter to Hitler's Gotterdammerung style scorched earth policies, and seeking to conserve industry and infrastructure for the postwar future of Germany.

All in all, a fascinating insight into a fascinating era. A compelling and enjoyable read. Highly recommended.
Posted by Seb Palmer at 13:55