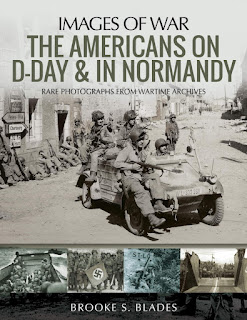 Another excellent title from the very useful Images of War series. The pictures are terrific, as one would hope they would/should be in a series with such a title. The text is pretty good. At first I wasn't too sure, re the latter, as in places it's very dense with unit numbers and movements. But overall the text is actually pretty good.

Blades treats the subject to a mixture of chronological and themed chapters, starting with preparations in England, and then moving via airborne troop drops to the beach landings. So far so chronological, but then comes a chapter titled Soldiers, Prisoners and Civilians. The action then moves further inland, before we're given chapters on the wounded, the dead, and the battlefields then and now.

There are some minor issues with the text, like references to characters (usually the photographers) by one single name, with no other contextualising info. And at times the density of unit/movement info can get near headache inducingly opaque. With so much to cover this could've been a mess. But it works pretty well overall. And the pictures are fab.

The best of these Images of War books are really great resources for wargamers, modellers and military history buffs when, as here, they're packed with great photos, accompanied by illuminating text. The pictures are admittedly all black and white - and the US was one of the few participants, alongside Germany - to make frequent use of colour film in WWII. But it's really nice, as well as useful, to have such rich visual material as this to hand in print form, as opposed to trawling the web for it.

I'd definitely recommend this to anyone with more than a passing interest in the U.S. role in D-Day and beyond.
Posted by Seb Palmer at 21:54