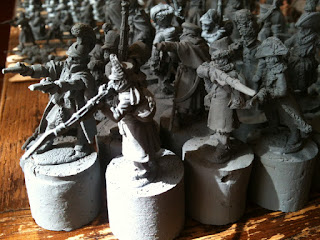 Nothing too specific in this post, just keeping myself motivated on the painting front, really.

I bought a can of matt grey undercoat paint, from a car parts shop in Ely, on a friend's recommendation. You get more coverage for your buck! I bought the can Saturday, it's Tuesday today, and I've emptied it already. 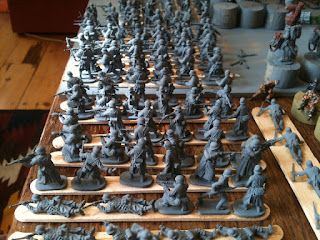 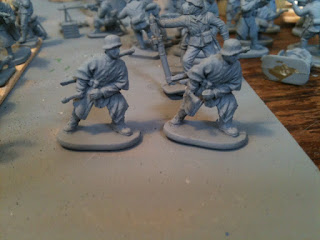 These fellows in zeltbahn needed their right hands adjusting, to look more natural/realistic: left as bought; right, after plastic surgery.

But then I have sprayed base-coats on quite a bit of stuff: about 150 1/72 plastic figures (not the hard plastic type either, but the 'toy' soft plastic sort!), from several different brands, inc. Airfix, Revell, and Caesar; then there are about 40 or 50 28mm Retreat From Russia figs, almost all of which are Perry (there's one figure, of Ney, in the famous musket-toting, long fur-lined-jacket wearing pose derived from that famous painting of him fighting with the rearguard... but I forget who the manufacturer is!?); and fourteen 28 hard plastic hussar mounts (Perrys again!). 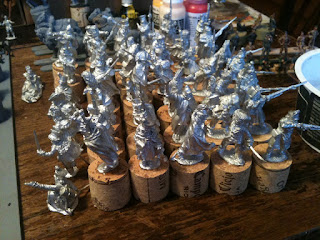 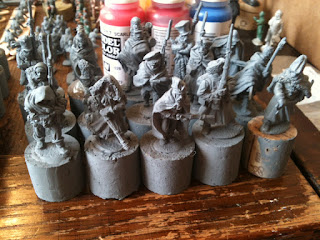 I love these figures! 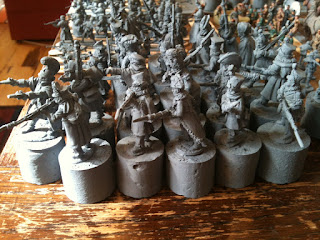 Can you spot the lone non-Perry fig?

The can also saw service on Saturday and Sunday, as well as today, covering a further 10 or so mounted 28mm figs, and around the same number on foot, both groups being Napoleon and staff.
There are also a few random extras, like some Salute figures from various years. And then there are all the ongoing 20mm WWII Germans, that I started during Half-Term. Oh, and the 10mm Russians, and the 28mm Front Rank drummers, and... 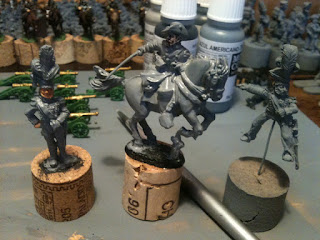 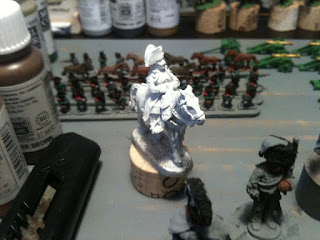 One of my several 28mm Napoleon's, this a one-piece casting, from Foundry. 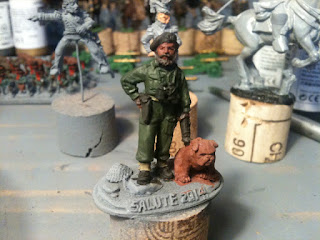 Well, it's all proceeding in a rather haphazard manner. That kind of bothers me on one level. I feel I ought to fix on one project, and see it through. But, thus far at any rate, I seem incapable of doing that. So, never mind, I'll just follow my whims for now!
Posted by Seb Palmer at 18:37