Film Review: The Bridge at Remagen, 1969 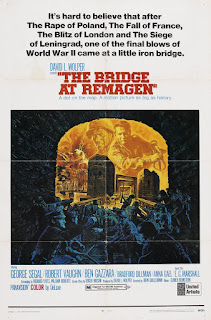 A nice old poster for the film.

After the disappointment of Anzio this film was a welcome dose of good old fashioned full on WWII action. Loosely based on real events [1], this film dramatises the American actions that secured passage of the Rhine into Germany.

George Segal plays tough war-weary Lieut. Hartman, who succeeds to command of his unit during events in the opening scene of the film. The movie follows Hartman and his unit as they spearhead the advance of the U.S. 9th armoured division, approaching the Rhine as the German defences collapse. 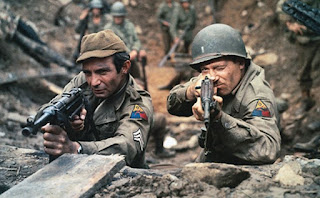 Gazzara and Vaughan are excellent in the two central U.S. forces roles. 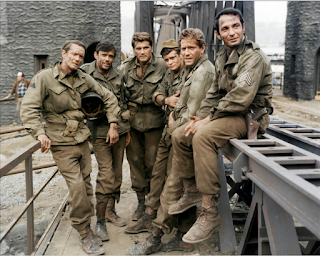 Core members of the cast take a break duty filming. 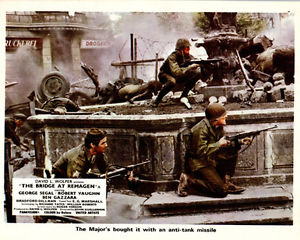 How a similar scene looks onscreen.

The strategic situation for the Germans was apalling, and Hitler was only making it worse with his no retreat/no surrender 'triumph of the will' pseudo-philosophy. Considering that around 75,000 German troops, the remnants of the 15th Army, were trapped in a pocket on the west of the Rhine, with the Beidge at Remagen as their only route of escape, it was a spectacular failure not to at least concentrate more of them in the bridges defence, never mind failing to get them back over the Rhine.

Robert 'Napoleon Solo' Vaughan is excellent as Major Krüger, a pretty sympathetic 'honourable foe' type German officer, given command of the bridge defences and demolition. En-route to his new command, whilst stopped at a checkpoint, he witnesses a fellow officer being executed by firing squad at the side of the road. His driver remarks shortly afterwards that surely the war is lost once you start killing your own military leaders in such a way. 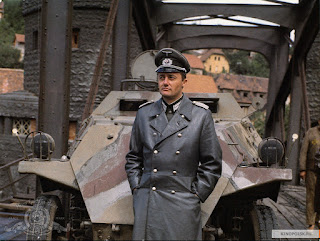 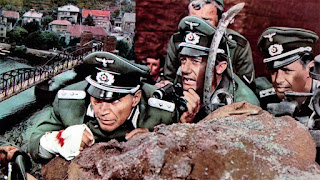 A nice retro looking tinted black and white still: either side of Vaughan are Hans Christian Blech, and Joachim Hansen, Krüger's immediate subordinates.

Hartman's troops have a very mixed experience as they near the Rhine, ranging from ambushes in peaceful looking countryside to the almost unopposed occupation of German towns. Initially they are tasked with helping destroy the bridge; ironically the Allies desire this, despite it being the last intact bridge over the Rhine, the trapping and destruction of the 15th Army bring an opportunity to good to lose. 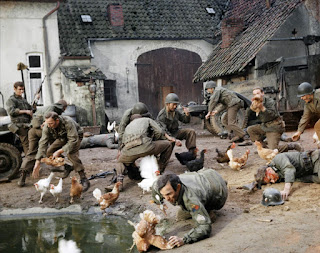 But these orders are contermanded, and Hartman's battle-fatigued and reduced unit is ordered to storm the bridge and take it intact, so the Allies can cross the Rhine and hopefully end the war quicker. The Germans, despite the late arrival of demolition materials, have set charges on the bridge, and the attacking Americans realise they're assaulting a potential death-trap. This scenario, based on the real events, makes for compelling viewing, and is very well realised here on film.

E.G. Marshall, as Gen. Shinner, decides to capture the bridge intact, if he can.

Both the Allied forces and the Germans bombed the bridge at various points.

U.S. armour pounds the German defences on the opposite bank.

I don't know exactly what these guns were, but they do at least look like 88mm.

Filling in the damaged approach to the bridge under fire.

Compared with the real events, the film-makers milk this situation for maximum drama, embroidering heavily on what actually happened. Personally I don't mind this at all. Intelligent viewers can enjoy an exciting movie and still discern truth from fiction by researching the real events if they're interested enough. 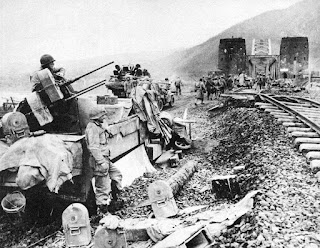 I try not to give too much away in my film reviews, for any readers who might not have seen the movie in question. I'll keep to that modus operandi here. Suffice it to say that this is all that a 'classic' WWII film should be: action-packed, well acted, well made, and with sufficient respect paid both to real events and all parties involved. It's a good 'un!

Much of the urban combat was filmed in Most, a town in Czechoslovakia that was being demolished and relocated to make room for a mining operation. This means that some wonderful genuine old-town architecture could be impressively blown to bits, and, thanks to this film, that act of developmental vandalism at least helped produce some spectacular footage.

An interesting footnote relates to the film's production; the Russians invaded Czechoslovakia whilst the film was being made, forcing the entire circus to flee westwards in a fleet of taxis! [2] 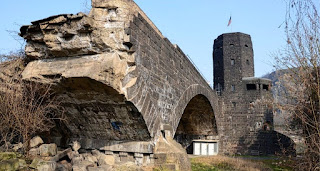 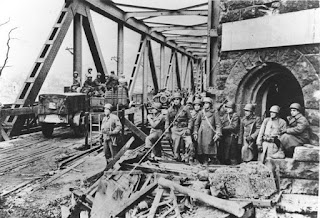 Allied forces crossing the Rhine on the Ludendorff bridge. 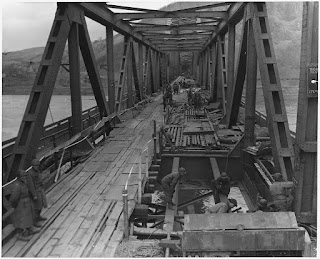 During the fighting the Germans did try and blow the bridge, causing quite a bit of damage, as seen here. 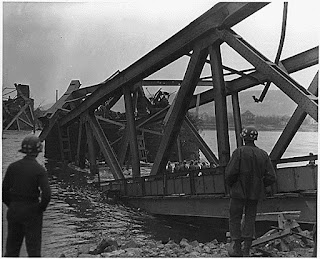 Ten days after capture the bridge collapsed, killing several and injuring many more. US army medics survey the carnage.

Gear nuts will also enjoy this movie, as the vehicles and weapons are, on the whole, much more authentic than in many war films. After recently seeing the opposite in the Desert Rats, it was nice to see German cars. Trucks, bikes and weapons such as MG34s, MP40s and even Panzerfaust. We see a Horch staff car, several motorbikes (they could all be the same one!?), which look like the BMW R61, Kubelwagens, and even an SdKfz half-track. Whilst we don't see Sherman's, the Americans were using tanks like the Pershing and Chaffee the end of the war, and most the U.S. materiél looks ok.

Ultimately both the actual events and this film version are compelling. I'll finish off this post with pics of the two real men upon whom Segal's and Gazzara's characters were, at least in part, based, Karl Timmerman, and Alexander Drabik. The former died of testicular cancer around the time of the Korean War, whilst the latter lived to a ripe old age. The fate of some of the senior Germans was somewhat bleaker! 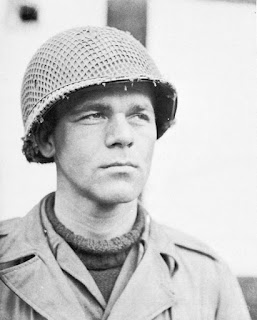 Karl Timmerman, who, as his name suggests, was of German ancestry! 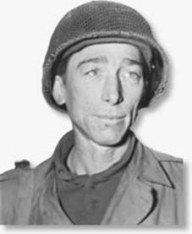 Alexander Drabek, the first U.S. soldier across the Rhine.

Drabek gets a medal for his part in capturing the bridge at Remagen.

[1] The Wikipedia entry on the historical battle (Battle of Remagen) is worth a read.

[2] Vaughan portrayed himself in a BBC R4 dramatisation of these events, circa 2007. Sadly I can't find a live link to this online.

There's an interesting article about German survivors of these events here