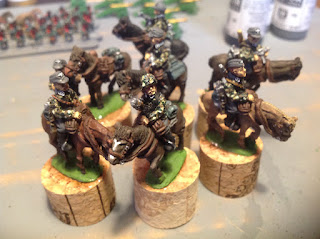 Pictured above are the nearly completed miniatures. But let's go back a few days first... 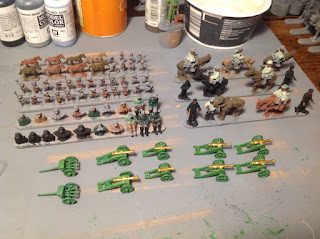 I was working on a whole load of stuff... 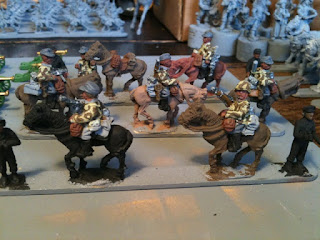 ... and I decided to single out the SS cavalry.

I bought these seven Britannia Miniatures SS cavalry figures at the most recent Partizan. I really like the idea of fielding a small number of cavalry in my 1/72 WWII German army. And I love these figures. I've only got seven - I'd have liked eight, but they didn't have the panzerschrek toting fellow I wanted as #8 (he'll be a future reinforcement I think) - but that's fine. I don't want too many.

Over the recently finished half-term (damn, that went quick!) I prepped a fairly large quantity of figures, mostly in 10mm Russian Nap, 1/72 (plus a few 1/76) German WWII, and a bunch of 28mm Napoleonics (mostly Foundry Napoleon & staff sets, on foot and mounted, and sundry other oddments, inc. a small collection of Front Line French Nap drummers!). Some if which can be seen in the second  pic, near the top of this post. 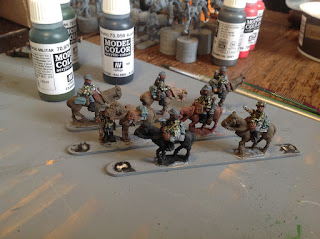 I got rid of the tank commander figures on these lolly sticks; they were getting in the way. 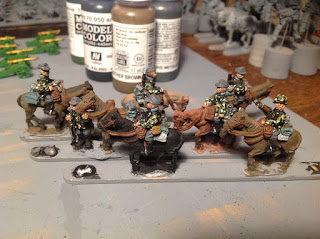 Starting on the camo'.

Once I'd got a battalion of 10mm Russian Nap Gren done, I decided to turn to these guys, whilst also doing a little on some other stuff. And today I did very little besides work on these dudes.Having stopped for the day, they're well on their way. It's really just the horses that need attention now. There's still some shading/highlighting and detail to do as well. But I feel the end is in sight.

I think I'll base these guys individually. I envisage my WWII troops being made use of in smaller skirmish type scenarios. The larger figure size - and esp. if armour is also involved - means I'll have to be clever with space! 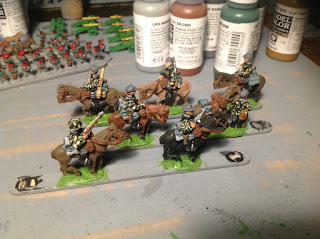 A fair way off being finished, but starting to look ok, I hope!?

UPDATE: Work intervened, and progress slackened, but yesterday I did a bit more. I transferred the figures to individual wine-cork 'plinths', as handling groups of them on lolly-sticks meant I kept rubbing paint off exposed areas. 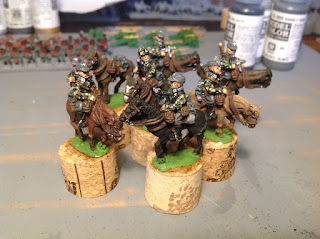 I've been constantly touching up and re-touching areas, and have added some detail to collars and caps. Overall I'm quite pleased. But I've learned from experience that acrylic on acrylic washes aren't that efficient, so I'll be gloss-varnishing these today, and then trying my first oil paint washes since returning to the hobby. 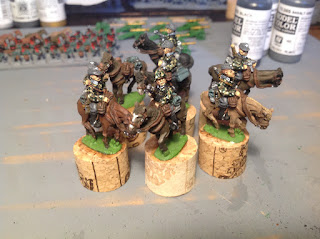 When I left off, donkeys years ago, one of my final units were some 15mm Eclaireurs, of the French Imperial Guard, and I recall that they were almost as much painted in artists oils as Humbrol enamels, a process I'd been evolving toward over a period of years. It'll be interesting to try again, now I'm older and perhaps (I hope!?) a little wiser!