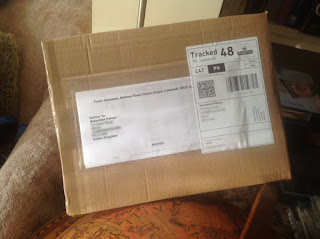 I'd wanted to title this post 'The Postman Always Sometimes Rings Twice', but I couldn't find a way to get the crossed out text in the title of my post. Hey-ho, never mind. Sooo... 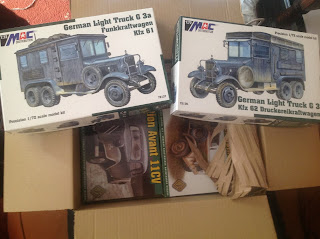 A couple of days ago I ordered a few models from Hannants, all German WWII, all 1/72, and all of which, I guess, come under the soft-skin/rear-echelon banner: three trucks and a car. These arrived, very well-packaged, this morning. 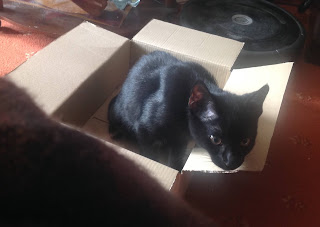 
Chester, our new* and still very young kitten, was almost as excited about this as me. Only, rather like Eeyore, in that touching Winnie the Pooh tale, where he gets a burst ballon and an empty honey pot, Chester was more interested in the empty honey pot than the contents!

* Tigger, our super-fluffy moggins, and occasional star of a post or two online, perhaps even on here, alas, passed away earlier this year. 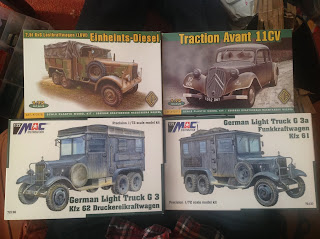 Whilst I won't be starting in on any of these new arrivals today, I will be continuing to work in detailing my 88s. I refined some of the parts today, sanding, filing, paring back, shaping, etc. I've also constructed a form for my first resin-casting silicone mould. Today I'm planning to pour the first half of said mould.

Yesterday I used a hot glue gun for the first time, which was interesting. I think the big bag of glue-sticks I have are poss' meant for a different glue gun, as they seem too thin, and don't feed through the gun properly when I pull the trigger... which is annoying! 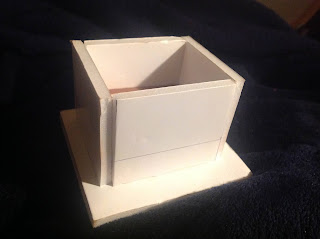 I bought some foam card from a shop in Peterborough. 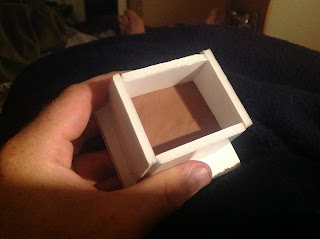 And mixed some plasticene, to set the parts into. 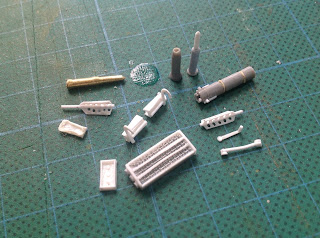 In the above photograph, the three items in the upper left are rejects: a malformed brass shell, ditto the crappy wobbly-holed erdpfahl, and an ammo box lid that melted into a near shapeless blob. The other bits have been improved, and, bar the wicker ammo box and lid - which need a little more detailing - are ready for moulding.

Ready for moulding? Hmmm... infamous last words. It's now several hours later, and I'm hardly much further on. I used a technique of mixing Milliput with water until it's so dilute you can paint with it. I then loaded the wire 'wicker' several times. The idea being that whereas before it was full of air, in the voids or interstices between wires, it should now still have the woven texture, but hopefully won't trap any silicone, when I pour the mould. 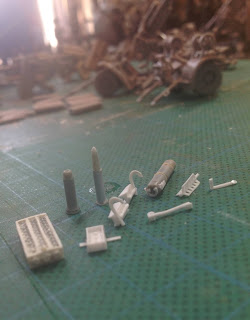 I also decided, on referring to images of real 88mm ammo, that my live shell needed reworking. That was super-fiddly and took ages. I think I need a mini-lathe of some description, so I can make parts like this more easily. My original version took the Hasegawa ammo as it's starting point, which is much more 'stepped' than the real thing. A strap and buckle on the lid and wicker ammo box completes my pre-moulding prep.

I'm having a break now, and thinking about how on earth I'm going to embed and lay out these tiny ultra-delicate parts. Even though I'm getting next to nothing done, it's quite intense work! I feel drained... 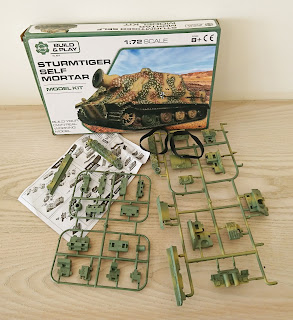 And to finish this miscellany type post, the above image shows a strange looking little kit from a range of 1/72 kits I'm intrigued to try out. These kits are currently available very cheap at the Tank Museum's online shop (click here to have a look). It was whilst watching one of curator Davis Willey's back garden based Q&As that I was reminded of these oddities - I'd encountered them before online - as he had one on his table, amidst sundry stuff he's trying to help the museum shop flog.
Posted by Seb Palmer at 17:23