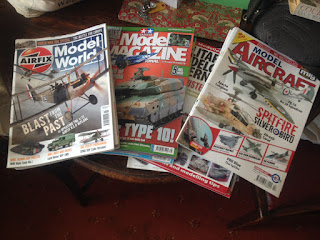 Recently picked this lot up, free. 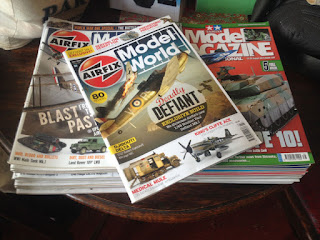 Approx' 40 mags, of which half are Airfix Model World.
I do love Freecycle. I'm a member of two local groups; one for Cambridge, and the other Fenland. The former is very active, the latter a lot less so. Nonetheless, I just picked up a load of modelling magazines - 40-ish, mostly Airfix Model World and Tamiya Model Mag' International - from someone on the Fenland group.
I'm not sure how many of these I'll keep (nor what I'll do with any I don't keep). But a cursory flick through all of the non-Tamiya titles has revealed numerous articles of interest, sometimes directly - a 1/35 Maultier Ambulance build will aid my 1/72 Opel Ambulance, re interior detailing - and sometimes simply in broader technique terms, as for example general painting/weathering methods, and suchlike. 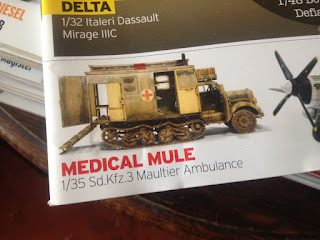 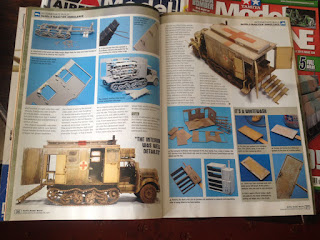 ... with the interior of my Opel Blitz Ambulance. 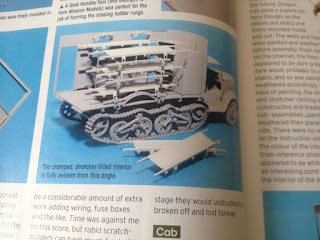 Some really helpful visual ref'.
The Tamiya titles, only one of which I've glanced through thus far, seem less likely to be of direct use, as my main scale is 1/72. That said, I do have a few 1/35 kits, including some Tamiya stuff - an 88mm, for example! - so I'll look through them all at some point soon as well. There are also a few aircraft themed titles. Again, of less interest to me, as I'm mostly a land warfare modeller. But that said, I have amassed a pretty large stash of 1/72 WWII German aircraft, and even a few items outside that favoured niche area/scale.
Having thumbed though a good three-quarters of these mags already, one thing very apparent to me is the bewildering array - mind-numbing, perhaps? - of material on offer. The kits themselves, and the humongous amount of ancillary stuff, from the paints and modelling equipment to aftermarket detailing stuff, and decals, to all the reference resources, books, museums, shows, etc. It's amazing! 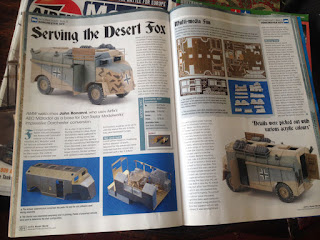 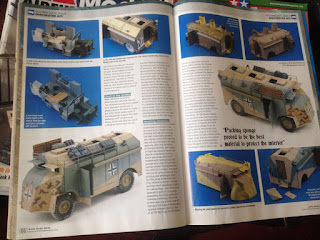 ... a captured British armoured staff car/mobile office.
Another thing that constantly astounds and sometimes even bemuses me is the degree of obsessional interest in detail. Very few of the featured builds in these magazines are simple straight out of the box affairs. Most of mine, by contrast, start that way. Adding detail and modifying kits is something I do do, of course. And I'd say it's one of the aspects of this hobby that's potentially the most fun. But it's also an area where the 'anorak'-ish aspect of the hobby can sometimes make me feel ill at ease, most especially at shows or club events where it can become an unattractive form of point-scoring display (rivet counting, I've heard it called).
Having said this, the upside of this obsessional aspect of the way so many of us engage in these hobbies is the abundance of information, which grows continuously, both in print, online, and elsewhere. In case anyone hadn't noticed I've been getting into WWII German 88mm Flak guns recently, and what started as simple out of the box pleasure is evolving into obsessive researching and a desire for a bigger collection of models of this interesting weapon.
Posted by Seb Palmer at 18:49