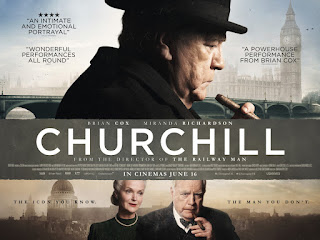 A friend loaned us this DVD (thanks Pat!), which we watched this evening. About 15 minutes into it I was perplexed. About 30 minutes in I was annoyed. By the end, I was mostly just bemused. The first thing was that we both - Teresa (my wife) and I - remarked how much better Gary Oldman was in Darkest Hour, (a much better film).

I also found myself comparing it with Ike, in which Tom Selleck portrays Eisenhower over the same period - the days running up to D-Day - a film that shares some commonalities in terms of scale of production. Both films were, in Hollywood terms, low-budget affairs. But whereas Selleck's movie, if not entirely devoid of factual mistakes, gets the basic tenor spot on, Churchill is a bizarre ahistorical travesty.

Historian and Churchill biographer Andrew Roberts makes a number of acerbic observations in a review of the film entitled Fake History in Churchill, starring Brian Cox, describing the latter's portrayal as "a depiction that Dr. Goebbels would have been delighted with"! Roberts lays the blame squarely at the feet of Alex von Tunzelmann, who wrote the script/screenplay.

With rather staggering irony, von Tunzelmann authored a column for the Guardian for a period, Reel History, whose subject is the relationship cinema has with historical truth! One has to wonder how and why someone who regularly dissects films to see how accurate they are could then go and commit such blatant calumny. Especially at a time - the 70th anniversary of the war's end - when both the man and the times and events depicted were being celebrated and remembered.

Brian Cox is a decent actor, and he plays his role with, er... well, if not gusto, then something similar. But the Churchill we see here is petulant, contrarian and ill-informed. The issue for me isn't really about how this portrayal undermines the celebrated image of Churchill, which it certainly does. It's about the implausibility of so many moments, from the more personal and mundane level, like his secretaries' emotional outburst over her spouse, to grand strategy; the idea that Monty only let Churchill in on his plans for D-Day the day before the invasion is utterly preposterous.

We did watch the film all the way through; the acting and production made it watchable. But I did find it beyond the pale, in terms of attempting to pass itself off as an exposé of the 'man behind the myth' (a tag-line for the movie was "the icon you know, the man you don't"). In the parlance of our times this might be described as a historical 'reboot'. But that would play down what is, frankly, a shockingly poor, slanderous even, rendering of history.

By all means watch it. But be sure to check it against real history.