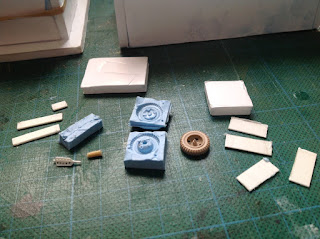 Two extra last-minute moulds...
The above photo shows my first two silicone moulds to be, er... de-moulded? Is that the right term? At left is my first attempt at an 88mm erdpfahl, or stake. That mould is one-piece, with a slit cut along it longitudinally, on top. In the centre is a repro of a German truck wheel. That is a two-piece mould, but made by cutting a one piece silicone mould in two laterally, around the circumference.
Both of these are purely experimental tests, not for 'production'. The erdpfahl, 'cause it's too crappy, and the wheel, because it's a copy of a commercially available model piece. Anything that I might plan to reproduce for actual use will have to be original, so as to not infringe on copyrights. But in terms of testing out the mould-making process, it's helpful to try out a complex shape with fine detail. In addition, both pieces, the erdpfahl and the wheel, have holes that pass though the whole piece. And I wanted to see how moulding and casting such things worked out in practice.
These two moulds were actually afterthoughts, made with leftover silicone - which had already been left an hour or more - from pouring the two larger moulds I'm making. I really wasnt sure if the silicone was too far gone already. But they appear to be usable, from a brief visual inspection. These moulds have been opened up after about 8-10 hours curing time. I'm going to leave the other larger moulds for the full 24 hours (the product recommends between 8-24 hours). 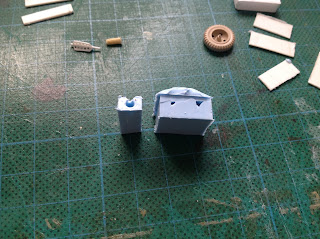 Tiny ill-formed moulds, made with leftover silicone.
I'm putting this post together without access to my iPhone - battery dead/charging, elsewhere! - on which I have most of the photos of all this process. So I might return to and amend this post, to show more of what I did. But here's a brief summary: The erdpfahl stake is scratch-built from styrene, the wheel comes from a kit, they're both 1/72. I used foam card and plastic (styrene) card to make forms, or enclosures, to hold the silicone. And on these two instances, I rather messily slopped the partially cured silicone into one side of a rectangular or near square form. I then placed this on a small foam card substrate, popped the piece I'm moulding into the silicone, and then plonked more of the blue goop on top.
The silicone and resin moulding and casting set came with wooden spatulas, like oversized lollipop sticks. I used these to press the silicone and mummified parts into the form. These were then left overnight to cure, and freed from their forms this morning. The moulds needed tidying up a fair bit, as I'd made them in a very messy ad hoc way... the were after all afterthoughts/experiments. And finally I had to to cut into the silicone moulds in order to retrieve the cast objects. One cut along the top of the mould, from the pouring sprue/vent, for the stake, which I popped out by deforming the mould, and an all round lateral circular cut for the wheel (I'll also need to cut a pouring and possibly also an air-release vent for the latter).
I also had to do some fiddly cutting inside the moulds to release both pieces, on account of the through-holes they both feature. After all this stretching and butchery, will these moulds produce usable castings? I'll have to have a try, and see. In the meantime, I'll try and add more pics from my phone, once that's back to life, and exercise patience re the larger pair of moulds.
Posted by Seb Palmer at 12:55