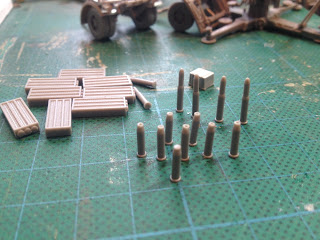 Ammo from the Hasegawa 88s I previously built.*
* The observant might notice I've drilled out the ends of the spent shells.
Things have gotten a bit asynchronous, if that's a word? What with techy issues plaguing me, from Apple iStuff that holds charge for 2 seconds to Blogger updates that pout the kibosh on the workflow, things aren't as smooth as they might be.
Anyway, the result is that this post ought to precede the last one, but I can't be arsed, faffing about any more than I already have. So here it is. These pics and the accompanying text document the run-up to the previous post, where I poured my first few silicone moulds... 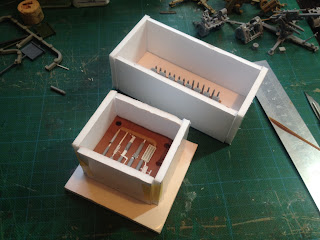 My two main mould forms, ready for the first pour. 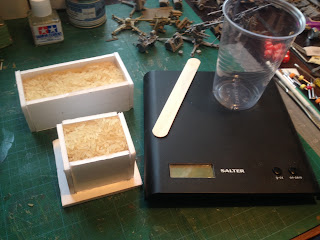 I used rice to calculate the approx' volume of silicone I'd need. 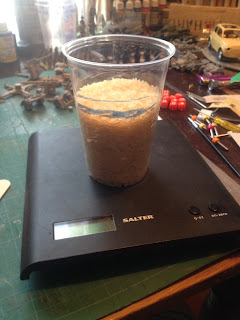 Not using the scales yet, but I've marked two lines...*
* The thicker lower line is actual volume required; the thinner higher line allows for a little extra, just to be safe.
As can be seen, I built forms using foam-card and, for the two-part mould for all the scratch-built 88mm gubbins, embedded the parts in plasticene, with the added channels for vents/sprues. The ammo is purely for an experimental test moulding: can I reproduce stuff in a one-piece mould and get it all out on long single beam style 'sprues'? The 88mm bits, on the other hand, I'm intending to produce in small quantities, to detail my models. 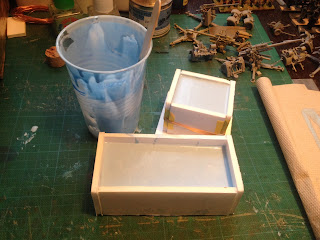 I mixed the silicone in a disposable cup, and... gulp, poured it. 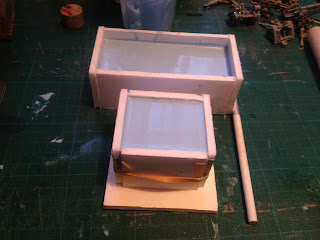 About two hours later, it looked like this... i.e. much the same!
I spent a fair bit of time after pouring the silicone tapping the forms, and popping air bubbles as they rose to the surface. This was kind of satisfying in the same way that dealing with blackhead can be (overshare?). I now had to wait, between 8 and 24 hours, to de-mould. I'd then be ready to pour a test batch of the ammo. But the 88mm bits and bats would need the second half of the mould pouring first.
Posted by Seb Palmer at 16:06