Misc: The Saga Slows Down... 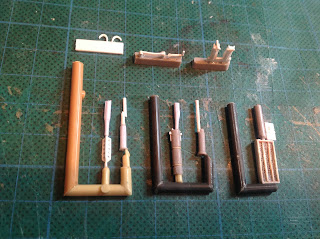 Newly arranged sub groupings start to take shape.
Ok, so here I am, on Tuesday, having separated all the 88mm stuff into four groups last night. And made three sprues up. I've endeavoured to make the casting and venting pipes, the ingress of resin and the air egress, bigger. Hopefully on my next casting session, the resin will reach all the nooks and crannies. 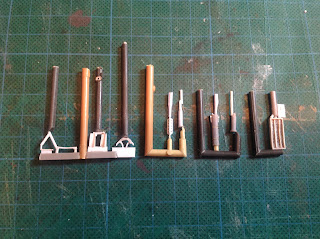 All four sub-groups, on their own sprues; larger casting and venting 'pipes'.
With all four groups 'sprued up', it was time to make the silicone pouring forms. I took a tip from some of the online videos I've seen, and made the foam-card forms two-part. As a one-part arrangement, previously, it was very tricky trying to work in such a tiny confined space. This method allows one to work on the bottom half first, embedding your objects and levelling your plasticene, etc. And then you put the top part on to pour the first silicone part of the mould. 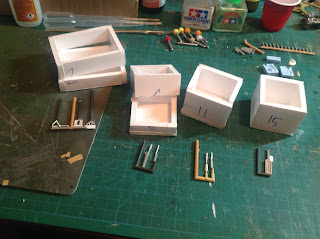 Working on creating two-part forms for moulding.
The final pic, below, shows all the lower halves, filled with plasticene, awaiting the trimming of the casting and venting sprues and the embedding of the parts. I did this around lunchtime today. And I'll probably come back and add to this post later, once I've got the objects embedded, and the other halves of the forms in place. 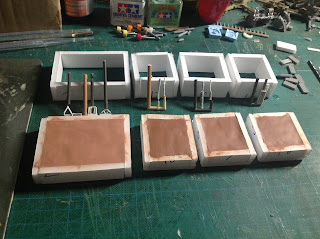 At that point, it'll be time to add mould release - I'll add more, and be more scrupulous about it - and mix and pour another batch of silicone. I desperately hope that this time I succeed! 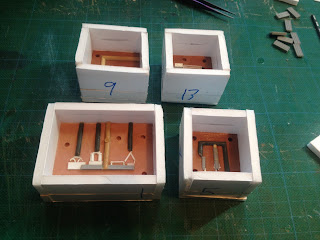 Lubed up, forms built... ready for the pouring.
Some considerable time later the same day: I lubed the moulds with vaseline - and not mould release (that's for the second silicone pour, and not for using on the plasticene... I discovered!) - super-glued the top parts of the forms in place, and poured part one of each two-part mould. Those two steps looking as illustrated in the two pics, just above and below. 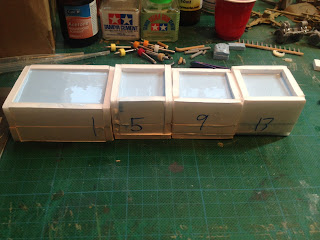 And there they are. Now comes the waiting...
I guess-timated the quantity of silicone I'd need, at half as much as I'd used on my previous attempt. And, somewhat miraculously, that proved to the perfect amount... phew!!!
Posted by Seb Palmer at 14:01