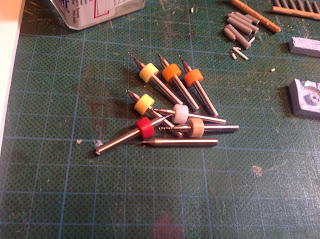 Casualties of war... a load of busted micro-drills.

My first moulding and casting experiment has been pretty disastrous. The casts were, with one iffy-ish exception - ironically the duff old erdpfahl (see two pics down from here) - appalling. I think this was caused by several factors. The chief one being crap mould design. I tried to pack too much into one mould, and I didnt go about the mould design and construction carefully or cleverly enough. 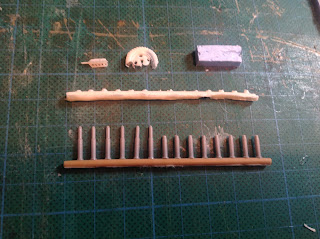 Sadly this means my two bigger moulds are most likely costly junk. Certainly the ammo mould doesn't work, as witness the above picture; contrast the part to be cast, bottom, with the casting itself, above/middle. I've yet to try casting the multi-part 88mm gubbins mould. But the second half of that cured in such a way that prising them apart was all but impossible, despite my use of the mould-release liquid that came in the casting set. So the mould is likely to be both damaged, as well as being crap to start with! I will cast with it, at some point. But I don't have high hopes for the results. 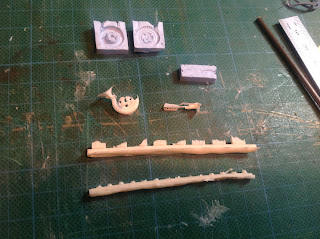 All the bits I cast: only the erdpfahl is tolerably ok.

One thing to come out of all this is a substantial re-design of the 88mm sundries, as can be seen in my next post. I've unpacked all the various bits, and wound up with four sub-groups. I've also taken more care with the forms, adding bigger and more plentiful pouring and venting openings. I'm hoping with better care and diligence this next time, I can get better results.