It's a while since I made this initial post. When I made it, it had no content whatsoever, just the appended comments. They were the only content I could add from either my iPhone or iPad. Things haven't changed, and it's definitely heftily impacted the ease with which I can post. Most annoying!
The skull and crossbones image was a later addition, done on my desktop iMac, the only device of mine on which I can now continue posting to my blogs. Below is a screenshot taken at the time of the original failure to post. I think taken on my iPad? 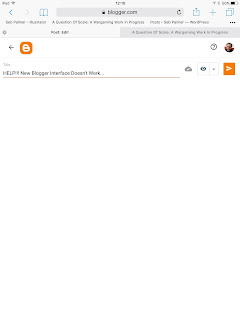 Ah, the joys of blogging...
I was able to add/edit a title... but there were nowt doin' in the big blank space below. And so it remains. I'm having all kinds of other issues relating to the whole 'Apple wants to run your entire life' situation, which includes their desire to dictate what gear you have and, even more insidious, how you use it. Anyway, the upshot is that I'll have to cave in, sooner or later, and update my Apple tech. Or... and oh boy am I tempted, bin the whole oh-so precious Mac mallarkey and enter new pastures.
My only issue with this latter idea is, that, like modern TV - so many channels, so little worth watching on - we live in times of, perhaps (and then again perhaps actually not) more choices than ever. But it does kind of depend what the choices are. So there may be more. But they might all be more or less the same, and all equally good/crap.
This is certainly true of things like tech services and utilities. Yes, there's lots of choice. Too much,  in fact, inducing what I call 'consumer blackout. But all the choices are essentially almost imperceptibly different shades of the same shitty packages: overpriced, with execrable so-called 'customer service' (customer contempt, more like), and giving you only options that suit the seller or provider, noit the user or consumer.
Posted by Seb Palmer at 12:10