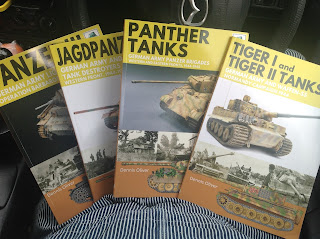 In this post I'm looking at a batch of four Pen & Sword Tank Craft titles, all on WWII German armour, and all by Dennis Oliver. I've reviewed numerous other titles by Oliver here before, and I've grown to really enjoy them. Indeed, to love them. Textually they can be a little heavy going; not due to poor writing, thankfully [1], but simply because there's just so much factual detail. If you're a proper Panzer Nut, however, you soon get a taste for that.

Obviously these are aimed at modellers, so the 'camouflage and markings' sections, what used to be termed the 'colour plates', are a particular attraction. And in the Dennis Oliver titles the illustrations - for which I can find no credits, which is a pity - are of an excellent quality [2]. The model showcase sections also give the reader ideas and inspiration, re what can be done. A minor quibble here, and I've said this before, is that 1/35 dominates. I'd like to see a greater variety of scales represented, including the 1/76 and most especially 1/72 that are my favoured scales. Panther 222, or the Overloon Panther, featured in Tank Craft 24.

Oliver has a particular m.o. which means frequently his titles follow or share a series of familiar paths, in terms of structure adopted and info given. This said, there are exceptions, the Panther Tanks book in this batch being a particularly good example, in that - apart from the ever present parts (colour plates, model showcase, modelling products, etc.) - it's mostly structured around the consecutive generations of brigades.

Several of the recurring features that give Oliver's contributions to this series their particular flavour, and which you'll find in some of these titles, are such things as timelines, unit histories, schematic diagrams illustrating unit composition, and more generally a sense of thoroughness and detail that is equal parts awe-inspiring and intimidating, to the more laid back buff such as me. But as I said above, the more I study this stuff, the more I too become addicted to the detail of it all. 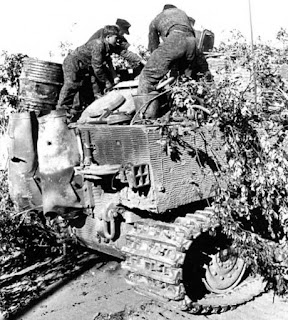 A different but very similar picture to this graces p. 57 of the Tiger book. 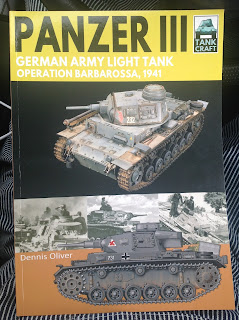 Focussing on the Pz III, a key piece of the German armoured thrust into Mother Russia, this excellent addition to this ever-growing series is chock-full of great reference material for the modeller.

It's kind of ironic that in the Tank Craft series as a whole there are already, so far, three titles on the Tigers I and II, and only one apiece on the Panzers III and IV. In truth the latter far outnumbered the former. But popular interest has generally favoured the later and larger tanks, and the coverage in this series, so far, conspicuously confirms that. 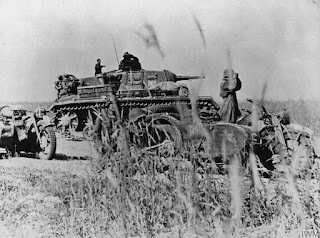 This very evocative photo appears, albeit small and cropped.

Many of Oliver's trademark features are here: timelines, unit compositions with diagrams, unit histories, and info on technical details and modifications. Then there are the showcase, model products, and colour profiles. Re the latter, these are of the usual high standard found in Oliver's titles. But as they're almost all in the earlier war German dark grey, they might not be the most exciting.

Not a tank that generates the same buzz as the 'big cats', the Panzer III is still an interesting weapon/vehicle. It'd have been nice to see a few more and perhaps more interesting period photos. And similarly, it's a bit of a shame that all the showcase models, as impressive as they may be, are 1/35, except a lone 1/48 example. Surely rather than having four 1/35 models, they could've had at least one in 1/72?

An excellent and highly useful book, but not quite as good as the other three under review here. 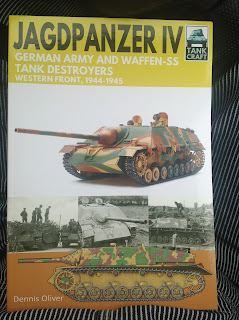 I only have one JagdPanzer IV in my German WWII arsenal, at present. Thanks to this book I now know that mine is a IV/70(V), as opposed to a IV/70(A). In all honesty I hadn't realised there were two such similar yet different looking variants. I definitely prefer the lower-profiled A type. And this book has given me a fabulous example - well, numerous, actually - of camouflage and markings to use as a basis for finally painting and finishing a tank model that I built aeons ago. 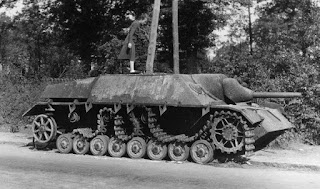 Another view of this vehicle appears on p. 59.

I don't quite know exactly why, but I love this vehicle, and I love this book. Maybe in part it's because it's a great example of how the German war machine of WWII took a tank that'd become obsolete in its original role, and successfully repurposed it? I like the Pz IV, and it's kind of nice [3] that instead of binning it, it got a new lease of life [4] as a tank destroyer. But I think it's simpler than that: it just looks so damn cool! As a friend of mine (not a modeller) likes to joke; the Germans may have lost WWII morally and militarily, but aesthetically? No question, they won. 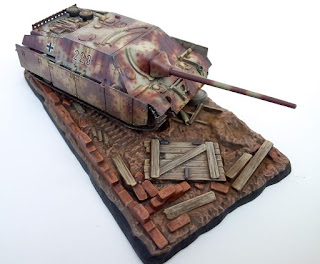 I also love that this book features a smaller scale model in the showcase section. And not only is it smaller - it's a Matchbox 1/76 kit - but it's also simply built 'out of the box'. None of your intimidatingly good/unaffordably expensive 1/35 trickery or wizardry, with after-market parts, conversions, and whatnot. Anyway, a great book. Love it. Highly recommended. 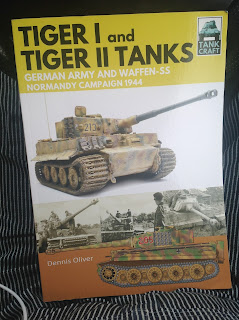 Another quality instalment in this growing library of highly useful publications. This one I love not just for all the usual excellent info and illuminating imagery, but for featuring not just one, but two 1/72 models, in the showcase section. Bravo! There's also a 1/48 example as well. Amongst many other things, one inspiration this particular volume has determined me on is adding more zimmerit to my Tiger models, both the Is and IIs. 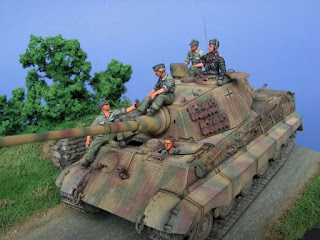 One of the themes developed in the text is very interesting, re the small number of Tigers vs their perceived advantage/threat. The Germans making much of what really was, as a percentage of their materiel, a little, and the Allies fearing that behind every bocage hedge a dreaded Tiger lay in wait, ready to pounce. Taken alone or in conjunction with Oliver's other Tiger titles in this series, this is a very useful book. One I'm very chuffed to have. 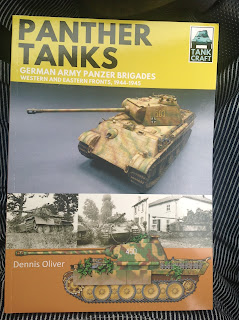 Initially when I read these books, I'll actually be surfing through the images, and only actually reading some of the picture captions. The text itself, being so densely packed with info', is something I generally get into later. But I feel it's worth noting that Dennis Oliver's contributions to this highly useful and ever-growing series are of a uniformly high, nay, superb quality, in all areas.

The level of detail is on the cusp of mind-numbing. But, if you're anything like me, you'll find yourself strangely excited by all the minutiae. And as its mercifully well-written, as hard work as it might be to digest (never mind retain) such a great deal of info', it is at least pleasingly clear and concise. 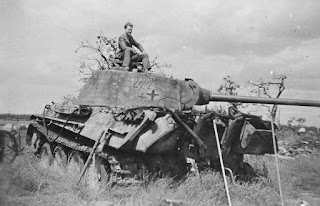 In this instance Oliver gives over the bulk of his text to brief histories of the numerous Panzer 'Brigades' equipped with Panthers, noting that in the latter half of WWII Germany excelled at this kind of near ad hoc firefighting type m.o. Then there's all the usual stuff: colour profiles, model showcase and products, etc. In conjunction with the other Panther titles in the series this all adds up to some seriously useful stuff.

The colour profiles are terrific, as ever. And the quality of the showcase models is jaw-dropping. But there are only three, all 1/35. I'm docking half a star on account of this, as it'd have been nice to have had one or two more showcase examples, preferably in other scales.

In conclusion, all of these books are excellent, and well worth having. And I look forward to more useful titles as the series continues to grow.

[1] I won't mention names, but I have struggled with some P&S modeller's titles where the writing itself has left rather a lot to be desired.

[2] As good as the illustrations are. And I love them. I do have one quibble: the dunkelgelb and rotbraun seem fine to me. But the Olivgrun seems a little odd, perhaps a bit too lime-ish? Kind of too zingy, for my tastes. But the images are so good overall this isn't a deal-breaker at all.

[3] Hardly an appropriate term, I know.