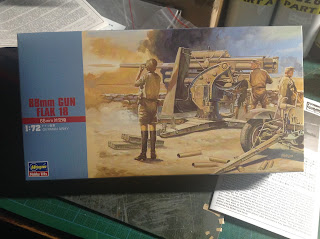 I do love my 88mm guns! Here's my second by Hasegawa, only this time the 18, not the 36, and my fourth 88mm Flak gun. Whereas the others all had their protective shields, this one is without that feature, as indeed many were. I've also modified one of the wire reels, to show it empty. I did want to have some wire on it, but was unable to stretch any sprues to the right length or thin-ness. 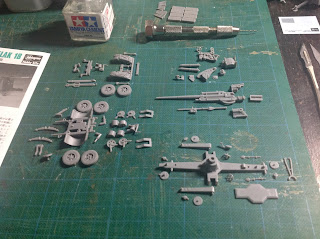 I'm getting into a habit of laying out all parts in groups, for clean up. 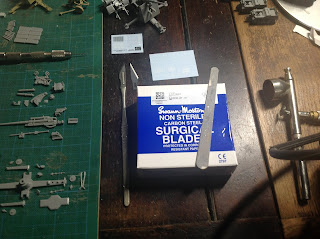 
I noticed in this second build a mistake I'd made on the other Hasegawa gun. But it's only minor - to do with the cruciform gun mount legs/supports (feet?) - and can most probably be easily corrected. I also noted that whilst most of the design of this model is pretty good, one or two steps are s little unclear in the instructions. And some parts could be made to fit better. An example of the latter is the way too large holes for the two levelling wheels on the gun base, which kind of float in a void, until the glue sets. 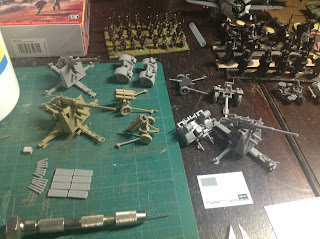 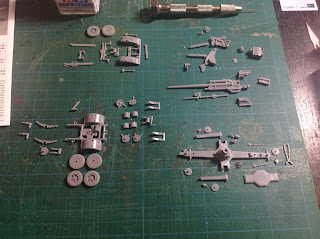 What... no progress? Well, actually this is over an hour later, after all the clean-up.

My obsession with the erdpfahl, or stakes, has made me realise that that's what the two sledgehammers on one of the bogeys are for. Strangely, the two folding limbs of the base have the 'female' holes into which the erdpfahl are driven, in very low relief. But they're not depicted on the fore/aft axis. Bizarre! When time allows I'll be casting some in resin, to further detail all but the Zvezda 88, which actually has them. 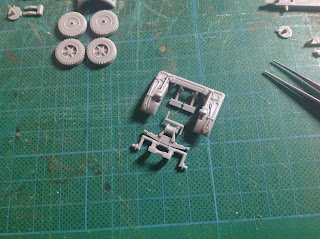 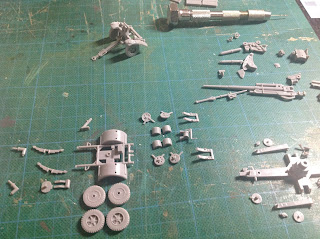 Bogey number one is done. 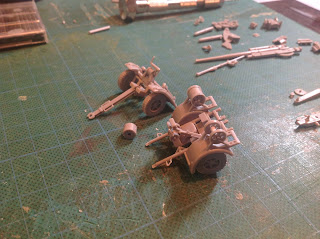 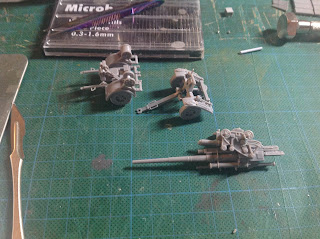 The gun itself; upside down to protect those still-gluing delicate little hand-wheels. 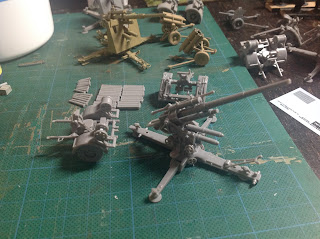 I've another 1/76 Airfix 88 to build, plus bogeys. Think I'll probably do that afore I decide on painting and marking schemes. Plus there's the prospect of some resin casting for extra details, such as erdpfahl and ammo/ammo containers, etc.

Build wise, it's good to be getting back into modelling. I must confess I'd prefer there to be less clean up time, a stage I find pretty tedious. Review wise, I rate these Hasegawa as both fun to build and decent models of the weapon. A lot of the detail one would hope for is present, such as the fuse setter, sextant, and even the bell (and wiring) on the left side of the gun mount. Zvezda's Flak 36 may have more and better detail. But it doesn't have the bogeys, which is a real shame.
Posted by Seb Palmer at 02:09