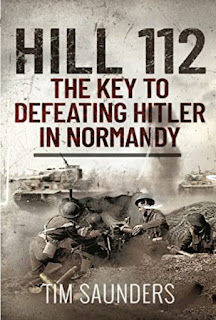 Another very enjoyable book by Tim Saunders, on the post-D-Day Normandy campaign (I’ve read a couple of others by him, on similar territory!.

I’m always worried, esp’ at the outset of, that the sheer detail in a book such as this is going to overwhelm me (and in all honesty I think I retain very little of the densely packed info’ presented). But, in the end, I’m very often carried along. Such is the case here. So Saunders must be doing something right!

Hill 112 is a piece of high ground Monty’s forces battled the Germans - many of the latter being SS units - for, both sides ranting and needing the commanding position it gave. So it became a hotly contested and bloody battleground. We have Tiger-phobia, massed artillery, air superiority (Allied, of course), naval bombardments. All sorts!

I feel like I’ve read about this Hill 112 action before? Poss in another book by Saunders? Or perhaps in a book by another author? Either way, the story of the back and forth action seems quite familiar! But I don’t mind reading about the same thing multiple times. In fact I like it. That way one can gradually accrue knowledge on a subject.

This account is detailed, well written, and liberally illustrated with both wartime photos, some more recent images of the terrain as it is now, and quite a few maps. There’s also a glossary of acronyms and initialisms. Despite this latter feature there are still instances of abbreviated terms used in the body of the text that are missing from the glossary!

I enjoy the use Saunders makes of primary sources. They help make the action more vivid. But I also enjoyed the higher level ‘command and control’ aspects. Reading this has made me want to learn more about Monty’s D-Day and Normandy campaign. He’s often criticised (perhaps mostly because of Arnhem?), but his plan of pinning German forces in place so the Americans could break out was very successfully and effective.

Anyway, if you have a strong interest in the Normandy campaign, as I certainly do, then this is definitely worth  reading.