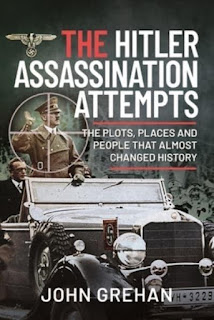 I thoroughly enjoyed this pithy account of the many attempts made on Hitler’s life. In all about 60 or so are covered.

Some of these were carried through - Elser, Stauffenberg - many were attempted, only to be aborted, and a great many were never put into action, for a whole host of reasons.

Grehan’s writing style is solid: in fact he covers a great deal in a very succinct manner, and he seems suitably circumspect where evidence is scant, concluding that some of these alleged ‘plots’ are most likely false.

The many attempts on Hitler’s life span almost his whole political career - 1921 to 1945 - meaning that this book not only tells the fascinating stories of the many plans to be rid of him, but also the broader history of his rise to power, international brinksmanship, with initial success both in peace and war, and finally his eventual apocalyptic downfall.

If, like me, you’re fascinated with this era of recent history, I’d recommend this. I really enjoyed it.