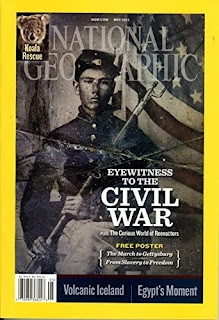 I recently got a(nother) whole bunch of National Geographic magazines (150 issues!). Something I occasionally do. We have tons more, boxed up in our attic!

And I posted on here, back in (I think?) 2014-‘ish, about a quest to find several specific issues. Those particular editions dealt with the ACW - around the centenary, so mid-1960s - and featured artwork that had haunted me for decades.

But in researching and tracking down those issues, and finding out who that elusive artiste was (David Greenspan), I became fascinated by the other forms of artwork as well. In particular that of the ‘Specials’, or special correspondents, what we would now call war artists.

Frank Vizetelly became a particular fascination. Partly because articles about him, and even a book, were available. But anyway, I mention all this because, amongst all the Nat Geog’s in this latest haul, there’s a May 2012 one with a couple of ACW themed pieces.

One of these concerns re-enactors. And that’s interesting in its own right. But the one that really caught my eye was about the ‘Specials’. It’s kind of funny to think that around the same time I was obsessively searching for the old ‘60s issues, NG themselves were also fondly remembering similar aspects of the history of that conflict.

There a kind of pleasing low-level synchronicity to it all!