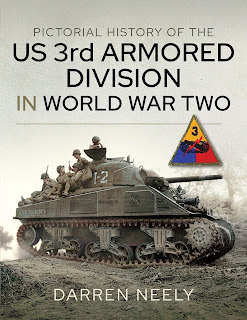 Having just read a text based account of the 12th SS Hitlerjugend in Normandy, this pictorial history from the Allied side of the same Western European theatre was a welcome change of pace.

The US 3rd Armrd Div arrived in Europe about a fortnight after D-Day, and from then onwards was at the sharp end - as befits a unit also named ‘Spearhead’ - from France to Belgium and in into Germany and wars end.

The huge number of black and white photographs gathered together here are a terrifically rich and evocative resource, perfect for the history buff, modeller or wargamer. Split into four chapters, each begins with a short summary of the operations the Div took part in during a given period, and then fleshes this out with loads of captioned photos.

Some of the darker photos could perhaps have been filtered and tweaked a bit for better clarity. And, a pet peeve of mine, it’s deuced hard to relate numerous ‘note such and such’ textual admonitions to the corresponding images, due to them being smaller, cropped, insufficiently clear, or whatever. Hence docking half a star.

Most of the pics depict US troops and materiel, naturally. But there’s also a lot of imagery showing knocked out German stuff. So, all in all a fascinating and useful resource, bringing to life this units crucial part in the post-Normandy Western Front campaign.