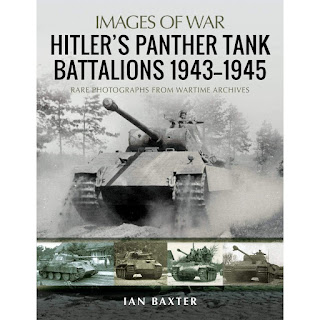 In this slim but well illustrated volume, Ian Baxter outlines the history of the Panther tanks' service in WWII, from its over-hasty introduction in 1943 to its demise, along with the inevitable fall of the vastly outnumbered and outgunned Third Reich that spawned it.

The Panther has to be one of the best looking tanks of WWII, and Germany produced a lot of the funkiest looking AFVs in this period to compete for that position, many of which, the Panther included, remain iconic in the history of armoured warfare to this day. But, as Baxter points out, there were never enough, and rushed to the front as they so often were, either they themselves or their crews were often unready.

In respect of that last point, as the tank itself got better, despite having entered service too soon, and consequently suffering many teething issues, especially perhaps at the legendary tank-ageddon that was Kursk, the overall position and make up of the German forces steadily deteriorated, as experienced crews were irretrievably lost, to be replaced by green under-trained youths and/or the older men of 'ear and stomach' battalions.

This interesting and very useful addition to the ever growing Images of War series arrived in a wonderfully timely fashion for me, as my next modelling project at that point was abother of those hoary old Airfix 1/76 Panthers ('twas this ol' kit that was my first build, or re-introduction to the hobby, on returning to the model-making, etc!). As anyone who's built this model will know, it's a kit that needs some modifications, as it's pretty poor in certain respects. This book proved to be the perfect resource to help me do just that.

After a brief intro, the chapter titles map out the narrative:

All of this is amply illustrated with period black and white photographs. Mostly of Panthers, as you'd expect, but also occasionally of other vehicles that were found in Panther units, like Pz IV, half-tracks and numerous other vehicles, from cars and trucks to armoured cars. Many of the pics will be familiar to grizzled armour buffs, but many aren't.

All in all a solid entry in this series. Well worth having.