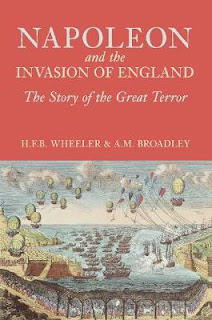 NB - Another of my forays into archival material. I read this book a number of years ago, and wrote and posted a review on Amazon’s UK website, also some years back. This is a slightly amended version of that. I was prompted to revisit it as I’m currently reading the superb Coastal Defences of the British Empire, by Daniel MacCannell.

Napoleon's mooted invasion of England - actually a task set for him by the Directory that he didn't seem to have his heart in (the fact that he hoped initially he might be allowed to live out his exile in England is interesting and revealing) - is a fascinating subject, and I'm quite surprised there aren't a lot more books on the subject than there appear to be.

This book is a reprint of a work written in the early years of the 20th century, and it's age does show a little in two respects: the tone of the writing can occasionally feel a tad dated, and the level of detail reflects an obsessiveness that seems almost Victorian in its zeal. I'm writing this not quite having finished the book, which I started several years ago, and eventually lost impetus with.
This said, the first two thirds of the book were, I felt, fascinating and engaging. Although Boney never seemed to quite believe in it, as a project, yet he threw himself into it with what was to become known as his trademark vigour, endlessly commissioning huge lists of highly detailed jobs for his subordinates, always demanding the next to impossible. As well as a decent if occasionally stodgy and perhaps over long text, there's an abundance of illustrative material, much of which is quite charming, such as the images of invasion via tunnels, floating castles, or even a fleet of dirigibles!
No source is left unvisited, so we are treated to commemorative medals, songs and poems, cartoons, pamphlets, extracts from personal letters, public announcements and military correspondence. No proverbial stone is left unturned. Given that almost every aspect of Napoleon's career is exhaustively written about, it's a little odd to me that, and especially what with our penchant for an overly Anglocentric reading of the era bearing the name of the man many here liked to call the 'Corsican upstart', we're not more interested in his plans to invade our shores.
So, for all that this isn't perfect, at least it's a solid and comprehensive treatment of a fascinating subject. Even though I’m still yet to finish it, I did (and still do) like it. But this is certainly more a book for the devoted Napoleonic history buff than the casual reader.
Posted by Seb Palmer at 23:54