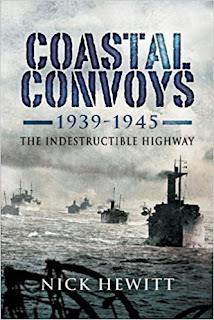 I'm torn between giving this four or five stars. In some respects it's fantastic. And I have really enjoyed reading quite a lot of it.

But, rather like the conditions of the conflict it describes, there are moments of, well... if not boredom, perhaps ennui? In part this is due to a degree of repetition and duplication (probably nigh on impossible to avoid given the subject), and in part because the narrative kind of fizzles a bit around mid-war, mostly as a result of delayed reactions to first Operation Barbarossa, and the subsequent Eastward shift in German attention, and then the entry of the US, and another seismic shift of maritime operations (on the global scale) to the Pacific.

But, on the positive side, throughout the whole war Britain, who initially stood alone (sort of, remembering of course our Empire/Commonwealth resources, etc), had to 'keep the home fires burning'. And it was essentially this (as well as other domestic and international stuff), the supply of coal in particular, that drove the coastal shipping Hewitt covers in this mostly very fascinating and informative account. 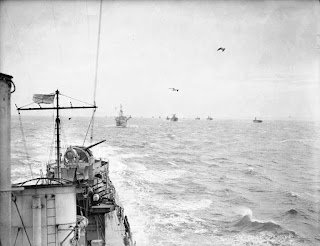 A photograph taken from what I guess is a destroyer escort, of a typical east coast convoy.

The book and its jacket blurb make much of the gap-filling nature of this account, pointing out that it's a largely ignored aspect of the British naval war, overshadowed primarily by the convoys and conflicts of the Atlantic. Ironically I've now read more (i.e. this book!) on this 'neglected theatre' than I have yet to read - I have Dimbleby's 'War in the Atlantic' (unread) - on it's more oft-covered cousin.

Hewitt makes heavy and mostly very good use of all sorts of 'primary' sources (heavily footnoted, etc.), which can and does make some of this very compelling and, as several heaping praise on it in the blurb note, very human. This unglamorous traffic of, in the main, 'dirty little coasters' was essential to Britain's survival: coal came down from the north, to the energy-hungry more heavily populated south; and trade, both domestic and international, had to go on. 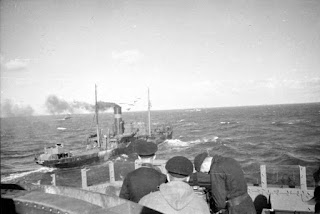 Having geared up for submarine warfare, WWI style, WWII instead saw increased use of mining, air power, and E-Boats, with U-boats only occasionally intruding, meaning Britain started at something of a disadvantage. It's the drama associated with initially coping with and then more or less overcoming these challenges that makes the first half of the war (and the first two-thirds of this book) most interesting.

As much as I enjoyed this, and I really did, and as valuable an addition to the maritime history of WWII as it appears to be, I felt I had to go with four stars on my Amazon review. Here on my blog, however, I can give this four and a half stars, so I do.

This famous bit of footage is mentioned in the book.