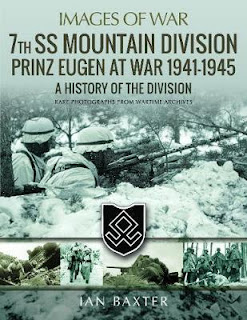 As the cover blurb for this book informs us, Pen and Sword's Images of War series now has numerous volumes dedicated to various SS formations, this being (like it's subject!) the seventh. And from what I gather from reading further they may all be by Ian Baxter.

Whilst the comprehensiveness of the aim is great, the execution isn't quite up to par with the best in the IoW line. I say this because more of the images herein are either of related units - such as Gebirgsjäger (mountain troops), regular Wehrmacht or Bulgarian forces, or SS troops who may or may not actually be Prinz Eugen - than are clearly and definitively of the stated/titular subject. This and the fairly poor quality of some images occasionally make this feel a bit thin and cobbled together. Still, as the Panzerwrecks guy's are fond of saying, a poor quality image is better than no image at all. 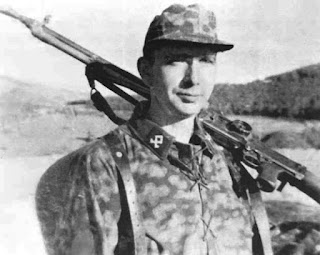 This fellow isn't in the book. 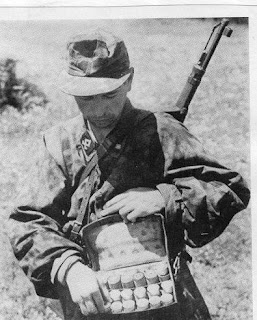 Nor this one neither (I don't think?).

In just over 100 pages, organised as five very short chapters, each preceding blocks of captioned photos, Baxter's main body of text is okay. Very brief and outline like, it does at least stay closer to its core subject than does the visual element. The history of the unit is covered, from its formation to its demise, with coverage of its major deployments/operations and some info on commanders.

Prinz Eugen's main theatre of operations was the rugged and brutal Balkans, where Nazi ideology was pursued with utmost ruthlessness. The 7th SS were instrumental in this, being constantly deployed in anti-insurgency capacities that frequently included merciless reprisals for partisan activity, routinely visited indiscriminately on the local civilian population. No winning hearts and minds here. Whilst Baxter mentions this frequently in the text, there's very little imagery on this aspect, aside from a few relatively innocuous looking round-up/interrogation photos (of course what happened next may have been far worse). [1] 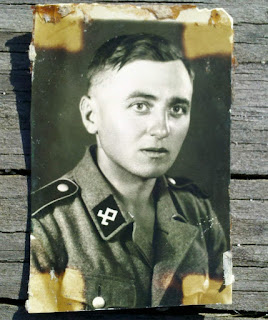 When you see that Odal rune, you know it's Prinz Eugen. 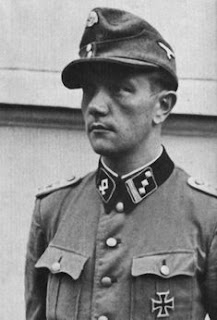 Neither this chap, nor the one above, are in the book.

On the positive side, and despite the fact that the images that are certainly of Prinz Eugen forces aren't always as clear or as copious as one might wish for, the subject is a very interesting one. Called a volunteer (Freiwilligen was part of the original unit title) and Mountain (Gebirgs) unit, it was in fact made up of conscripted troops as well as volunteers. And, as with other units operating in the same region, such as SS Handschar, it stretched or diluted the Aryan superman ideology that was a central tenet of the SS/Nazi creed.

Perhaps in keeping with the inherent racism in this scheme, Prinz Eugen, like more and more units in the German armed forces as time went on was, whilst basically armed and equipped as German troops, issued with less 'purely' Teutonic high-end gear. This is a theme Baxter and the photographs substantiate at several points, and is of interest to us WWII gear nuts. 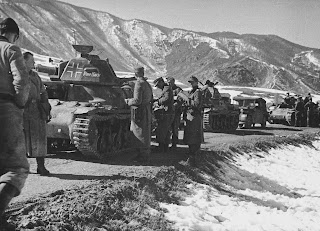 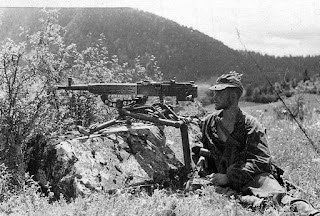 But perhaps best and most noteworthy off all, the landscapes in which Prinz Eugen fought are also sublime, in the original romantic sense, meaning both beautiful and yet terrifying/inhuman. And the weather was equally extreme. The war that was fought in this pitiless natural paradise brought hell to earth in a Dantean way whose repercussions have echoed down into later days. But whilst Baxter touches on the WWII aspects of 7th SS' part in this long-running and often ethnically based tragedy, no real mention is made of the long-term roots or latter 20th Century aftermath.

Some of the picture captioning is redundantly repetitious of stuff in the main text (or other previous captions), and occasionally looks either a bit lazy or slapdash, as when the caption to an image of greatcoat wearing troops without any other visible gear crossing a rickety wooden footbridge opines about the slow progress made in such rugged terrain by heavily laden troops. The caption is of course quite correct. But it doesn't sit well with the accompanying image, which shows very lightly burdened soldiers. [2] 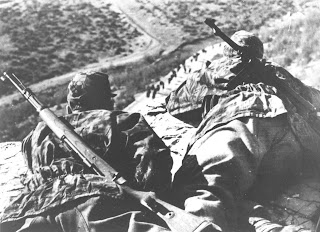 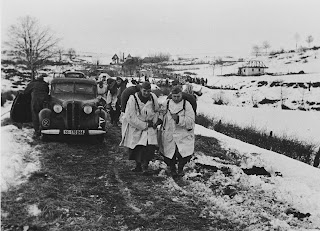 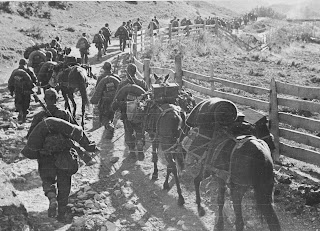 ... and relied on horses and mules as much as trucks and armour. *

Despite all my criticisms, I do like this book, and it is very interesting/useful reference. I imagine over time I'll try and collect all of Baxter's IoW titles on the SS. But it could fairly easily have been somewhat better. And I wish it was. Nevertheless, well worth adding to your library if you're a WWII history obsessive. Especially so if you're particularly interested in the Germans and the SS during WWII (as I am), obviously.

* Any images marked with an asterisk appear in this book. The others don't.


[1] The only image that I feel really captures this aspect of the conflict is a photo on p. 101, (shown below) of a group of prisoners sat in a field. Mostly they're young men, but there are a few women, and there's a fair range of ages. The fear and apprehension in their faces is palpable and chilling. The caption says they're captured partisans. And perhaps they are. Whether or not they are, they seem to know their fate will not be a happy one. 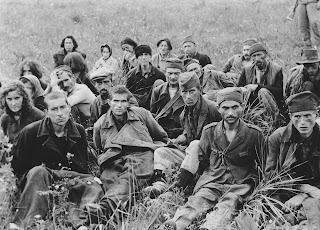 [2] I always feel a bit bad, nit-picking on errors in books such as this which, for any/all their faults, are both very useful, and the work of people as passionate about their interests in the subject no doubt as I am. But on the other hand, we should all strive for the best we can, and especially so where the enterprise is also commercial. So for example the combo of poorly cropped image and subsequently redundant caption in the lower portion of page 94, in which we see naught but a soldier's head and the empty sky, and not the pack animals the caption refers to, shouldn't have passed the editorial process. 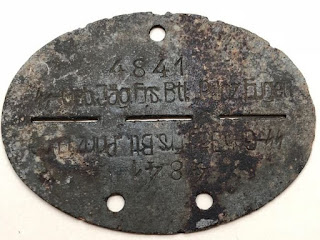 Inclusion of a few artefacts, such as this I.D. badge would've been nice.