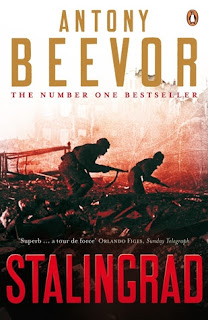 Antony Beevor has a talent for writing military history that reads almost like an action novel. His account of the demise of the German 6th Army - the largest in the entire Wehrmacht at the time - during the fight for Stalingrad, is gripping.

The colossal scale of war on the Ostfront, and the barbarism of both sides, driven by pitiless ideologies, make this theatre particularly and ghoulishly fascinating. And, as is often said, Stalingrad is commonly viewed as the turning point both in this conflict, and the war at large. 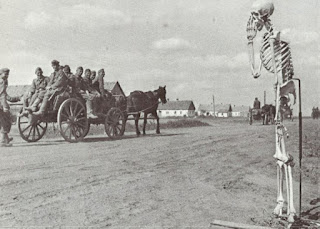 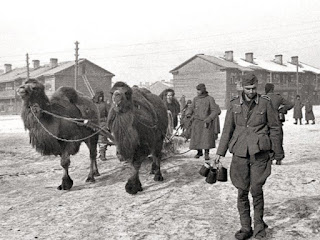 The Germans pressed all available resource into their service.

Hitler and Stalin both became maniacally obsessed with imposing their will in this contest, neither permitting their beleaguered troops to give up or retreat. The profligacy of lives on both sides is truly appalling. Beevor, like the reader, is clearly enthralled by the carnage.

It strikes me that Hitler allowed himself to be deflected from his original goal of securing the breadbasket of the Ukraine and the oil of the Caucuses, and was lured into a wasteful concentration on prestige targets, namely cities: Leningrad, Moscow, and Stalingrad. 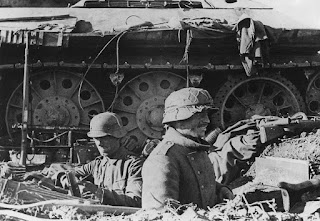 Germans dug in beneath a knocked-out T-34. 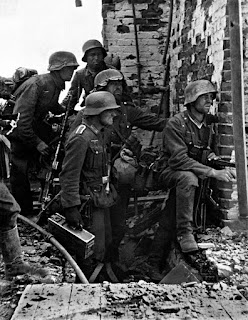 A famous pic. of German troops amidst the rubble of Stalingrad.

These battles favoured the Russians, as they denied the Germans the undoubted advantages of their mobile 'blitzkrieg' tactics, drawing them into static battles of attrition, in which the weight of Soviet numbers could be used to wear the Germans and their sometimes less than enthusiastic allies (Italians, Romanians, Hungarians, etc.) down.

The detail of the battle itself is well conveyed. Although I'd have liked a few more maps to have helped track how things developed. And Beevor manages to move pretty deftly around the theatre, from the action amidst the rubble to developments elsewhere on the flanks, without spoiling the narrative flow. 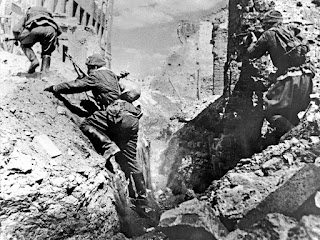 You can easily see how arduous such street-fighting must've been.

He also moves smoothly through the various gears, from the top brass, with their concerns of ideological and personal prestige, down the chain of command to the God-forsaken 'grunts', fighting for their lives in a Dantean inferno, the hellishness of which is made all the worse by the inhumanity of the political ideologies that drove this conflict.

On that topic, one thing that really strikes me, the more I read about Russian history during Stalin's reign, is that - whilst Hitler singled out certain groups, in particular the Jews, for merciless persecution - 'Uncle' Joe seems, whilst preserving a glacially cool exterior (unlike the often apoplectic Führer), to have been a psychotic mass murderer of a far more wide-rangingly brutal and paranoid type. 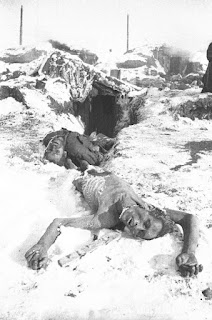 Russian POWs who starved to death in Stalingrad captivity. 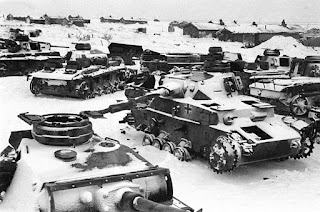 Another striking thing is how many Russians sought to join the Germans. Some might well have done so just as a means to survive. But many, especially those persecuted under Communism (e.g. Kulaks, Cossacks, Poles, Ukrainians) initially saw the Germans as liberators from the Stalinist/Communist yoke.

According to Beevor the NKVD, part of Stalin's internal police/terror apparatus, were shocked and appalled when they discovered how many Russians were collaborating with the German invaders. These 'Hiwis' (from 'Hilfswillige') in places made up as much as 25% of German forces, and some estimates - unsurprisingly uncertain in the fog of war - run as high as 80,000 for the battle at Stalingrad itself. 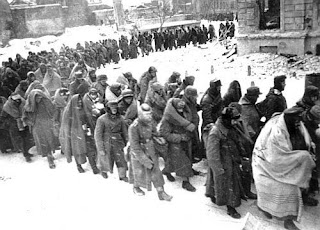 The pitiful remains of VIth Army, passing into captivity. 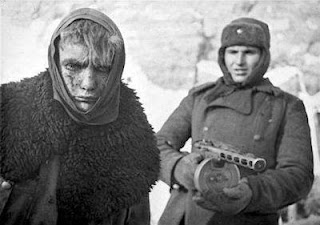 Young aryans of the vaunted 'master race', reduced to troglodytes.

In typically Stalinist fashion, such people became 'former Russians'. Caught between two such appallingly inhumane ideologies the sufferings of all concerned were, frankly unimaginable. But Beevor does a damn good job of trying to convey how things were, and it makes for terrifically gripping reading.

[1] Little did they know how prophetic this macabre roadside attraction would prove to be.
Posted by Seb Palmer at 20:54