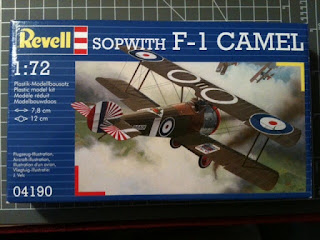 As I'm currently stumped by the rigging for my Langton 1/300 Dutch Gunboat, I was exploring methods for producing ropes and wires, etc. Although it's probably of no use re that particular kit, it being metal, resin and suchlike, I did watch some sprue-stretching videos on YouTube, as they came up when I googled various rigging related searches.

So, just for the fun of it I found some spare sprue and had a go. I've done it before, of course - WWII tank aerials, for example - but I wanted to see if I could replicate what this chap Hamilkar Barkas does, where he draws the thread of sprue to an arms fully outstretched length.

I managed this feat on a few occasions, which was gratifying. It then set me wondering what use I could make of the resultant styrene 'cabling'. I recalled I had two small Revell WWI aeroplane kits, originally bought to build with a Slovakian buddy (who moved to NZ before we got around to them), in my stash.

Fully aware I was going to be diverging from the path I'm supposedly following - as I so often do - I thought, 'So be it; whilst the ship's docked at Port Indecision, I shall build WWI fighters!' 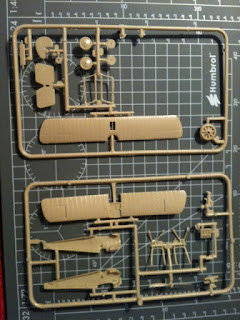 As these two sprues show, this is very a simple minimal kit.

I started by hand-painting (i.e. using paintbrushes, not airbrush or aerosol) the cockpit interior and pilot. I like how the pilot turned out. And the mucky cockpit interior, whilst it looks like fresh-daubed clay, is fine, as it'll be almost invisible. 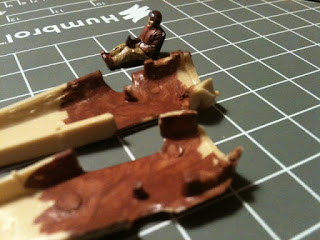 Next came the tail and twin machine guns. I painted the guns prior to cementing in place. This proved to be a redundant move, as you'll see in dew coarse. 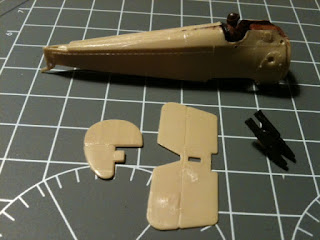 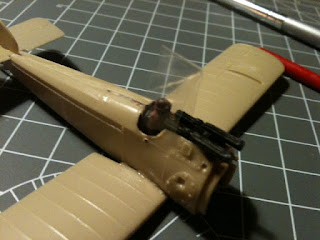 Two pics of my various attempts to mask the pilot, ready for undercoating. Above, a portion of a plastic 'baggie'; below, some Tamiya masking tape. I went with the latter! 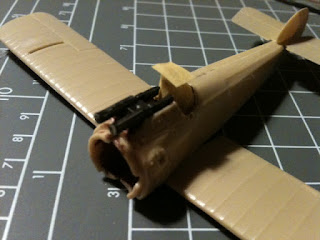 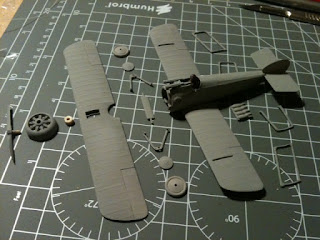 An aerosol base coat in Matt grey.


The airbrushing was a nightmare! I really must get properly kitted out. I'm still using my very basic Badger, with a canister of compressed air, rather than a compressor. Getting the paint consistency right - never mind the colours (my beige and green were both mixed in a very ad hoc manner, and simply judged by eye; I realise they probably aren't quite right, but they look ok to me!) - was only one of several fraught steps.

I've decided to start using acrylics, as modern Humbrol enamels aren't quite what they used to be. Or so it seems to me (perhaps it's just me that's changed?). The main reason for the change is the speed at which they dry; acrylics  are so much quicker. I do have a load of modelling acrylics, mostly Vallejo, but I couldn't find them, as pretty much everything's still boxed up from our recent move; partly 'cause we're supposedly only where we are now temporarily.

Once the paint is the consistency of single cream, I judge it to be about right. Perhaps part of my troubles with airbrushing is this? Ought the mix to be thinner, like full-cream milk? I currently have to mix the colours in the airbrush paint-reservoir, using artists acrylics, a palette-knife, and a pipette for the water.

I find that simply getting any paint to flow is tricky: the air supply is weak and temperamental (I have to continually shake the can, and the current one appears to be leaking propellant somewhere around the valve); the alignment of the paint-supply and air-supply nozzles has to be micron-perfect (and seems to change!); and the paint-supply channel continually clogs. Aaaaarrrgh! 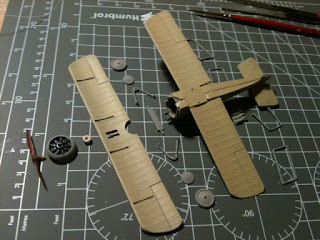 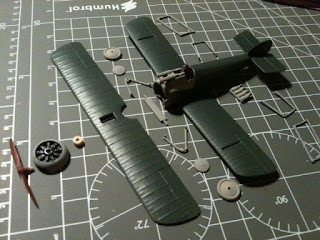 The main green areas blocked in with the airbrush. 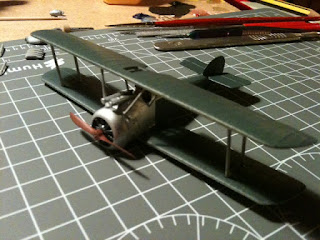 The Camel at the end of Saturday night.

I didn't get very much done today - we were out mostly (& I bought an amazing book about building a model of HMS Victory at an antiques shop) - just painted the struts holding the wings together, and painted and assembled the landing gear. Still got decals, rigging, and detailing/weathering, etc. But she's looking like a proper WWI fighter now.

You can also see two 'female' holes, which look like they're for some other running-gear assembly! Also visible are the bits where the struts sit and glue into the wings. I'm not sure that I'll go as far as trying to fill/smooth these areas. But I'll probably touch the paint up by hand, at a later stage. Colour matching may be an issue! 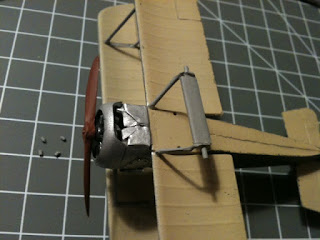 The underneath is darker than I'd intended it to be, approaching the ubiquitous dunkelgelb of mid- late-war German WWII armour.

At the stage pictured above I had to remove four redundant male 'nipples' from the landing gear, as there are no corresponding female parts into which to insert them. Trying to brush paint this area with the green acrylic I'd mixed for the body and wings was a no-go, as it was water thin. So I mixed some Humbrol enamels. It's not an exact match, but it'll do for this model.


I decided to hand paint the inner part of the wheels in red and white, and turn them round - drilling holes all the way through so I could reverse them. This allows me to use the decals on what would have been the inner face.  I can't quite recall why I did this, but there was some rational reason! I think it had to do with the part intended as the outer face being easier to hand-paint in the red and white ring patterns. 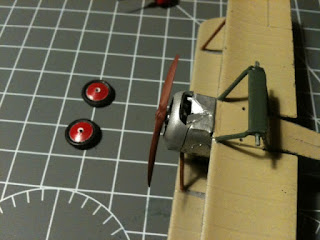 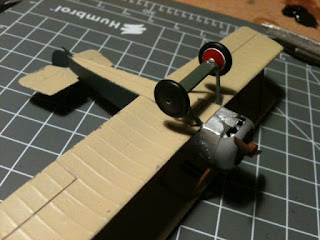 Above, the running gear seen from underneath. Below, seen with the plane on her feet. 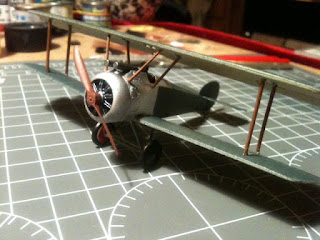 It's both a monday, the day we used to regularly make models together, and his 66th b'day. He's at home recuperating from a triple heart-bypass, and apparently not feeling too well.

Chin up pops, and get well soon! 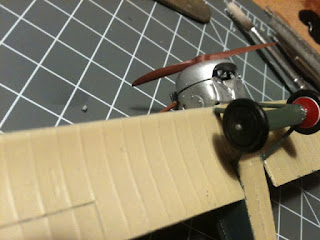 I found a use for a couple of the 'nipples' I removed from the running gear frame, re-inserting them into the axle-holes, as pictured above. 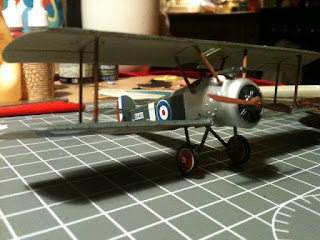 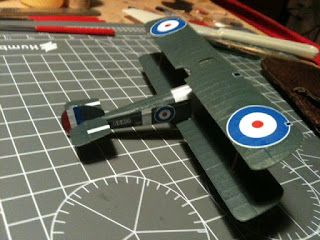 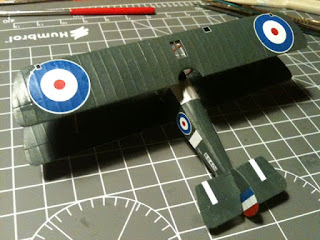 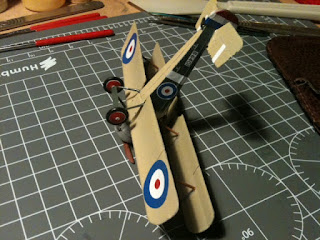 Oops, I think this pilot's been at the gin!

Today was mostly about decals. I went to Ely City Cycle Centre, and bought some Humbrol Decal-Fix liquid. I really want get Micro Set and Micro Sol. The Humbrol stuff doesn't seem that great. It helps attach the decals, but doesn't really help make them follow the contours of the model.

Nevertheless, as basic a job as I've thus far done, the decals do take it to another place. As these pics show, the decals and paintwork need some finessing - there's the sprue rigging, general tidying up, some detailing, weathering, etc. - and then the whole lot needs varnishing.

But as my first 'serious' model aeroplane build (the Hasegawa Egg plane, funn as it is/was, doesn't count, somehow) since childhood, I'm happy. I also have a Revell 1/72 Sopwith Tri-plane. Might try and make that as well, before my next teaching term starts.

[1] I also find the relatively recent decision of some manufacturers, Revell amongst them, not to print swastikas, equally annoying. I can understand the issue with the swastika, it's connotations having been so profoundly tainted. Even so, I think it's an unwelcome form of over-sensitive historical Bowdlerisation. But I really can't see why they would do what they've done with the RAF roundel at all. Is there a reason?
Posted by Seb Palmer at 22:21