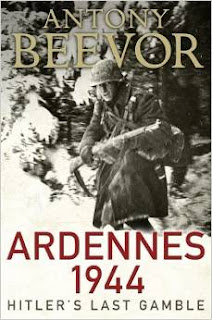 I bought this, my second Beevor book (Stalingrad was the first) at a recent Topping Bookshop talk delivered by Mr Beevor himself. Without any explanatory preamble he plunged us straight into the freezing bloody conflict of the Hürtgen forest, a messy prelude to the what is now best known as 'The Battle of the Bulge'.

For a while I was really rather confused, but as he built up to his central theme, what the Germans initially called Wacht Am Rhein (Watch on the Rhine), a deliberately defensive sounding name (they later renamed it, rather poetically, Herbstnebel, or Autumn Mist) for the offensive that was to be Hitler's final throw of the dice in the West, things gradually fell into place. At first I felt annoyed by what appeared to me a deliberately confusing gimmick. But then I warmed to it, realising Beevor had rather cleverly imparted to us, as we sat listening in a church in Ely, something of the confusion of battle. 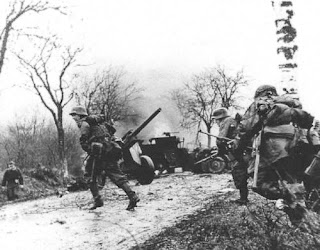 The German attack certainly came as a surprise
but it quickly lost steam and bogged down.


It may sound fatuous or redundant to describe a book as highly readable, but of course different authors have different voices, and different approaches, making some more or less easy to read for their equally varied readership. Beevor is, it seems to me, the consummate popular modern military historian, able to tell an engaging story, whilst weaving in a lot of detail on numerous levels, from the strategic or tactical to the political, whilst also giving both the big picture and the small vignettes, the broad sweep of events being enlivened with enough ground level detail to keep it humane and stop it being drily academic.

After setting the scene, the central core of the battle is described day by day, rounded off by a kind of 'mopping up'. During the course of telling the tale of this epic battle - in which Hitler's German war machine managed to scrape together a very sizeable strike force (far larger than anything the Allies deemed the Germans capable of raising, hence the 'calculated risk' which left the Ardennes sector so poorly defended), and then inspire them to attempt a last-ditch effort to reverse the flow of the Allied forces over the Rhine and into the Fatherland - certain themes emerge.

One theme follows the rise and fall of German hopes and morale, whilst another charts the mirror image in the mostly American Allied camp. These contrapuntal themes are further complicated by a parallel and dissonant theme, which Beevor more or less lays at Montgomery's door, even going so far as to speculate on the possibility of Monty suffering from Asperger's syndrome. As Allied fortunes revived, thanks, according to the story as it's told here, to Monty's overweening egotism and a tub-thumping British Press [1] (some things never change, eh?), Britain's attempts to maintain a central role backfired, seeing them levered out of the decision making process. In a way this isn't so surprising, as the statistics speak for themselves: by this stage of the war the Western theatre was clearly and irrefutably an American 'show'. Even the French, fighting to reclaim their own territory, had to play second fiddle to the Yankee Doodle Dandies. 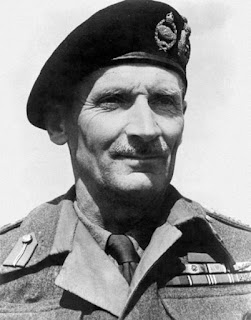 Monty's repeated demands for overall command
of forces in the north really cheesed off the
American chiefs. 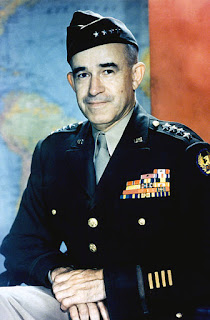 Bradley's ill-preparedness, distant and ill-informed
command from Luxembourg, slow reactions, and then his
spat with Monty, don't show him in the best light.


But although Beevor's account might be seen, rather intriguingly, Beevor being a British author, to pander somewhat to a U.S. viewpoint, he doesn't let the American brass off scott-free: everyone from Eisenhower to Bradley can be seen to dither, or put their own reputations (prestige is a word that crops up a lot in discussions about the internecine strife in the command structure) before the best laid plans or the well being of their troops. And the other side of the American coin is all too often the kind of blusterous bravado of commanders like Patton, who give the impression (as does this account of Bradley) of being every bit as egomaniacal as Monty.

Beevor's decision to progress chronologically rather than by theatre or operation gives the narrative zest and pace, but, as some other reviewers point our, can be confusing, as he jumps around. In relation to this, this book has better maps than many on such subjects, but I still found I couldn't always keep the topographical picture in focus, especially as the narrative hops all over the place. And it also switches constantly between the various sides, Allied and German, or nations within a side, American and English (not to mention Canadian, French and Belgian!), or even between military and civilian. 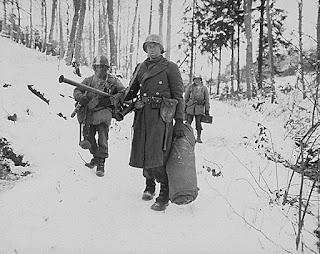 This pic. appears in one of the several sections
of black and white photos.


Another interesting theme, only obliquely alluded to in the text, is the way in which war, such a horrifying and wastefully destructive process, remains so seductive and alluring (another more critical review of this book rather amusingly refers to WWII as 'the gift that keeps on giving', in relation to Beevor's professional success). Abraham Lincoln aptly describes it thus: 'Military glory - that attractive rainbow, that rises in showers of blood - that serpent's eye, that charms to destroy...' I sense that for all his handwringing, Beevor kind of revels in the horrors of war, as do us readers, rather like the traffic that inevitably slows down and rubber necks in the opposite lane when there's been an accident in the motorway. Whatever the truth of this complex and uncomfortable area, Beevor's account is a richer and better one for the inclusion of this dimension. 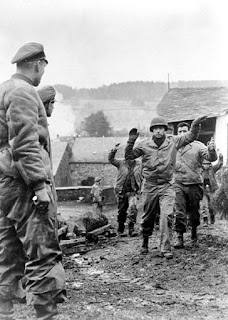 What will be the fate of these 'doughboy'
prisoners? They certainly look anxious!
(This pic. is also in the book.)


I recently watched the superb Brownlow and Mollo film It Happened Here, about a successful Nazi occupation of England. I admired that film for its unflinching depiction of such awful yet ultimately mundane horrors as the casual execution of prisoners, by both sides. It's to Beevor's credit that he highlights the hypocrisy, albeit tempered by some considerations (I won't go into the detail here, you can read the book!), that must inevitably surround the condemnation on the one hand of the SS massacres of prisoners and civilians, and the 'reprisals' carried out by Allied troops (war, it seems, is almost always a 'reprisal' for some real or imagined wrongs visited on the aggressor at some prior point!).

By the end of the book the German offensive has failed, in the process draining troops from the far greater threat posed by several millions of Russian troops knocking on the door [2] of Germany's Eastern Front. Beevor delivers the story in an engagingly compelling form, turning the applying suffering and carnage into something very enjoyable for the reader. What a bizarre alchemy military history effects! I thoroughly enjoyed reading this, and now want to re-read Stalingrad, and get/read Beevor's Berlin and D-Day books.


I was reading this whilst in Belgium for the Waterloo 2015 celebrations. Whilst in our local supermarket (which was small but absolutely fabulously well stocked) I saw these: 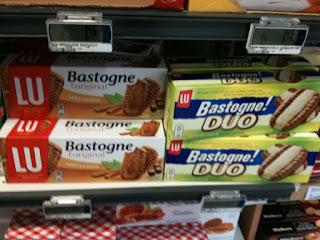 On a more sobering note, this is worth watching, as a reminder of the potentially traumatising legacy of warfare:

[1] The Daily Mail was conspicuous in this role, and is the only paper mentioned by name as contributing to the souring of Anglo-American relations thanks to its part in this sad episode of nationalist chest-beating.

[2] Ironically Hitler's comment at the opening of Operation Barbarossa - 'We have only to kick in the door and the whole rotten structure will come crashing down' - proved much truer when the roles were reversed.
Posted by Seb Palmer at 07:48