Having just posted a brief note about the second one of these I built (over the last couple of days), I thought I'd root around and see if I took any pics of the first one (built late Nov. 2014). I did. But, as with the second build, not many! 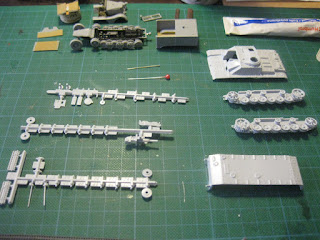 Above - During the build: running-gear assembled. In the background one of my Special Armour Nebelkraftwagen is also being constructed. 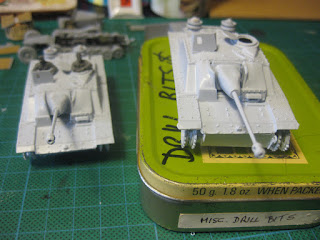 Above - This was one of the kits my dad and I made versions of together. On the left is mine, and on the right, my father's. I've placed two Caesar miniatures Panzer crew figures in the open hatches of my vehicle. 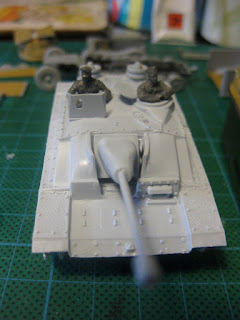 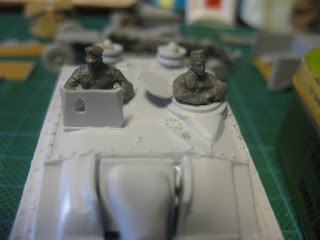 A close-up of the crew. 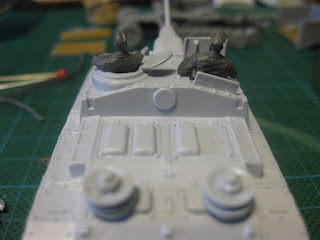 The same guys, viewed from the rear. 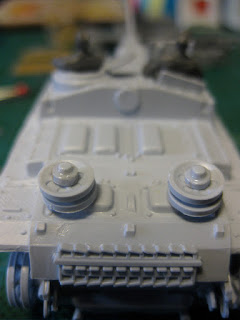 This pic clearly shows the coarseness of my
scratch-built spare-wheel retaining plates! 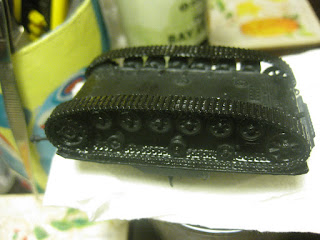 Above, the kit is undercoated in matt black, sprayed on. The tracks were over-painted, also in matt black, but with a brush using Humbrol enamel. Strangely, the enamel came out gloss!? 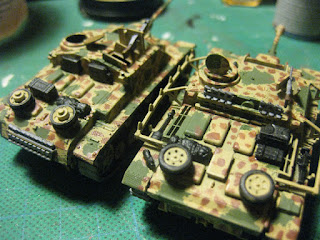 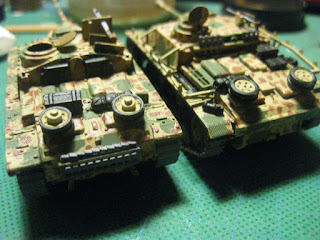 The above two pics really highlight the difference between the spare-wheel restraining plates, as modelled by me, on the left, and Revell, on the right. Mine have the high calorie high profile of Mr Bassett's edible confectionary boater! 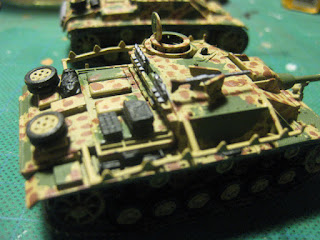 The series of six pics of the Airfix and Revell kits together, shown both above and below, give numerous views of the paint scheme I opted for, based on an image (immediately below) from the very useful Panzer Colours series*. The Airfix model is shown alongside a Revell Stug, a far superior kit in almost every conceivable way. Having said this, I think I get nearly as much pleasure building the Airfix kit as the Revell one. And that's the most important thing for me!

I added a few bits of stowage to both vehicles. The Airfix Stug also got a white metal MG34 (I think all the white metal extras I'm currently using are from Sgt's Mess) . I'd also like to add a fire-extignguisher and some tools, etc. Also, almost all original archive photos of German WWII tanks and other AFVs show buckets hanging off the rear somewhere. Anyone know where I can get 1/72 or 1/76 buckets? I'd try scratch-builinding them, but I reckon someone probably already makes them (in resin, I'd imagine). And they'll doubtless be better than my efforts!

The camo' scheme doesn't look great at this stage, being rather blotchy and crude (painted with a brush, by hand!). But I'm hoping it'll look better when 'knocked back', with a dusting of dunkelgelb. We shall see! 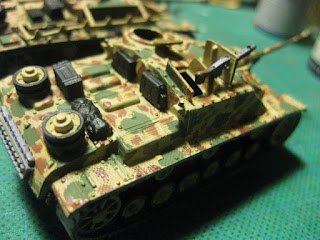 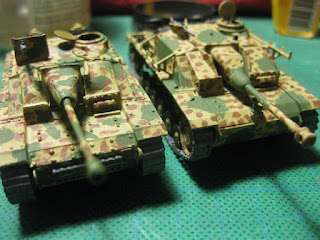 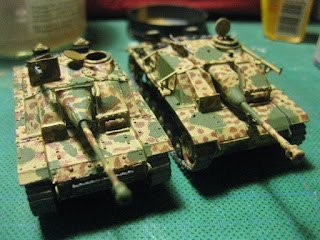