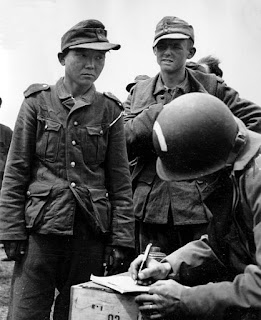 Yang Kyoungjong, who's life story in WWII is tantalisingly bizarre.


Numerous things prompt this post. Having just read (and thoroughly enjoyed and been educated by) Ben Shepherd's Hitler's Soldiers, and also recently having watched, entranced and appalled, the amazing Russian film Come And See, one thing that has struck me as particularly odd and intriguing was the role of foreign troops in German service. [1]

That the Germans made cynical use of POW's and others, from Jews of all nations to intellectuals or Communists from occupied territories (and even Germany herself) as slave labour is well-known, and accords with the brutal tenets of Nazism. In this short post I just want to very briefly look at a few of the many people who did fight, willingly or unwillingly, alongside the Germans.

Looking every bit like the prototypical SS officer, with a firm self-belief in his belonging to the 'master race', Christian Frederik von Schalburg was a Dane who served in SS Wiking, before founding the Frikorps Danmark. [2]

Spanish troops of the Blue Division. 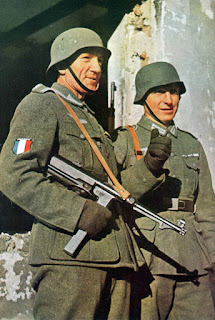 
As well as such political/military allies as Italy, Hungary, Bulgaria and Romania, Germany's Axis partners, whose troops all fought alongside the Germans at various times, there were also numerous units made up of foreign troops, such as the Spanish Blue Division, the Frikorps Danmark, and so on. 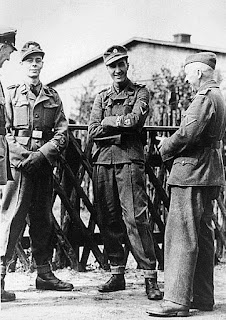 Kenneth Berry and Alfred Minchin, two of the very few Britons who responded to calls for a British Free Corps.

British fascist John Amery even suggested to the German leadership that there should be a British outfit, which was eventually called the British Free Corps. Primarily recruited from British POWs, and sold as a crusade against communism, apparently only about 50 or so men ever joined, and the unit never exceeded 27 men at any one time! Amery, son of the very prominent politician Leo Amery, was hanged for treason in 1945. 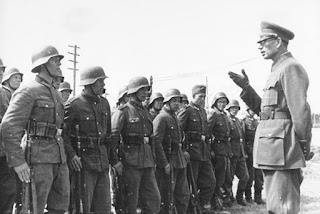 
If alliances with Communist Russia, and even Japan - given that these were considered 'Asiatic' peoples, and that that term was a byword for backward and barbaric in the German/Nazi lexicon of this era - seem odd enough, there were still stranger bedfellows, such as the Bosnian Muslims who became SS troops in the Balkans campaign.

The Grand Mufti of Jerusalem at a parade of the 1st Croatian or 13th Waffen SS Mountain Division, aka Handschar. 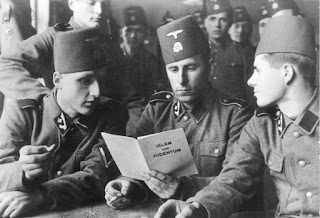 Men of the Handschar [4] Reading propaganda material (one assumes?).

As Ben Shepherd discusses in Hitler's Soldiers, whislt the German army wasn't inherently Nazi, it colluded with the regime in order to see itself grow and prosper. And as the war went on it grew every more enmeshed and compromised in the crimes the Nazi regime was perpetrating. Therefore, to arm such people as they did, and have them fight for their cause? It does seem rather odd, to my mind. [5]

The Nazis were very reluctant to employ women in their war effort, especially German women, who they saw as wives and mothers, not warriors. And given the deeply racist nature of Nazism, the actual fact of these many native auxiliaries (as opposed to the volunteers from places like France, Spain and Denmark, etc.) seems a strange mix of hypocritical utilitarianism on the one hand, and an acceptance, on the other, that one can't simply wipe whole people's out, but need their co-operation, if only to wage a war the eventual aim of which is to wipe those same people out.

Well, war is madness, I guess! 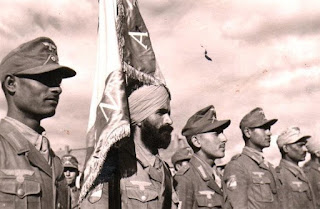 The Indian Legion, originally a Wehrmacht unit, was transferred to the SS eventually.

Despite the messy complexity of the subject, there are numerous examples of this happening in the German Army, ranging from Sikhs of the Indian Legion fighting the Allies in Normandy, to Russian 'volunteer' units, containing troops of numerous ethnicities, and even Croatian Muslims in the SS, and Cossacks acting as police type auxiliaries. [6]

Cossacks in German service, on parade. 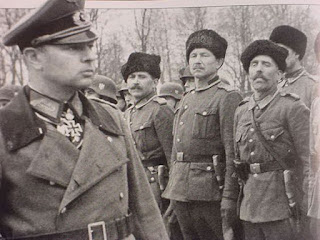 Moustachioed Cossacks on parade, under the stern eye of a German commander.


At the top of this post is a picture of Yang Kyoungjong, a Korean who, aged only 18, was press-ganged into Japanese service, having been conscripted in Manchuria, the Japanese puppet state on Chinese territory, to fight the Russians. Captured by the Russians, after a spell of forced labour he was sent to fight the Germans, who, in their turn, pressed him into service. The picture shows him, in german uniform, being registered as a POW by the Americans (he settled in America, where he had a family, dying in 1992).

A South Korean documentary has concluded that the evidence for his existence is not conclusive. I hope the story is true. It'd make for an amazing film ... Indeed, there is such a film, called My Way, made for the Asian market). I've got to check it out! 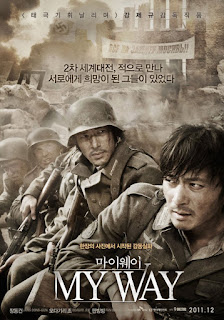 [1] Other things I've seen that stimulate this thread include uniform illustrations in Blandford's old Uniforms of WWII book (a German cossack auxiliary, in particular), Anthony Quayle pretending to be a German pretending to be South African in Ice Cold In Alex (not strictly in line with this topic, perhaps, but a reminder about the multinationalism of WWII and the shifting and varied allegiances people might have), and ... well, see note 6 below.

[2] Schalburg was killed during fighting in the Demyansk Pocket, attempting to lead from the front, in true hung-ho SS style.

[3] There's an interesting scene in the five-film Russian epic Liberation, in which a character who looks very like Vlasov tries to recruit some Russian POWs. He also talks briefly to Stalin's son, Yakov Dzhugashvili, suggesting a prisoner swap with (I think?) Gen. Paulus.

[4] I wondered what the units name meant. Apparently, according to some 'talk' on the wiki page: 'The name "handschar" is the German spelling of a Balkan word for a sword or knife, ultimately from Arabic khanjar (خنجر).'

[5] It's a bit like Afro-Americans fighting for the South. And indeed, some did. But that's a whole other story!

[6] There are some chillingly repellent characters in Come And See who are clearly Russians in German service, aiding in the burning of a village and its inhabitants. As Alan Clark says in his study of Barbarossa, Russia was the theatre 'where the septic violence of Nazism festered openly', in 'scenes of not so much medieval as of pre-Roman barbarism'.
Posted by Seb Palmer at 15:28