Teresa and I have been enjoying 'late-summer-break' part II, in the impossibly picturesque setting of Robin Hood's Bay.

Once again, I can't bear not to be a-hobbyin', so to speak. This time I decided to embark upon a Spitfire build, having purchased an Spitfire from a shop in March (the town, not the month!). 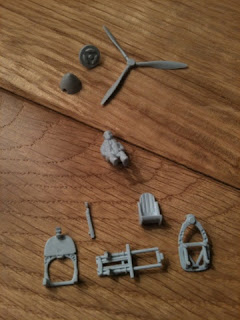 The timing of these Me109 and Spitfire builds is poifeck, as I'm currently mid Battle of Britain in James Holland's excellent War In The West. 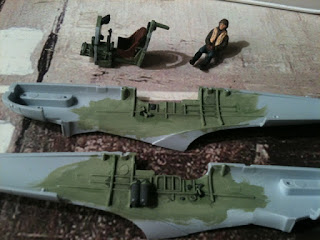 This time I bought my portable modelling kit with me. So I was much better prepared for the neskassary pre-build cockpit painting stages. The Spitfire cockpit proves to be a fun and interesting one, with all the frame detail, and whatnot. 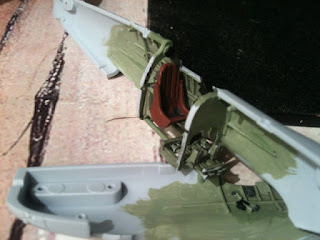 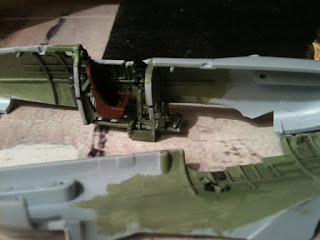 One major flaw with this particular Airfix kit is that the pilot doesn't fit into the cockpit. He's too broad of shoulder, for one thing. As well as paring back his shoulders, I also had to lop of most of his feet, to allow him to sit right. 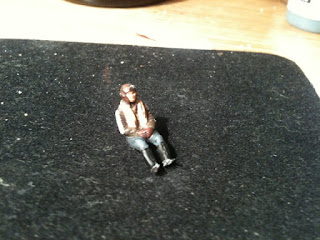 The internal cockpit detail also seemed too wide for the two halves of the fuselage, resulting in the need for me to manually hold the central part of the body together whilst applying serious amounts of glue and pressure. 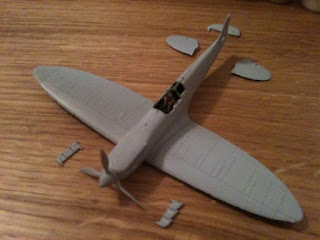 My final pic for this post shows the tail nearing completion and the cockpit canopy positioned (sans glue!). The latter step required some jiggery-pokery, and a wee bit of brute force, in order to get it sitting correctly. 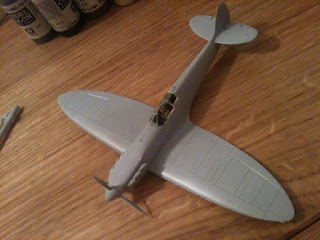 So, whilst its far from finished, I can report that, some hassly stages aside, this is a fun and good-looking kit. The issues of fit, partic. re the pilot and cockpit, do need sorting. But otherwise this model goes together pretty well, and pretty straightforwardly.

Not a perfect model, but not too bad either. Certainly fun to build. And, at just £5.99 (what I paid for it), good value.

Sunday - Finished off the construction of this fun if flawed little kit today. Just have to transport it to the home-base without damage, and get her painted. 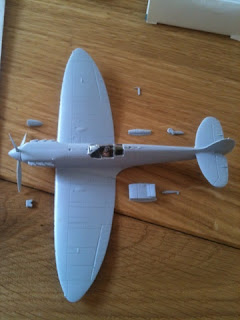 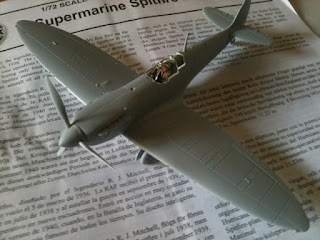 Tuesday - Did some touching up of paint damage in the cockpit and pilot areas of both the Me109 and the Supermarine Spitfire, and then glued the cockpit 'glass' in place. Spitfire was easy, due to snug fir and one-piece construction; Me109 was damn tricky, owing to three 'glass' parts and one opaque bit (pilot headrest). 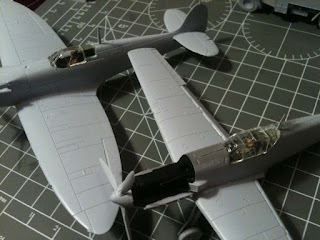