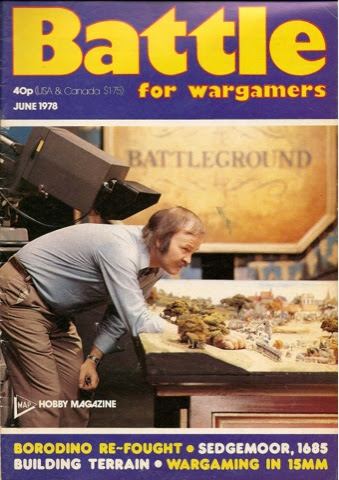 The Cover of the June 1978 edition of Battle magazine, in which there was an article by Terry Wise about the Battleground TV series.


Before I get started on my short series of posts about this venerable aulde TV series from the 1970s, I'd like to acknowledge all the interest in it that many other bloggers have shown, and through which I came to know of, and ultimately love, the programmes. At the end of the series I'll list everyone that I can think of to whom I'm indebted. And, where I can actually remember, I'll also acknowledge where some of the images came from. But to start off I'd like to express my profound thanks to DC, without whose help I certainly couldn't have written this: thank you, sir!


So, what exactly was Battleground? The chances are that if you're reading this, you might already know. But, if this is your introduction to the subject, please let me know via the comments. In essence it was, very simply, wargaming on the telly.

At the time, in an article that appeared in the June 1978 issue of Battle, Terry Wise (author, modeller and writer of rules) enthuses about 'this revolutionary series', with its 'cast of thousands', referring, of course, to the toy soldiers - '11,000 figures to be precise'.
Battleground, produced for Tyne Tees Television would, 'for the first time give viewers the opportunity to see wargaming as it really is'. He further hoped, one might think rather optimistically, that 'the visually exciting side of the hobby should produce some favourable audience reaction for clubs.' 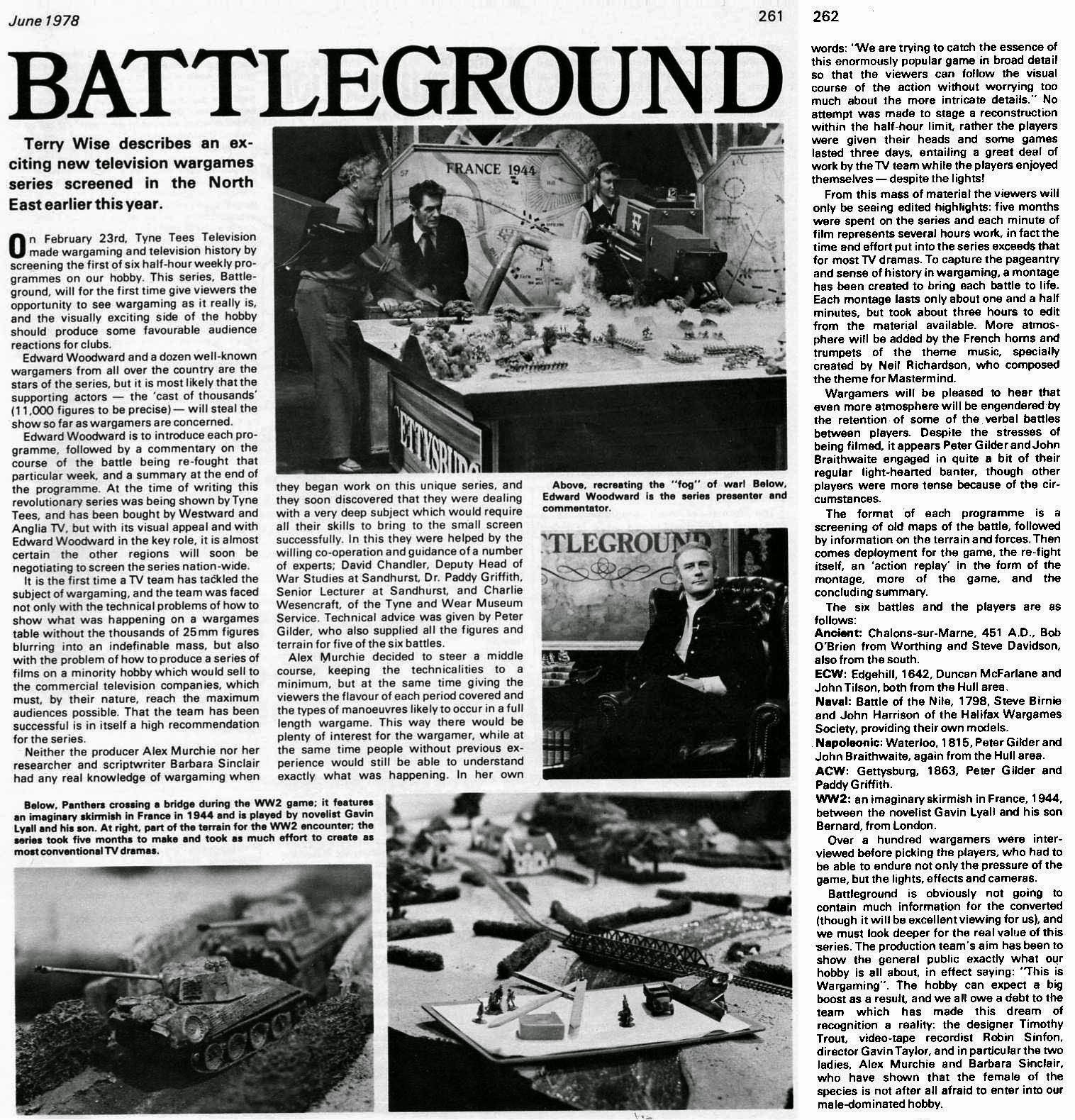 Terry Wise's article, as it appeared in Battle, June 1978.


Well, truth be told, as several other bloggers on this topic have noted, it's quite difficult to make a wargame, which uses a collection of static models, visually exciting in the way TV, a medium of motion, is best suited to (Mind you, having said that, artist and wargamer Cristoph Mueller has recently done just this. See his short film here).

And actually, if we don our pedantry shako - as wargamers are all too often wont to do - and scrupulously dissect Wise's statements, they err a little, inasmuch as wargaming had already been given a starring role in mainstream TV, in the series Callan, and even in the spin-off movie of the same name.
Indeed, this was the reason the new series was presented by Edward Woodward, since he was the star of that TV series and the associated movie.
When I first read about all this stuff, and even after seeing the Callan episode A Magnum For Schneider, I had wondered whether Woodward was genuinely interested in wargaming or not. This question was to be answered by watching the Battleground series, and researching this article, and I'll come back to it in due course. 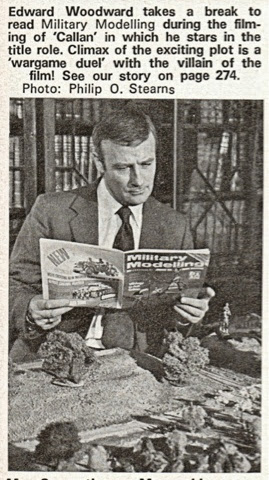 Does this image answer the question I pose above, or is it just an early example of strategic marketing? I found the photo here, alongside some other great pics from the making of Callan.

I might argue that the scenes in A Magnum For Schneider, the original black and white 1967 episode from the TV series, and Callan, the 1974 movie (which was also based on the same plot as Magnum For Schneider), the latter perhaps most of all, do a slightly better job of making wargaming look like a dramatic and fun hobby.
This is in part due to the games being embedded in a thriller about the shady world of hit-men and espionage, and not a little also to the presence of a very beautiful woman - actress Catherine Schell, in the role of Jenny, Schneider's moll - who looks on with a kind of bemused and indulgent half-interest! 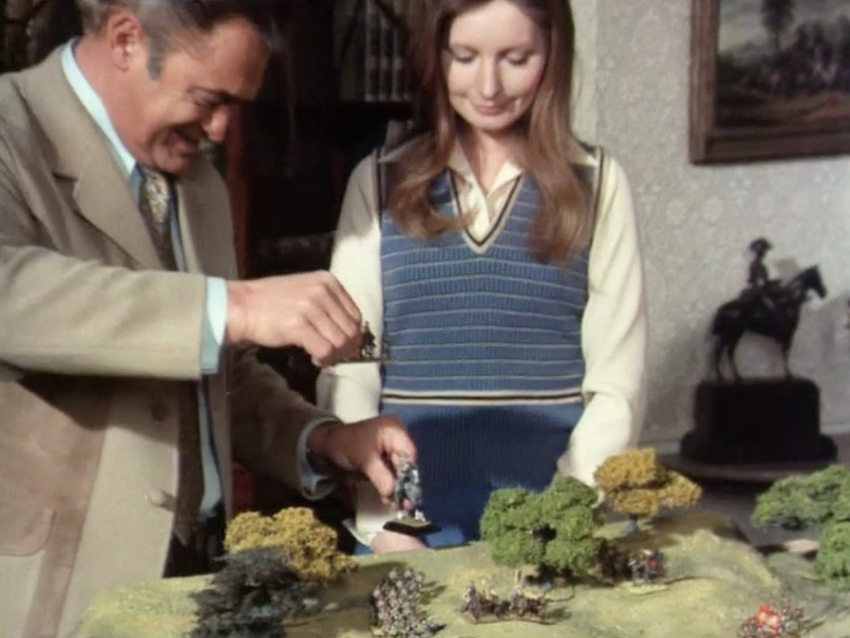 Catherine Schell, sadly not very likely to be appearing at a wargames table near you! Actor Carl Möhner as Schneider perfectly captures the boyish grin toy soldiers bring out in a man.

So, whilst Wise is quite correct in enthusing over this debut for the hobby as a subject in itself, he is in error in the sense that wargaming had already been given a couple of airings at least, in the public eye. I would also argue that neither these Callan related instances, nor the Battleground TV series really show wargaming quite 'as it really is', rather, they show it 'as we might like it to be'.

What do I mean by this? Well, first of all there's the snazzy set, with backdrops, etc. - not to mention the future 'Equaliser' being on hand! - and then there's the fact that, with people like David Chandler and Peter Gilder as advisors, contributors and participants, the audience is treated to what were then the best of wargaming possibilities, in all sorts of respects, from the background research to the quality of the miniatures and terrain.
Of course this was only right, the hobby, in the persons of all involved, did a good job of presenting itself in the best possible light.

But it's a bit like the gap between the best games one often sees in magazines or at shows, and, perhaps, one's own humble efforts: seeing a beautiful car, let's say a Porsche 356 (I just pick this car 'cause I've always rather liked the look of it! I'm not really much of a petrol-head, truth be told.) can make one more aware of and less happy about the fact one owns and drives, let's say, a Ford Focus! 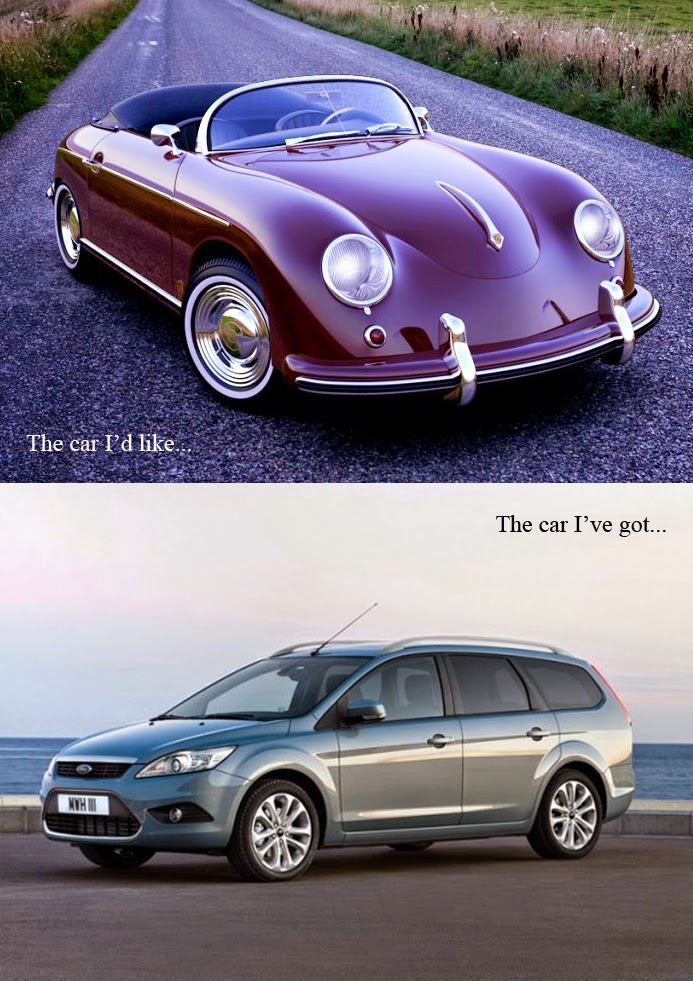 NB: that's not literally my car, it's just a generic pic off't web (altho' it is the same colour!). 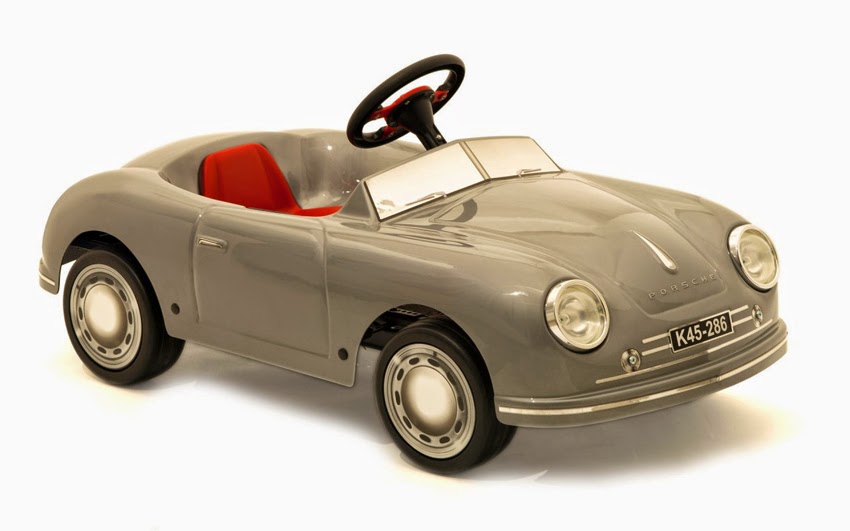 Heck, I couldn't even justify running to this electric toy 356!

It wasn't just Terry Wise that was enthusing about the show in print at the time it came out, there was also a piece by Laurie Taylor, for the TV Times. I initially thought this might be the same Laurie Taylor who hosts BBC Radio 4's Thinking Allowed, but discovered the former - who had acted as a publicist for Tyne Tees TV at some juncture, hence the article - had passed on, whereas the latter is still going strong. 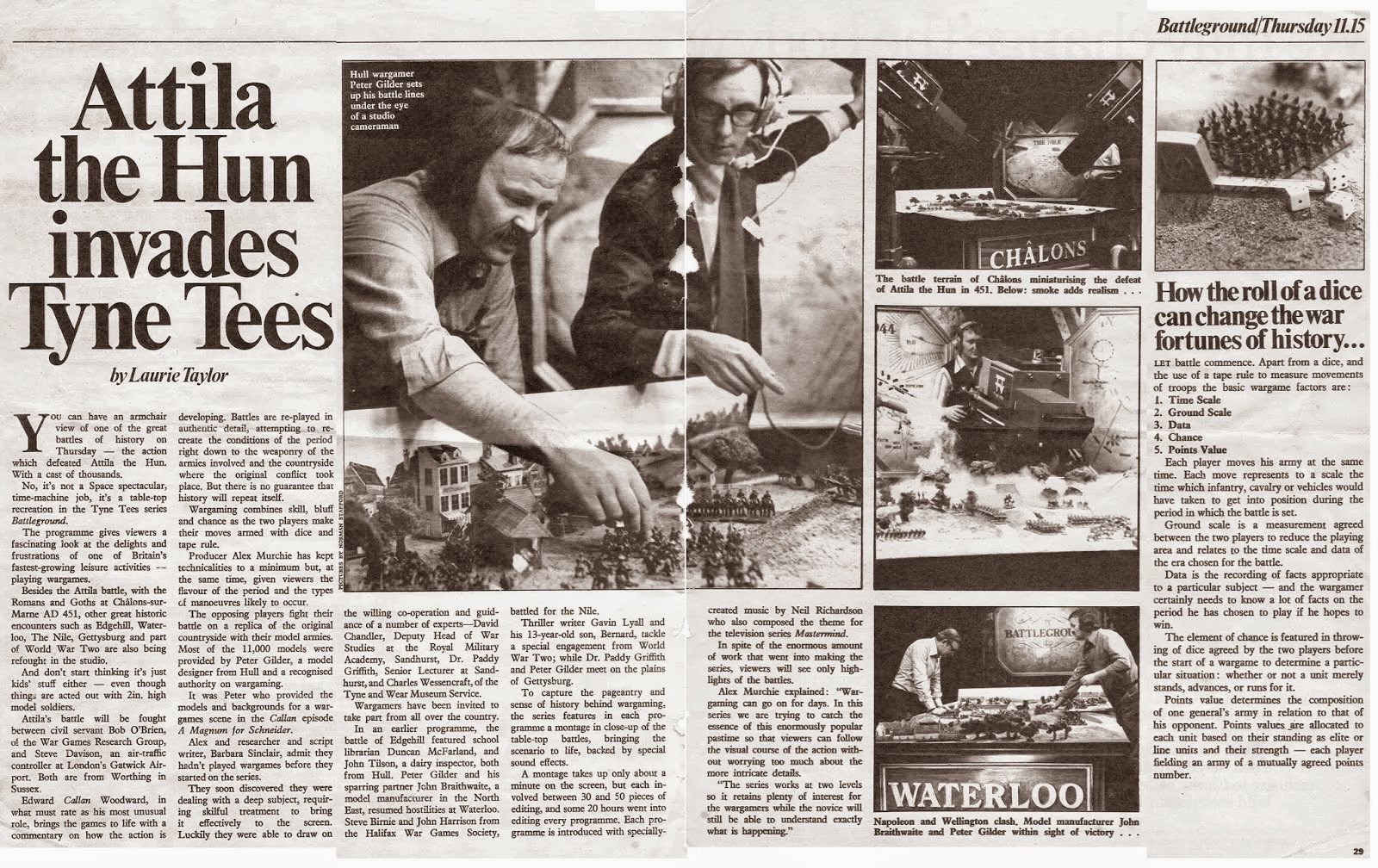 This is the TV Times spread, which, as far as I know, first came to light on't web here.

If you read the texts of both the Wise and Taylor articles, they are very nearly identical, which rather suggests they originate from the same source! There are small differences though, with Wise focussing, as a wargamer himself, on the players, noting that 'Despite the stresses of being filmed, it appears Peter Gilder and John Braithwaite engaged in quite a bit of their regular light-hearted banter, though other players were more tense because of the circumstances'. He also records the fact that 'Over a hundred wargamers were interviewed before picking the players, who had to be able to endure not only the pressure of the game, but the lights, effects, and cameras.' 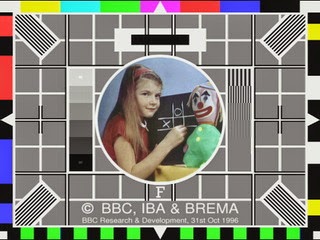 What has this iconic BBC test card image got to do with the Battleground TV series?

In Taylor's piece, which I suspect, as he was the Tyne Tees publicist at the time, was the 'original', the little nugget that we glean, and which Wise leaves out, concerns one of the only members of the production team, besides the cameramen and other anonymous studio 'gaffers', who is not credited.
I'd like to leave that, along with the above-pictured test card, as a bit of mystery, to be unveiled Agatha Christie style, at the end of my story. Can you guess what the connection is?

I quite agree with Wise when he says, right at the end of his article, that 'we all owe a debt to the team that has made this dream of recognition a reality.' He singles out the ladies involved, producer Alex Murchie and scriptwriter and researcher Barbara Sinclair, saying that they 'have shown that the female of the species is not after all afraid to enter into our male-dominated hobby'!
Whether authors writing now would feel comfortable making such comments as this last observation, I'll leave open, but certainly I intend, at the end of this series of posts, to pay tribute to all involved myself, in some small way.
-----