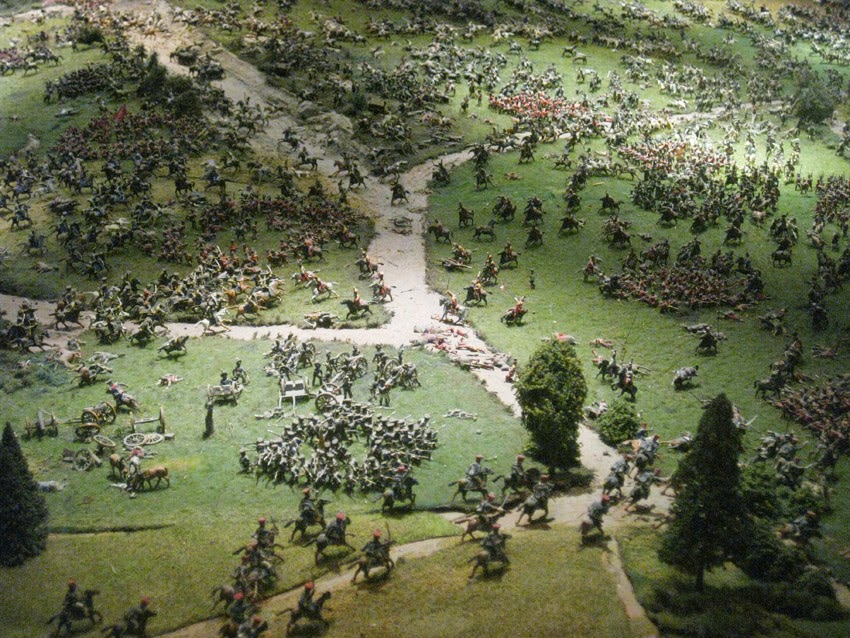 Although this isn't the sharpest image, I like the busy, crowded sense of action. The lighting almost mimics sunlight through broken cloud cover. Certainly this image also conveys the intensity of the action depicted on the superb RGJ Museum Waterloo diorama.

Whilst I'm calling this part II of my series on Waterloo dioramas, it's actually, strictly speaking, my fourth post on subject. But I'm not counting the first two, both on Siborne's models, as I plan to revisit them, take much better pictures, and write much fuller accounts of both.

In the mean time, after my wife and I recently visited Winchester, I now have a load of pics of the Royal green jackets Museum Waterloo diorama. So to day I'll start work on documenting that trip, or rather the model itself. The museum were kind enough to allow me to take a few pics with some of the glass protective doors open. Some of these shots were taken before I worked up the courage to ask, some after. Can you tell which are which?


All three commanders are depicted on the field in this model. Below I show Boney, with his 'grognards' of the Old Guard, Wellington, by 'his' tree, and Blücher, riding into the action (despite his earlier fall at Ligny) in the south-eastern corner. 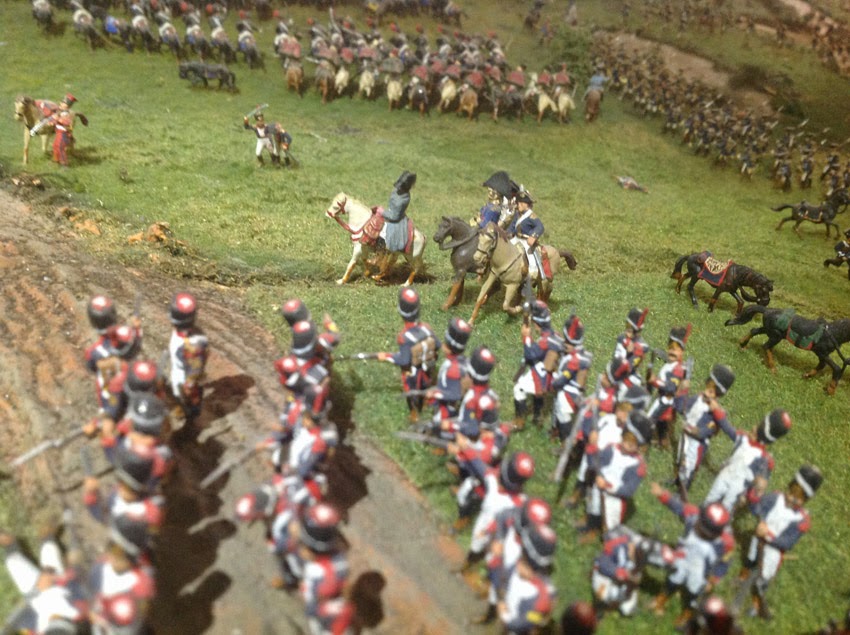 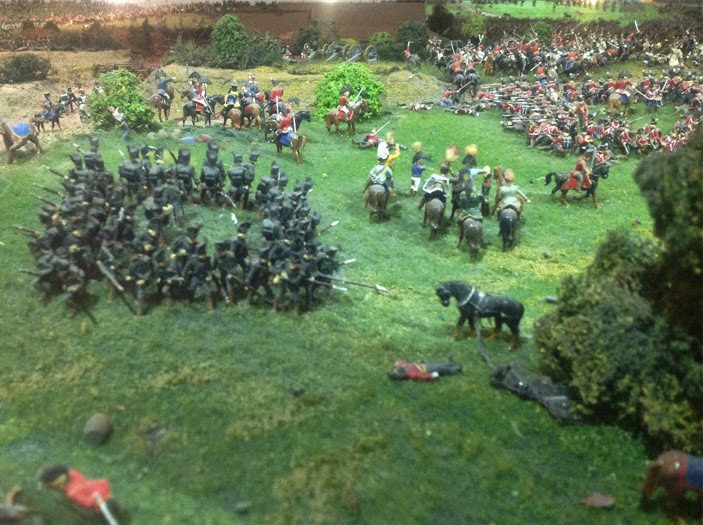 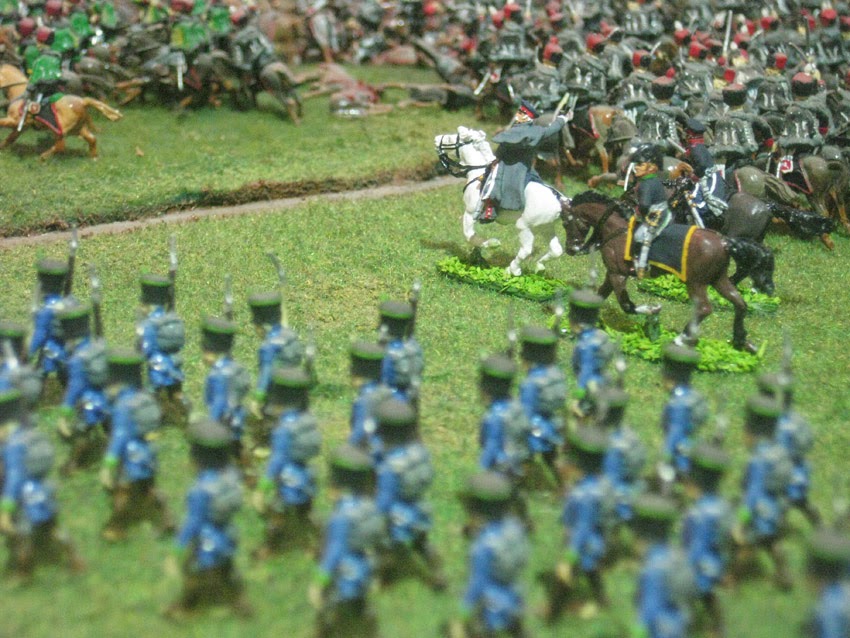 It was pointed out to me, and observant viewers might've noted this already, that Blücher and his ADCs are a lot crisper and brighter than most of the other figures. This is because they're new additions. I was also told that the model is set to undergo a major refurb. It'll be interesting to see how things change. 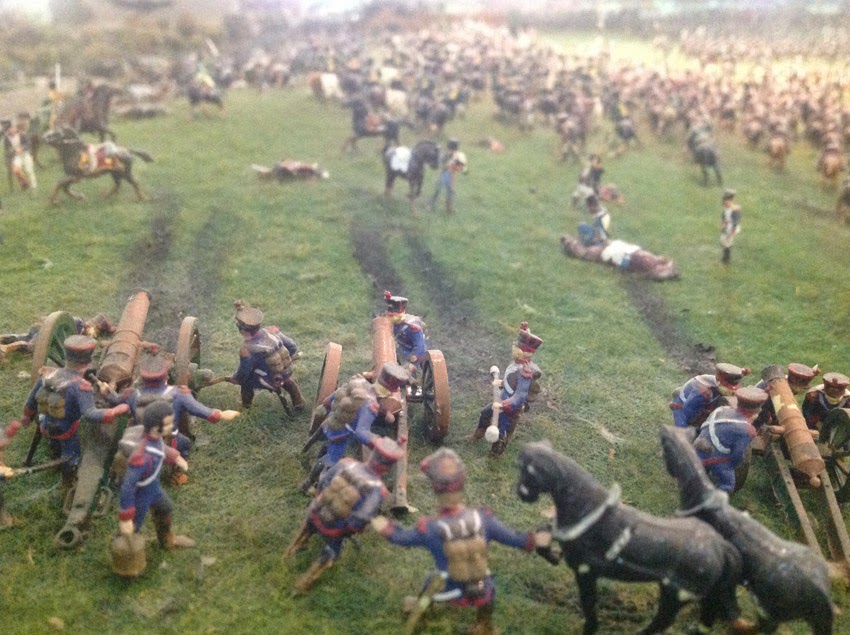 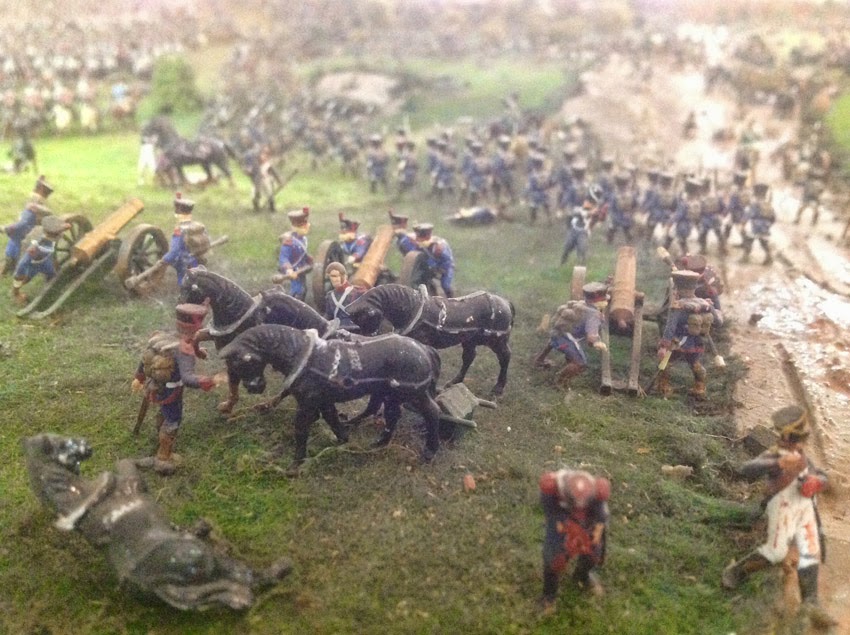 The above two pictures are of a French battery near Hougoumont, on the Frnech left, at the western end of the model. I think the lines, in the upper photo, where the guns have rolled back, are a nice touch. 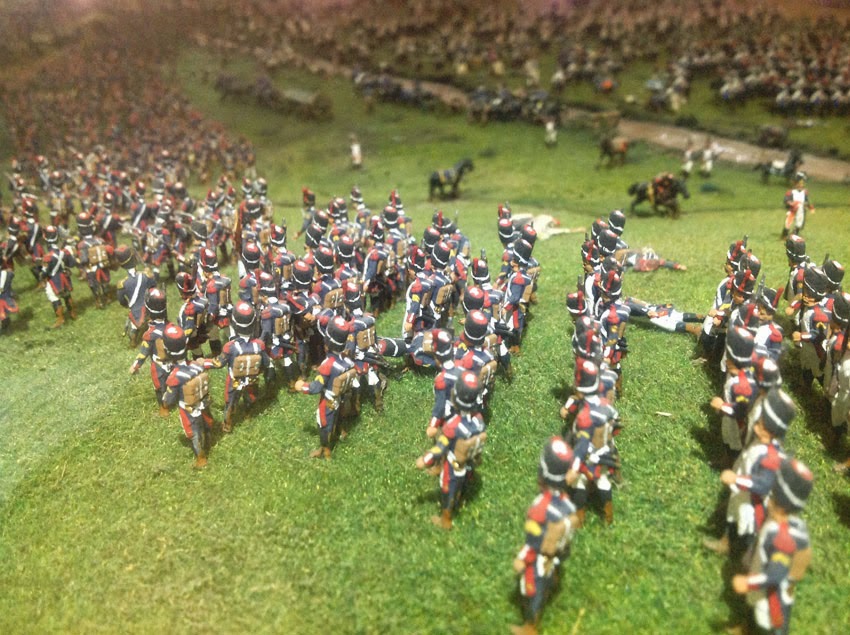 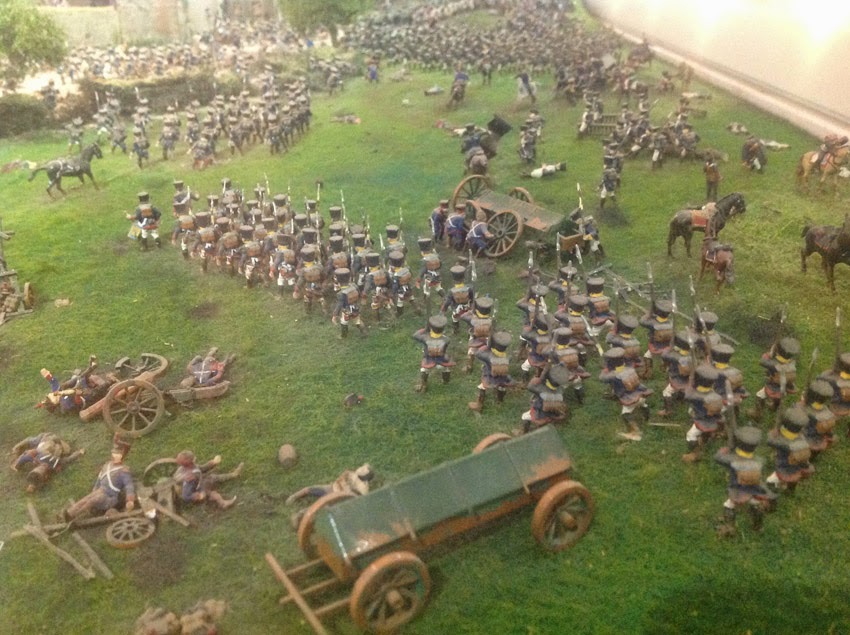 I hope the above two pictures convey that 'big battalions feel. The sweep of the advancing Old Guard grenadiers is quite a nice effect, I think. Whilst the line infantry moving past caissons have a good authentic battlefield vibe 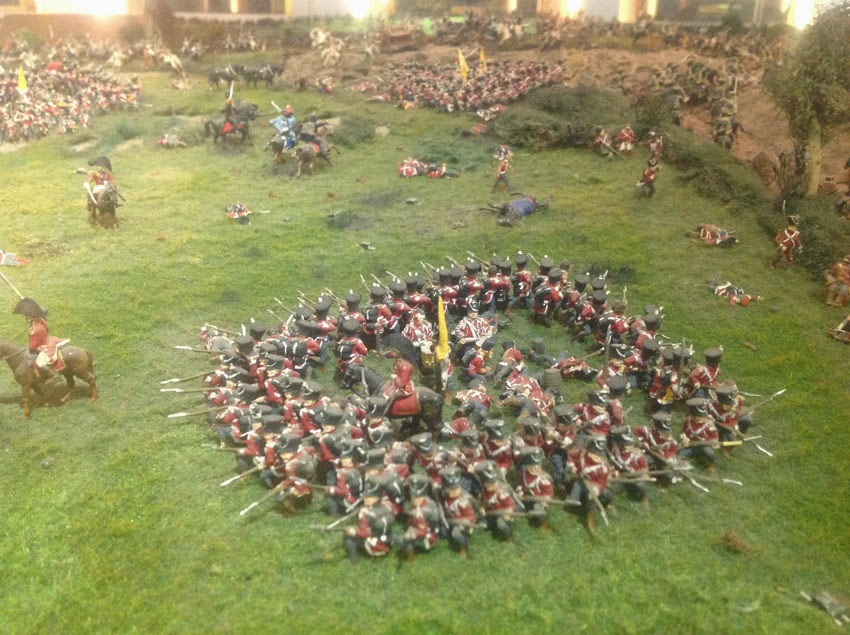 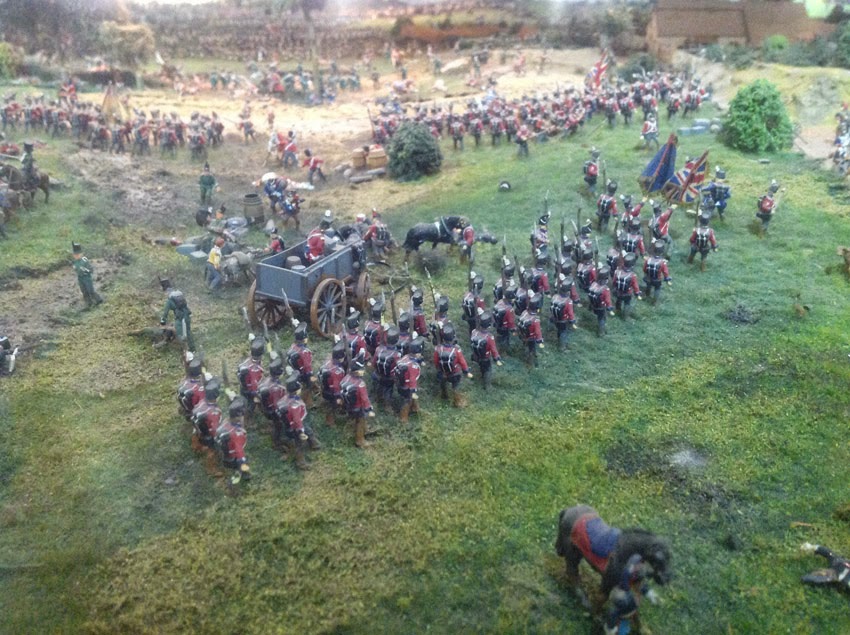 Above are two views from the british side of the field: a battalion in square, and another advancing into the fray, though the messy rear of the lines. There are all kinds of lovely little vignettes, such as the one below, with wounded troops who've been taken to the rear resting amongst trees and being attended to. 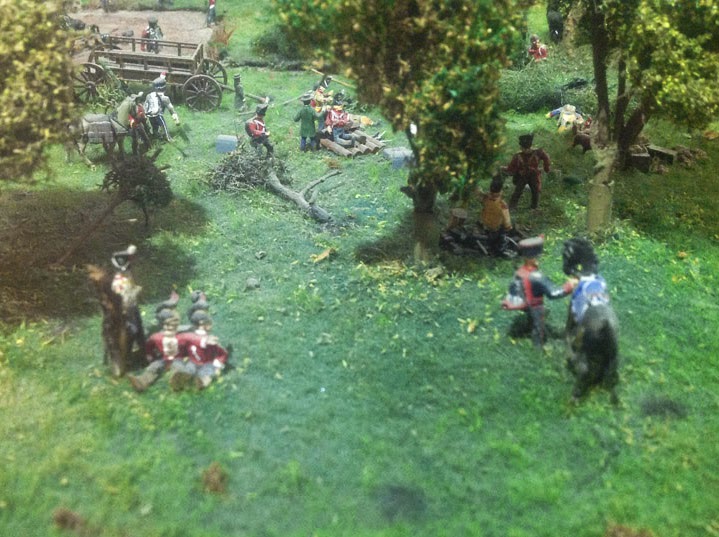 These two pictures of the road, littered with wounded men and abandoned wagons, strewn with battlefield detritus, are, i think, very evocative. And their slight lack of clarity actually give them a bit of atmosphere, almost like those vintage coloured photographs of yesteryear, such as one sometimes sees under the banner of 'WWII in colour', or such like. 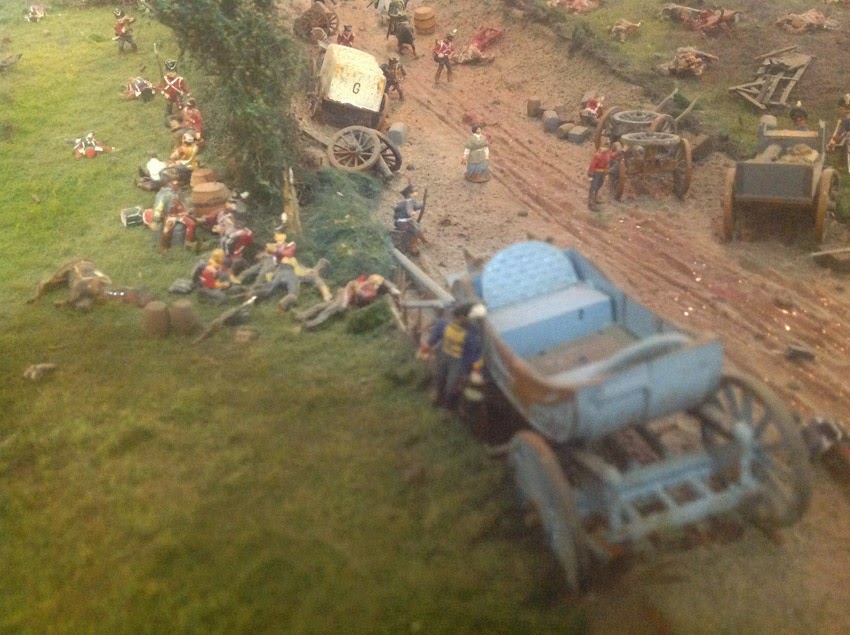 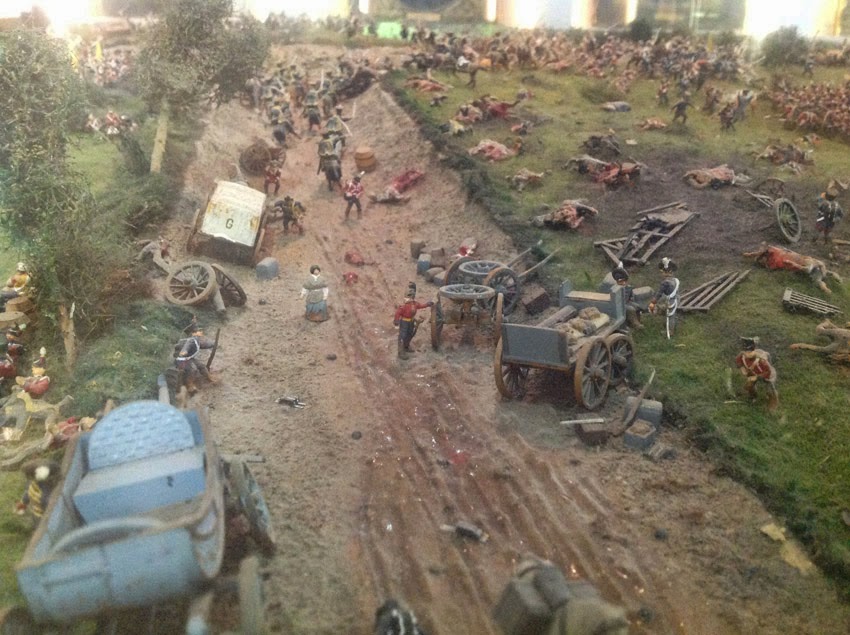 The following pictures are from the sharp end, where the bloody melee is at its fiercest. The scene is the Grand Battery, near the French center, at the extreme point where the Union Brigade cavalry reached, before retiring in a tattered, bloodied mess. 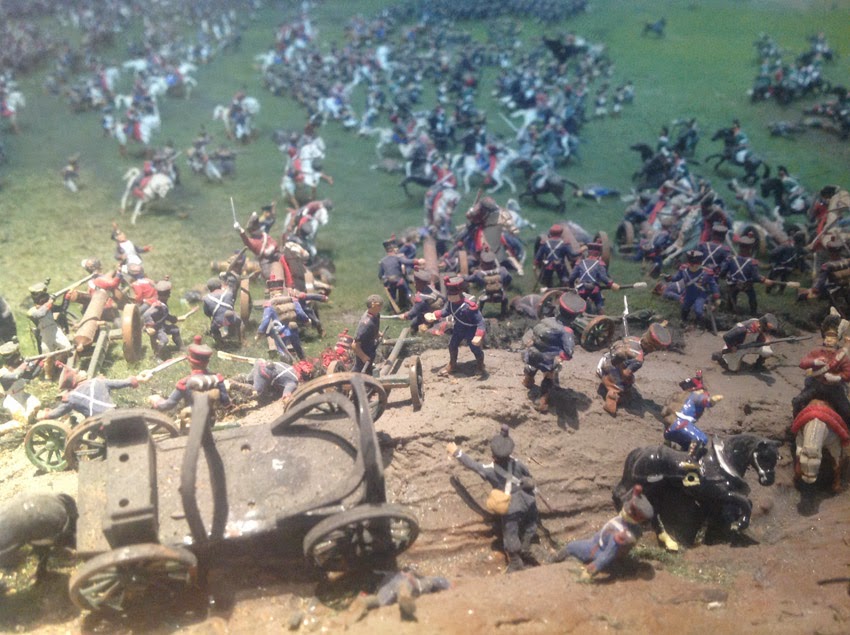 I like the next three as a sequence, zooming out from a close-up of the French officer and Scots Grey, locked in single combat, to a wide-sreen view of the ragged carnage of battle, again just in front of the Grand Battery (and not too far from where Boney and his guard reserves are). 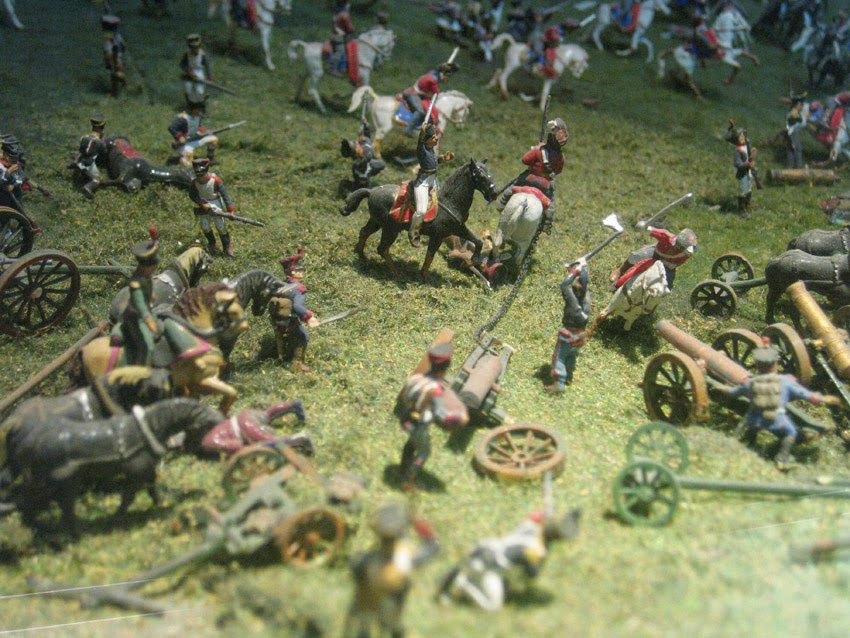 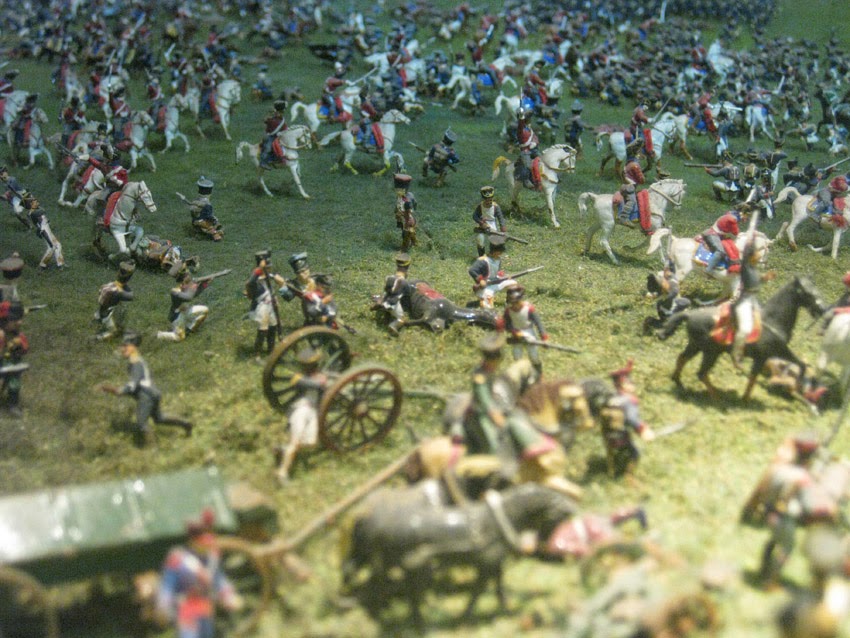 I like this last one, not because it's great photo... it's pretty poor, obviously. but with a tiny bit of adjustment to the brightness and contrast, I think it comes out looking like an old-fashioned hand tinted black and white photograph. 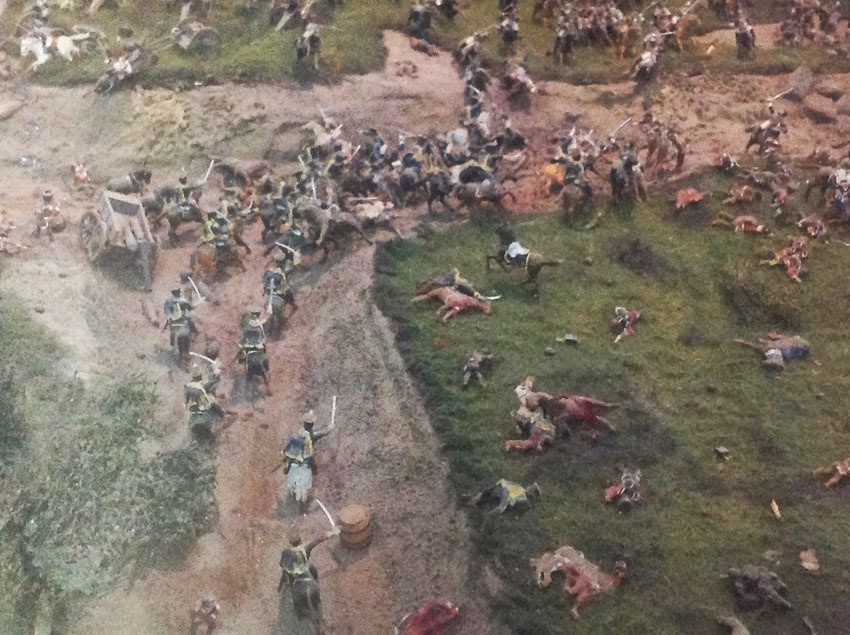 This is just a quick upload, to get the post live; I hope to add more information to this post, as time allows.