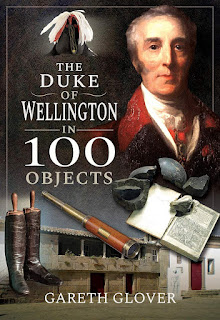 In the venerable tradition started - as far as I know? - by the British Museum's exemplary History of the World in 100 Objects, the book I'm reviewing here today joins an ever growing assortment of similarly themed books on numerous historical subjects. Prolific Napoleonic author Gareth Glover notches up yet more titles, annexing ever more shelf-space, authoring several such books on Napoleonic matters himself, including this one. And there are also titles by other authors, on the Third Reich, and all sorts.

In this book the objects themselves range from the tiny - a looted silver fork - to the massive - castles, stately homes, even whole villages, towns or cities, that Arthur Wellesley had some connection with. From the obvious, like his boots or campaign cape, to the more obscure, like dentures, or the saw used to amputate Lord Uxbridge's leg. 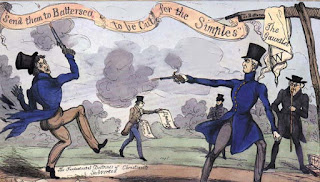 And in the process of examining this wealth of material, which is frequently supplemented by other related stuff, we learn masses about not just the famed and celebrated victor of Waterloo, but his family, the times in which he lived, and the many and varied places his life story connects together. From the Congress of Vienna, to Napoleon's lonely and remote exile on St. Helena. From ancestral roots in Ireland, to nepotistic postings in India. And with his activities and interests connecting him with everywhere from the far-flung, such as to the Americas, to such near neighbours as Portugal, Spain and Northwest Europe.

Wellington doesn't have quite the same the mercurial mythological magnetism that Boney had, and continues to have. At the time of posting this review this book is listed as 'currently unavailable' on Amazon's UK website, unlike the pendant title, also by Glover, on Napoleon in 100 Objects. But, and especially so for the English, he is, and ought to be, someone we want to know more about. And this book does an admirable job of facilitating that. 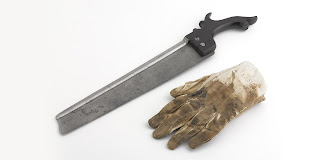 ... to the more macabre. [2]
NOTES:
[1] Wellington infamously duelled Lord Winchelsea, in 1829, whilst he (the former) was P.M!
[2] The saw and a bloodied surgeon's glove, from National Army Museum's collections, allegedly used to remove Uxbridge's shattered leg, at or just after Waterloo.