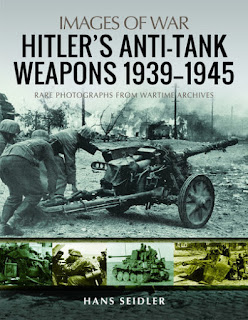 Copiously illustrated, as befits any title in this ever growing series, with contemporary black and white photos, and with three useful appendixes, the titles of which hint at the scope of the coverage - Towed Anti-Tank Guns, Converted Anti-Tank Guns, Hand-Held Anti-Tank Weapons - whether you're a wargamer, modeller, or just a WWII history nut, this is a great resource.

The text is very basic, but sound enough, as far as it goes. Text and images take us from the early war 3.7 Pak 36 to the late-war Pak 43; alongside this there's the development from lightly armoured/gunned Marder variants up to the Elefant and Jagdtiger (the latter the heaviest AFV of WWII); and there are also the handheld weapons, from the Panzerbusche to the Panzerschreck, with disposable Panzerfaust figuring large as the war draws to its inexorable end.

Also duly noted are the many instances of hybrid vehicles, some related to types already mentioned - the evolution of the Panzerjagers can only be briefly covered in such a slim and wide-ranging book - and others such as when guns of various types were mounted to half-tracks, or on vehicles such as the RSO. A nice little touch, after the appendices, are the two contemporary German images showing how to use and the structure of the popular mass-produced Panzerfaust.

Hardly the definitive work on such a potentially huge subject, nevertheless this is an easy to read, well illustrated and highly enjoyable addition to the very useful Images of War series. I love it!
Posted by Seb Palmer at 00:40