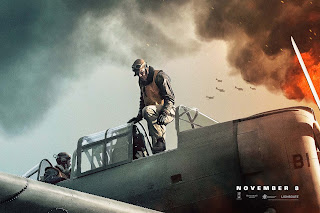 Teresa and I went to see this new epic WWII movie whilst attending Scale Model World in Telford. The Odeon where we saw it has fantastically luxurious reclining chairs. Very nice! The small screening theatre we were in was practically empty. Perhaps 20 odd viewers in a room that might take 80-100. A pity, really, as a full house generates its own excitement.

Never mind that, however... I absolutely loved this film. Every time a modern movie on WWII comes out I have high hopes for it. Hopes that I fully expect will be dashed on viewing. Such was the case with Dunkirk, which I loathed with a passion. So much modern cinema is nowt more than dumb spectacle. I was worried this might fall into that trap.

The attack on Pearl Harbour... 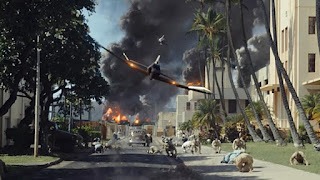 ... is briefly, brutally and excitingly depicted.

Well, in a way it does. It's a massive dose of schlockbusting CGI action, with an overly reverential approach to its square-jawed hypermasculine heroes. In many ways, whilst it professes earnestly to be a true story, however closely it may sail to the facts of events, it is a Hollywood fantasy of sorts. But, and here's the key thing for me, this is both enormous fun, and highly exciting drama. Emmerich also gets quite a lot in: we start before the war, jump to Pearl Harbour, and get to Midway itself via The Coral Sea, the Doolittle Raids and so on. 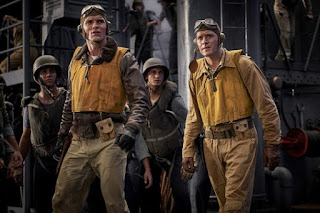 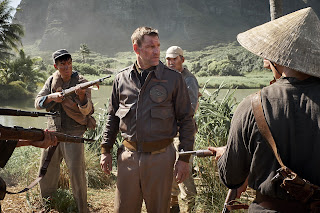 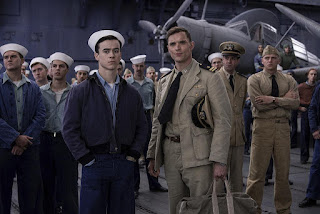 An ensemble film, with a host of characters, events unfold at numerous levels, including both the domestic and the military (with the accent heavily on the latter!), depicting all involved, from top brass to lowly rankers. The group of characters we follow through these events are sufficiently engaging to keep us interested in the bigger picture as it develops.

All the actors acquit themselves well. Characters like Layton (Patrick Wilson), the intelligence guy, pilots lieutenants McClusky and Best (Ed Skrein and Luke Evans), and man at the top Chester Nimitz (Woody Harrelson) are solid in the chief roles. But, offhand, I might pick out Dennis Quaid as Admiral Halsey and Nick Jonas as Machinist's Mate Bruno as two particularly engaging characters. In that respect this resembles old fashioned WWII epics like The Longest Day and A Bridge Too Far. And it actually trumps these old movies thanks to ever improving CGI. 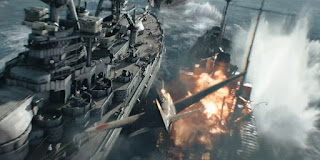 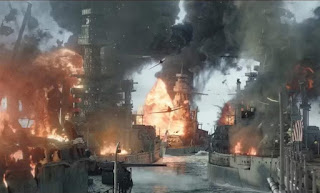 Epic scenes such as this are the meat and potatoes of this movie.

CGI was once a pet hate of mine, and occasionally still is: when a film looks like a PlayStation promo, or the CGI is simply unconvincing, I detest it. But in this film it makes for some truly epic and yet credible shots/scenes. Whilst we're on the technical side; the sound design of Dunkirk irritated and even appalled me. This, which when seen on the big screen is a veritable assault on the ears as much as the eyes, succeeds. The battle scenes - especially the aerial assaults on the ships - are incredibly intense.

I enjoyed this so much I'm sorely tempted to get back to the cinema in short order, and watch it again.  I don't think it's a truly great film. The characterisations are pretty thin, and it's all a bit chest-thumpingly manly. But I loved it, and enjoyed it enormously. If you think you might enjoy seeing Midway and the events leading up to it depicted in a fun action packed and yet epic but believable manner, I'd recommend Midway wholeheartedly.

This image is a fair representation of the excitement the film achieves. 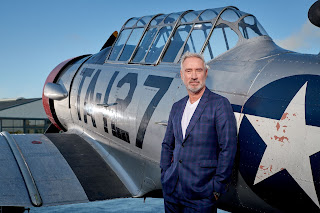 It was also interesting, as a kind of footnote, to find out (after watching the movie) that Emmerich had to finance this very Hollywood style production - the big studios were chary of another lavish WWII epic, many of which over the years have cost a lot and then flopped - outside the normal fiscal channels, including taking a cut in his own fee. I really hope this makes Emmerich and everyone involved a healthy profit!
Posted by Seb Palmer at 07:35