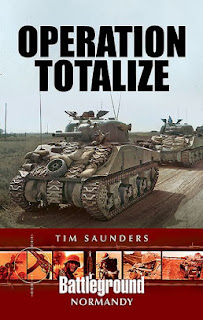 This follows on nicely from Charles More's Arromanches to the Elbe, which I read and reviewed recently. That book follows 144 RAC from Normandy to Germany, and includes coverage of their part in Operation Totalize [1]. It's great to be able to zoom in on a more detailed view of one component of the larger picture. 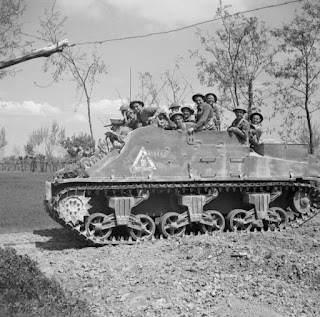 The Kangaroo, a 'de-frocked' Priest, was a product of Totalize. [2]

It's also of interest to me as my grandfather served in WWII, in the Canadian armed forces, and Totalize was a joint Anglo-Canadian affair. I had hoped Bert might've been involved in these events. But a chat with my dad at the weekend suggests that he probably spent the duration based in the southern U.K. (due to an injury sustained in a military traffic accident). Still, my Canadian connection remains!

I initially found the level of detail pretty hard going; there's an awful lot of unit names/numbers, and movements, and many, many maps, of very varied quality. But at the time I started this review I'd just finished chapter seven, which deals with Kurt Meyer's German counter-attack. The combination of maps and firsthand testimony, as well as regimental histories, etc, is superb. This is the battle during which Tiger ace Michael Wittman was put out of action by radio-op turned gunner Joe Ekins. [3] It's very vividly portrayed, making for an exciting and compelling read. 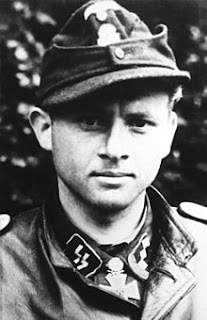 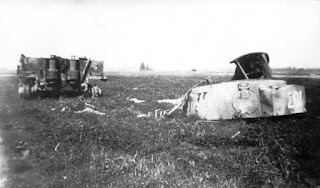 Wittman's tank after Ekins was done with it.

It's now some time later, and I've finished the book. Rather like Totalize itself, it kind of fizzles out, with the Allied forces partially achieving their objectives, and their German adversaries partially succeeding in containing them. But I found Saunder's account, overall, to be very interesting. It's amazing just how much material there is on WWII, and within that there's so much again, from broad perspectives (I have a book called The Second World War Explained on my 'to read' pile) to super-detailed blow-by-blow accounts of specific operations, such as this.

[1] The 'z' in the spelling of Totalise is deliberate, U.S./Canadian style.

[2] M7 Priests on loan to British and Canadian forces had their armament temporarily removed, and armour-plates added to fill the resulting voids, so as to create APCs to deliver troops into battle alongside armour.

[3] Rather surprisingly, given how effective he proved as a gunner - he knocked out several other German tanks in this engagement - Ekins was returned to his radio duties, never to fire a gun again!
Posted by Seb Palmer at 01:07